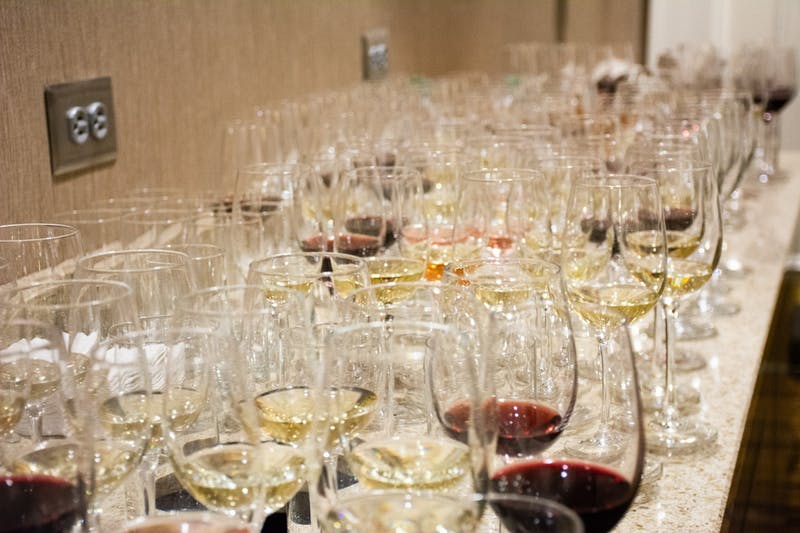 Some Auburn students may have heard through the grapevine about Beverage Appreciation, a class where students get to taste alcohol for credit hours.

The main purpose of Beverage Appreciation, offered through the College of Human Sciences, is to familiarize hospitality management majors with alcoholic and non-alcoholic drinks they might serve in their careers, especially students on the incoming culinary science track.

David Martin, associate professor of nutrition, dietetics and hospitality management, is an instructor of the course in the summer and said Beverage Appreciation aims to teach students about the distribution, production and retail sales of beverages like wine, spirits and coffees.

“We look at the general industry and market through a three-tiered system so that students have an idea of what jobs exist out there, what paths exist from a career perspective and the major players in the industry,” he said.

Martin said the course has a significant focus on wine given the importance of the beverage within culinary science, but it can also guide students into opportunities with other beverages.

“Students can take that experience and use it as a gateway to other areas,” Martin said. “We have a lot of students after taking that class that are more interested in beer, so they might connect with our brewing science program.”

Andrew Barnes, adjunct professor and a Beverage Appreciation instructor in fall and spring semesters, said he has also seen students both in hospitality-related majors and elsewhere outside the College of Human Sciences gain a lot from the class.

“Knowing fine dining etiquette, being able to navigate your way around a wine list [and] being able to prepare wine with food at a dinner party are great networking skills, which is why [the class is] attractive to people outside the major,” Barnes said. “For people inside the major, they very well may be working in a fine dining restaurant or hotel that has beverage service, they may be working at a bar or as a sommelier at a restaurant or general manager.”

Martin said the course has been offered since before he came to Auburn in 2010. Since he’s been at the University, students who’ve developed an interest in wine from enrollment in the course have gone on to take internships in Napa Valley, California — highly regarded for its vineyards — and win sales awards at E. & J. Gallo Winery in Modesto, California, Martin said.

One of the primary goals of the course is for students to pass the introductory level of the Certified Sommelier Examination, developed by the Court of Master Sommeliers, an examination board based in the United Kingdom. The College of Human Sciences offers the exam at the University, with three Master Sommeliers visiting campus to proctor the exam, which is conducted once per semester.

“We go through a formal tasting process and we’re helping to prepare students pass their … exam, which is a great add-on,” Martin said. “If they pass that, [they are] able to put that on their resume that they’re a level-one sommelier. That … opens so many doors from a job perspective.”

Preparation for the exam involves a two-day crash course session the last weekend of the class, with the exam being held the Monday after, Martin said. Students also have the option to take the Society of Wine Educators’ Certified Specialist of Wine Exam. Martin said the CSW Exam typically costs several thousand dollars out of pocket, but through a sponsorship by Trinchero Family Estates, a winery in St. Helena, California, students spend four nights in Napa Valley and receive study manuals and online seminars to prepare for the exam.

Barnes said he believes the Southern hospitality found in Auburn students has led Trinchero to hire several graduates full-time in recent years and maintain its sponsorship with the University.

“It definitely is something that is a differentiator of our students: the natural politeness, the natural servant orientation of putting others first is very attractive to this industry,” Barnes said.

Martin said he has seen several years of students begin the class with little to no interest in wine who choose the industry for their profession, which he said he has found “most rewarding” as an instructor.

“Students are competitively selected [and] that’s all free for them,” Martin said. “To give an idea: the vast majority of people that are working professionally in the wine industry with distribution don’t have their level-one [sommelier] certification.”

Andrew Young, a 2020 Auburn graduate in agricultural business, is among those whom Martin said greatly grew professionally and is now a level-one sommelier. Young might be best known by his TikTok handle, @tastefullybuzzed, in which he reviews budget wines for a young adult audience using his knowledge from Beverage Appreciation and the Certified Sommelier Examination.

“I wanted to start a YouTube channel and do it, but a friend convinced me to do it on TikTok instead with the shorter format and ease of reach with people,” Young said. “I was surprised with how much it took off, but it’s been a lot of fun so far.”

Young established his TikTok presence in October 2020 and now has nearly 30,000 followers ranging from locally in Auburn to overseas in France and Germany, with his most popular video receiving almost 430,000 views. Here’s one of Young’s TikToks:

“There’s a couple other people on the platform that are doing stuff like [me], but nobody that I have seen is doing wine,” Young said. “Most people are doing beer or seltzers or stuff like that so I saw that there was a market for it.”

Young recently began work as a sales consultant for Southern Glazer’s Wine and Spirits, an alcoholic beverage distributor based in Miami which he said has been “a great job so far.” He said he is grateful to begin a career as a 22-year-old sommelier fresh out of college.

Young said he was first introduced to the course by his fraternity big brother who enrolled in the class while at Auburn and who is now a beverage coordinator for Troon Country Club in Scottsdale, Arizona. While in the course, he developed a camaraderie with Martin, the professor.

“David Martin was a pretty big influence on me — a mentor and a friend,” he said. “The Beverage Appreciation [class] was a lot of fun, it was really fun to take a college class where you’re drinking. I had some background in wine already, so most of that class … was more so just further explanation and continuing education, especially on the tasting side.”

As for himself, Young hopes to use the agricultural aspect of his degree for a future in wine and grape production in a state like Virginia, Washington or Oregon.

“Virginia actually has a very, very good wine region that a lot of people don’t know about yet just because it’s a commonwealth state and it’s hard to get the product of the state,” Young said. “I did a tour up there with my parents and went around to five of the different vineyards there, and it was really fantastic.”

The University is scheduled to finish construction on the Tony and Libba Rane Culinary Science Center next year and open the facility by fall 2022, which Martin said should allow the Beverage Appreciation course and the Department of Nutrition, Dietetics and Hospitality Management room to grow.

“We’re going through a big process right now where we’re revamping all our classes,” he said. “As far as the wine class goes, we’re going to have an absolutely unbelievable wine room designed just for wine tasting.”

Beverage Appreciation classes have traditionally been taught at The Hotel at Auburn University and Dixon Conference Center but will be moved to the Culinary Science Center upon opening. The opening will follow other moves the College of Human Sciences is making to further diversify its foray into culinary science, such as the introduction of a master’s program in brewing science this fall, according to Martin.

Barnes said because of the potential of the new facility, there is discussion of having a form of the Beverage Appreciation class for those below legal drinking age, classes focused on Old World and New World wines and a class dealing more with brewing given the introduction of the master’s program.

Beverage Appreciation takes place one day a week for students aged 21 or older and is offered in the fall, spring and summer semesters. Hospitality management majors receive priority during the standard academic year, but during summers, the class is open to anyone and occurs 10 consecutive days of the semester over two weeks.

At the time of publication, there are still a few spots remaining for the summer 2021 Beverage Appreciation course, and Martin encouraged students who might be interested to consider enrolling. Though the timeframe of the course is condensed into two weeks, he said the material taught is still the same and can be more beneficial given students can more easily recall what they tasted in the previous session.

“During the [academic year] it’s great, but you meet once a week so you’re not going to remember what you tasted two weeks ago,” Martin said. “In [summer], it’s nice because you’re able to really compare and contrast day after day what’s happening.”

Home Videos The WORLD of WINE – Wine News. Cheap wine, tasting notes and cooking with wine The World of Wine – May 2021 … END_OF_DOCUMENT_TOKEN_TO_BE_REPLACED

How to visit Napa Valley on a Budget. In this video Carson and I explain a few ways to enjoy Napa on the cheap. Tip and advice about how to visit Napa … END_OF_DOCUMENT_TOKEN_TO_BE_REPLACED

Home Videos Get To Know Argentina Wine | Wine Folly If you love Malbec, Argentina is your ultimate wine region. But that’s not … END_OF_DOCUMENT_TOKEN_TO_BE_REPLACED