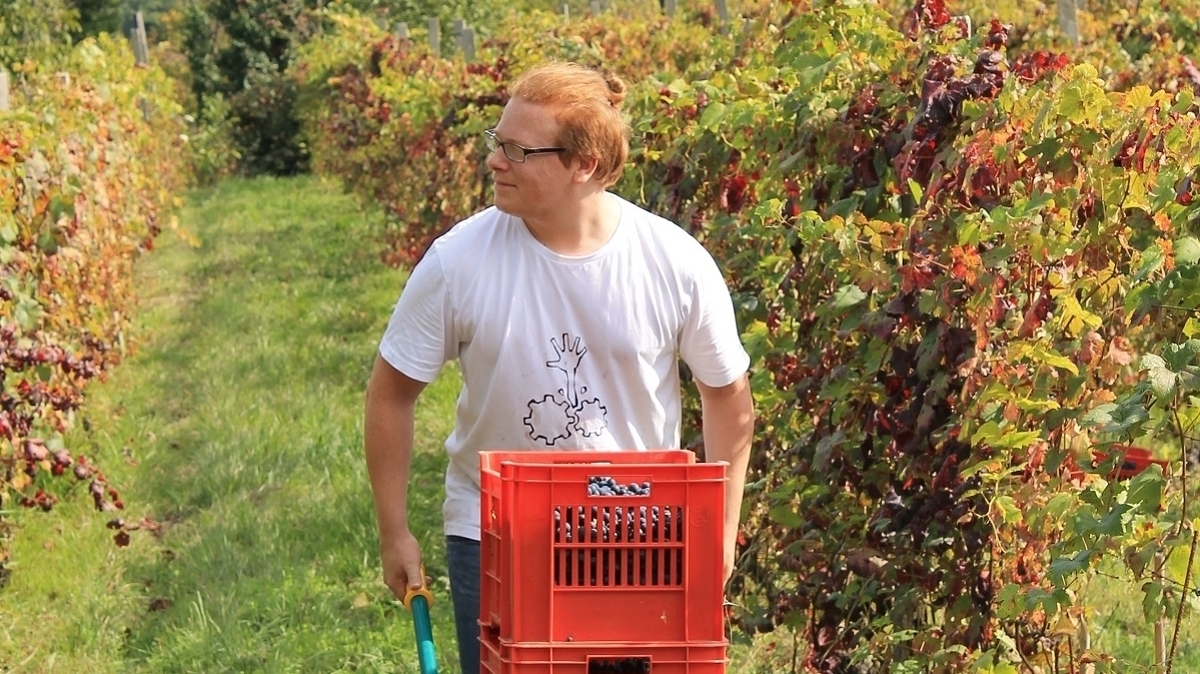 “There is a thin line between courage and stupidity.”

That’s the line that intrigued me. It’s one of the first things you see when you load Hundred Days up, even before the main menu. But why? This is a gentle game about making wine. A game about taking on an abandoned winery in Italy and returning it to prosperity. It’s part card game, part management game, part puzzle game. What business does it have with philosophy? Unless – and this is what gnawed at me – unless there was a secret behind the game I couldn’t see.

Yves Hohler lived in Switzerland until he was five years old, and
his parents led an unconventional life. They would move around a lot, between Switzerland and France, carting him and three other siblings around as they found work picking herbs on farms. Have you ever eaten those nice Ricola sweets? They come in a bright yellow packet that looks like it should have cigarettes in. His parents would pick the herbs for them, as well as strawberries for yoghurts. They did it because they liked the lifestyle. “My parents are the last hippies on Earth,” Hohler says, affectionately, I think. “And what they wanted,” he tells me in a video call, “[was] that we grow up on land, not in a city.”

One day, having just moved back to Switzerland from France, they came across a newspaper in the bottom of one of their boxes, and in it they found a snippet advertising a house for sale in Italy. They were not people for sitting on an idea. “They went to Italy, they looked at it and they bought it,” says Hohler. “Straightaway.”

It gets better. “They couldn’t speak Italian.” And better: “They knew nothing about producing wine.” And better: “And this abandoned house had no heating, and it was winter, and it was like half-a-metre of snow.” To recap: that’s six of them, the youngest being two six-month-old twins, living in a freezing cold house where it rained in the cellar, but they had no money left for repairs because it was all spent buying the place. Courage or stupidity? It’s the exact moment the line refers to. “For me it was an adventure.” Then in his jovial but matter of fact way, Hohler adds: “My mum was crying.”

Yves Hohler is the lead designer of Hundred Days, and really, this is the game of his life, hence why it’s so uncharacteristically personal for a simulation game, and why it feels nostalgic, as if someone were reminiscing over a glass of wine itself. It’s not a retelling or anything like that, and it’s not a story game, but you can feel that it’s rooted firmly in something real, and from that comes a wonderful wash of authenticity, covering everything the game tells you and that you do. It’s a lovely, warm place to be.

They made a go of it, over there, his family. They might not have known anything about winemaking, but they did know about fruit farming, particularly apples, so they dug in and applied what they knew to grapes. And it worked. No one else in the region grew in that way, you see. They grew for quantity, not quality, like Hohler’s parents, because it wasn’t a wealthy area. But they championed organic and biodynamic farming winemaking before anyone else in the region did, and as a result, several hard years later, won over the biggest wine critic of the moment with their Barbera red wine.

It was all going very well. In 1990 they opened, in ~1995 they were discovered, and things continued to go well for a decade after. “Then unfortunately, in 2007, my mum passed away.”

In the background, Yves Hohler had been learning about wine. How could he not? From year five onwards, after he arrived in Italy, wine was the consuming focus of his family life. And the older he got, the more he could help. “We were labour!” he laughs. Curiously, he never drank wine with his family, though. There wasn’t wine at the dinner table or in the bottle before bedtime, or anything like that. “I never drank with my parents,” he shrugs. “It was something I… I don’t know why.” But he would drink it at university because he had to. He studied viticulture (wine growing) and phenology (biological life cycles) in the beautiful historic town of Alba, in the Piedmont region, and trained to follow in his parents’ footsteps. “It was my reality: I grew up in the cellar,” he says. “It was my path and my passion.”

When his mum died, it understandably took its toll. His father’s mental health suffered, fastforwarding Yves’ plans, as he stepped up and in. “I took over the winery,” he says, “and I put all the energy into keeping the family together.” He would run it for two years, but sadly the relationship between him and his father became increasingly strained, and when his father’s mental health suffered a further setback, they fought, and Yves left.

The six months he spent sleeping on a sofa at a friend’s house mark a turning point in his life. Until then, no other passions had been allowed to emerge, his life had always been about wine. But now it was about to change. “I had two passions,” he says: “one was wine and one was video games.” Indulging the latter, he set about learning to program and to make games. And this tinkering led him to a job in Turin, where he’d meet the people he needed to co-found a game studio of his own: Broken Arms Games, maker of Hundred Days.

This was 2011, though, and a long time before anyone thought of making a game about wine, strange as it sounds given Hohler’s background. Perhaps he simply wanted to get away from wine. Instead, Broken Arms Games dabbled in mobile motorbike games, trading card games, and eventually a twin-stick shooter for consoles and PC. I’m not going to name them because you won’t have heard of them. Hohler is okay with that.”It was part of the process,” he shrugs, and laughs.

In the end, it took a friendly hand on the shoulder, from “a big player in the industry” to redirect their attention inwards. “Note your background,” they were told, and so the idea for Hundred Days was born.

Wine is trending – did you know that? I didn’t. But apparently it’s all over Instagram and Twitter. “I think it’s millennials,” Hohler says. “The culture around wine is elevated more than just drinking to get hammered.” He credits it to the rise of in-depth cooking shows like Chef’s Table on Netflix, which is wonderful by the way – more of a documentary about the culture and philosophy surrounding a chef rather than only the food they make. “And all this curiosity about eating and drinking, it’s exploded in the last five-six years.”

Yet, he still sees a stigma around wine. It’s that snooty old perception that you have to be educated in the art to know what is good and what is not. And what surprises me about Hohler is that he doesn’t subscribe to this view. In fact, it’s one of the fundamental reasons he wanted to make a game about wine: to gently teach people more about it.

At one point ask him for his top tip about buying wine, thinking I’ll get a few good bottle recommendations for you (he is drinking a lot of Blanc de Blanc sparkling wine at the moment, and Barbera or Barbaresco in the winter, but it’s much cheaper there, where it’s made) but I don’t. Instead, he pauses for a long time to give me an answer about smelling wine instead. Try to find which is your stronger nostril, if you have one, and then really focus on the smell coming from the wine. And that’s it: that’s his tip. “When you do this, you finally really smell the wine,” he says. “And this rings people to really understand which one they really like.”

He explains further: “What you are seeking, normally, is to understand if the wine you like is a good wine or not. This is the first question that a rookie has. And this is a wrong perception. If you like it, it’s good, because it’s subjective.”

So is it okay to say I like Lambrini now?

It’s that philosophy which boils down into everything Hundred Days is about. Yes, there’s a mountain of winemaking knowledge in the game, but it’s distilled down into small, approachable pieces you can deal with. That’s why it’s a card game. Cards represent the winemaking processes, and you choose between a few to play each round. That doesn’t sound hard, does it? Meanwhile, the story guides you and the sunny colours relax you. The result: a lovely, drinkable Barbera from the region of Piedmont.

His father used to tell him making good wine was like making jam, and it all starts from the grapes you use. “The quality of the grapes is king,” Hohler echoes now. And he misses it, making wine, as I suppose you would while making a game about it. So, he’s making wine again. He’s using a tank at a friend’s winery to make Barbera, but it’s only a small tank, only making 2000 bottles, which apparently constitutes “small”.

Perhaps it’s his way of offsetting the amount he’s quaffed during the making of this game. “I show you something,” he says at one point, reappearing a moment later with a huge vase of wine corks, holding them up self-explanatorily and somewhat triumphantly. “For the good and the bad,” he grins. But for the wine he’s making at his friend’s place, he only buys the grapes. He doesn’t have time to oversee everything.

His dad does know he’s making a game about wine. I ask if they’re on good terms and he replies “neutral”, and when I ask what his dad thinks about the game, he says, “Ah, he is proud.” It seems like a sad way to end both my story about him, and his story about winemaking, given where it all began. But there’s hope for a more wholesome ending yet. You see, what Yves really wants to do is buy the family winery for himself, to go full circle and back to where his wine adventure began. And if sales of Hundred Days are strong enough, who knows? Maybe he can.

Maybe he’ll be able to follow in his father’s footsteps directly. Maybe they’ll even be able to make wine together again. But there’s no question about whose wine will be better. “Oh my father for sure,” replies Yves without hesitation. “But I will beat him one day.”

Home Videos The WORLD of WINE – Wine News. Cheap wine, tasting notes and cooking with wine The World of Wine – May 2021 … END_OF_DOCUMENT_TOKEN_TO_BE_REPLACED

How to visit Napa Valley on a Budget. In this video Carson and I explain a few ways to enjoy Napa on the cheap. Tip and advice about how to visit Napa … END_OF_DOCUMENT_TOKEN_TO_BE_REPLACED

Home Videos Get To Know Argentina Wine | Wine Folly If you love Malbec, Argentina is your ultimate wine region. But that’s not … END_OF_DOCUMENT_TOKEN_TO_BE_REPLACED