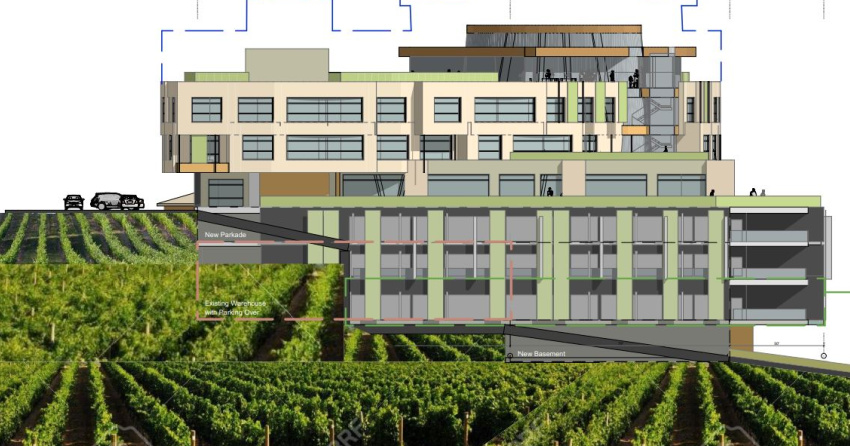 Summerhill Winery’s vision of an onsite culinary college with a focus on developing sustainable food culture is one step closer to reality, but there are still a number of hurdles to clear.

That meant a question and answer period with the Summerhill team during today’s council meeting, which culminated in a vote in favour of moving the project forward to that ALC step.

Today’s approval didn’t come without a decent amount of questions and criticism, however, with council’s main concern being the size of the proposed building.

The winery has proposed a 37,000 square foot building that would include large kitchens and classrooms, wine tasting rooms, 150 beds, parking and more.

Councillors Luke Stack, Mohini Singh, Gail Given and Ryan Donn all zeroed in on the size of the building and the number of beds it would accommodate.

The vision for the Culinary College for Humanity project is to have a space where students and staff members could stay at the winery while they were enrolled in classes or a program.

Some programs would be on your typical school schedule of September to April, while others are just a few days or a couple weeks in length.

The Summerhill team, led by the Cipes family, stressed that the accommodation would only be used for people enrolled in the college.

“You can’t just book a room and stay at this place, you have to be enrolled in courses,” said Ezra Cipes, CEO of Summerhill Winery.

However, that seemed to be the hot topic issue that certain councillors seemed weary off, fearing that it simply becomes a large hotel for tourism if the college fails.

“Quite honestly, I can’t support a hotel and a vineyard,” said Given, admitting that she found the winery’s vision interesting, but still had concerns.

While some council members had their guard up, Mayor Colin Basran took a bit of a different approach.

He said that if this council had received a proposal in the 1980s to build an organic winery with a massive pyramid as the focal point, they would have thought the developer was crazy.

“This family has turned (Summerhill) into one of the most iconic places in our valley and has helped build an industry that we’ve become reliant on,” he said.

Basran cited the family’s track record as a reason to move forward with this proposal, saying that if it was a new applicant from outside of the Okanagan, he might feel differently.

“This is the first of it’s kind and I understand the trepidation, but if you’re open to the concept and still aren’t sold on the form and character, I ask that you vote in favour today,” the mayor said.

Part of the reason why Basran did ask council to vote in that way is that the proposal will still have to come back through council for final approval, which will come with a public hearing.

However, today’s approval simply pushes the application forward, along with the motion from council and the City staff report, to the ALC.

The final vote saw Basran, Given, Charlie Hodge, Loyal Wooldridge and Brad Sieben all give the green light.

Singh had initially voted yes and Donn said he was holding his vote until later, but once Stack said no, those two joined him in doing the same.

Despite the trio of opposed councillors, the project got enough support to go ahead to the ALC approval stage of the process.

Summerhill’s proposal calls for a four-storey building on top of their existing wine cellar, which would house the Culinary College for Humanity and the necessary accommodation for students and faculty.

The winery’s founder and owner, Stephen Cipes, has said that Kelowna is the perfect location for the school, which will be a model to the world of organic and local.

“We envision an international gathering place in this ideal setting, to develop sustainable food culture for the future of humanity,” he wrote in an executive summary for the project.

More information on the project is available in today’s council minutes, starting on page 25.

Support local journalism by clicking here to make a one-time contribution or by subscribing for a small monthly fee. We appreciate your consideration and any contribution you can provide.

Home Videos The WORLD of WINE – Wine News. Cheap wine, tasting notes and cooking with wine The World of Wine – May 2021 … END_OF_DOCUMENT_TOKEN_TO_BE_REPLACED

How to visit Napa Valley on a Budget. In this video Carson and I explain a few ways to enjoy Napa on the cheap. Tip and advice about how to visit Napa … END_OF_DOCUMENT_TOKEN_TO_BE_REPLACED

Home Videos Get To Know Argentina Wine | Wine Folly If you love Malbec, Argentina is your ultimate wine region. But that’s not … END_OF_DOCUMENT_TOKEN_TO_BE_REPLACED