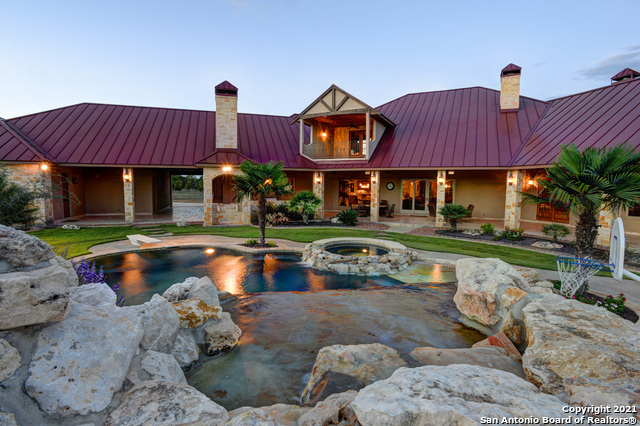 Luxury meets tranquility in Cordillera Ranch, an 8,700-acre master-planned community approximately 40 minutes northwest of San Antonio.
Spectacular Hill Country views and resort-style amenities are among the features that continue to attract homebuyers to developer David Hill’s exclusive gated community. The natural beauty of the rolling hills and the Guadalupe River, which flows along the northern edge of Cordillera Ranch, add to the picturesque package.
Cordillera Ranch residents have access to numerous amenities such as the Jack Nicklaus-designed golf course and memberships to seven resort-style clubs. There are clubs for those who like tennis, equestrian events, swimming, wine tasting, and more. The community even has clubs and camps for children. If guests are in town, they can stay in luxury boutique-style suites on the property, The Lodges at Cordillera Ranch. This community has so much to offer, one can easily see why it appeals to everyone from families with school-age children to empty nesters. Several celebrities, such as country music legend George Strait, call this community home.

Properties currently on the market in Cordillera Ranch include a 50-acre estate with a 6,550 square-foot house. It has a six-car garage, an equestrian center with living quarters, and a riding/roping arena with cattle pens. The list price for this four-bedroom, five-bathroom home is $4,900,000. Also for sale, a four-bedroom, five-bath, 5,905 square-foot home on 23 acres. The equestrian center on this property has six stalls with turnouts, a rotating tack wall, and an oversized tack room. The asking price is $2,999,000. A Tuscan-style home with two bedrooms and two baths is on the market for $1,189,000. It has 2,678 square feet, custom ceiling details with wood beam accents, a chef’s kitchen, and a large covered patio. For those who prefer to have a new custom home built, lots are still available. Sizes range from ¼ acre villa lots to ranch estate lots with more than 12 acres.
The neighborhoods offer both security and privacy. A guard monitors the gate off Highway 46, and there are cameras at all four entrances.

Despite the pandemic, home sales in the Hill Country have remained strong. Many luxury homebuyers from states such as California and Florida have opted to move to The Lone Star State because of its economy and less expensive home prices.
Barbara Baldwin-McNulty and her family moved to Texas from South Florida in 2004. They rented a home in Cordillera Ranch while their first house was under construction. She was impressed with the planned community and the top-rated schools in the Boerne Independent School District. Baldwin-McNulty is now living in her third home at the Cordillera Ranch. It’s an Italian-style, one-story across from the golf course with what she describes as breathtaking views. The vistas, privacy, and serenity are among the things residents say they love about Cordillera Ranch. “You have the peacefulness of the country without all the traffic and all the hustle and bustle,” she said. Baldwin-McNulty is CEO of Dean Baldwin Painting, a military and commercial aircraft painting company. The firm’s corporate office is in Bulverde.  She doesn’t mind the commute to her office or even the 15 to 20 minutes it takes to drive to the grocery store. Cordillera Ranch is less than 30 minutes from The Rim, The Shops at La Cantera in San Antonio, and numerous stores and restaurants in Boerne.

Communities like this one will continue to attract homebuyers as more people look to trade city congestion for wide-open spaces and a small-town atmosphere. Baldwin-McNulty said she doesn’t see a downside to living at Cordillera Ranch; she loves all it has to offer. “The people are what’s most valuable,” she said. “No matter who you meet, everybody is just so friendly and welcoming and helpful.”

Home Videos The WORLD of WINE – Wine News. Cheap wine, tasting notes and cooking with wine The World of Wine – May 2021 … END_OF_DOCUMENT_TOKEN_TO_BE_REPLACED

How to visit Napa Valley on a Budget. In this video Carson and I explain a few ways to enjoy Napa on the cheap. Tip and advice about how to visit Napa … END_OF_DOCUMENT_TOKEN_TO_BE_REPLACED

Home Videos Get To Know Argentina Wine | Wine Folly If you love Malbec, Argentina is your ultimate wine region. But that’s not … END_OF_DOCUMENT_TOKEN_TO_BE_REPLACED