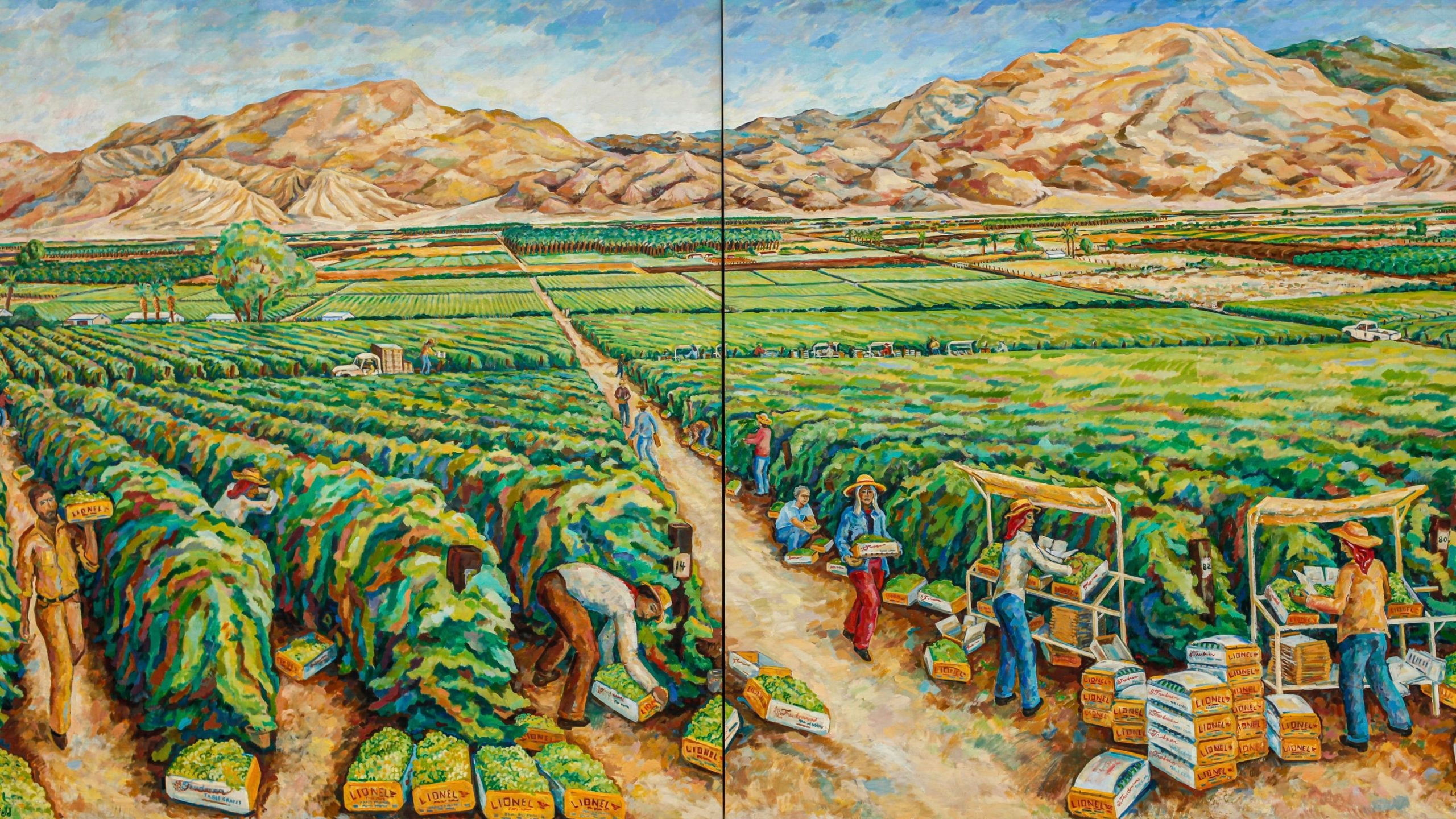 This month, a mural once familiar to thousands of farm workers in the Coachella Valley returns home. It depicts more than just the vineyards and grape pickers at David Freedman Company, where I once worked. It documents a path not taken for California agriculture, and its rural communities.

The mural—which is being donated to the city of Coachella by my old boss Billy Steinberg—was first commissioned for the company’s new packing plant and offices in the unincorporated town of Thermal, more than 40 years ago.

The 14-foot-by-7-foot work was created in 1979 by Laurence Neufeld, an art major whom Billy had met at Bard College in New York and who would go on to earn his degree from the University of Connecticut. Neufeld had studied the harvest paintings of Pieter Bruegel and Vincent van Gogh, and his mural was influenced by them. He did not want to paint the vineyards realistically—this would have limited his color palette—and instead used vivid expressionistic colors associated with French Fauvist painters, like Matisse and Derain.

Neufeld applied the canvas directly to the entry wall of the office. He designed it to fit the space. To the right of the mural was the window where one might ask about a check or apply for a leave of absence or schedule a paid vacation. To the left was the conference room with the big table where we met for grievances.

The most important thing about the mural was how it depicted farm workers. Unlike standard paintings purporting to show “happy” farm workers, Neufeld portrayed them realistically. They also were picking into boxes with the eagle of the United Farm Workers (UFW), Cesar Chavez’s union.

This reflects a history that should be better known. Billy’s father, Lionel Steinberg, started growing grapes in the Coachella Valley in the early 1950s. The David Freedman Company (named after his father’s step-father) became the largest grape-growing operation in the Coachella Valley, farming over 1,300 acres. In 1970, Lionel broke with other growers and signed the first Collective Bargaining Agreement with UFW.

Today, history books and school textbooks teach this momentous signing, which opened possibilities for farm workers to improve conditions in subsequent contracts.  By 1980, the union contract at Freedman—negotiated by UFW VP Gilbert Padilla and the Ranch Committee for the Union, and by Lionel and Billy for the company—provided the best wages and benefits for any farm workers in the world.

When the company was sold in 1988 — just as I earned my pension with my 10th year of service of 500 hours or more — Billy divided the canvas on which the mural was painted, and transferred it to his office in Santa Monica. There, perhaps inspired by his youth in the desert, he made a career as a composer and songwriter, including songs such as “True Colors” and “Like a Virgin.”

This winter he contacted me to let me know that he was moving offices, and would no longer have a wall big enough to house the mural. He said he wanted to donate it. Did I have any ideas about a location connected to the union or Coachella?

I suggested the new Coachella Library, and folks there were enthusiastic. One mentioned having parents who had worked at Freedman; another was a special fan of Billy’s songs. Billy also offered other historic items to the library, including photographs with Cesar Chavez, important archival documents, and two charcoal vineyard drawings, done by Neufeld as studies for the mural.

If only it were so easy to preserve and restore the way that workers were treated at Freedman.  Unlike most farm workers in the U.S., Freedman workers were paid double the minimum wage, with unemployment and disability insurance, family health insurance after 60 hours of work in a month, vision and dental plans, paid holidays, a modest pension plan, paid vacations for high seniority workers and most of all, respect. The company sat down with us to negotiate wages and conditions of work, and bargained in good faith to resolve problems.

So much has changed for the farm worker community in the Coachella Valley since the 1970-’88 contracts with the David Freedman Company. Our Congressman, Dr. Raul Ruiz, is from a farm worker family in Mecca. Upward mobility is a possibility.

But the mural is also a reminder of an alternative to today’s brutal California agribusiness system, which depends on the exploitation of a vulnerable population to work in the fields. The mural demonstrates that farm labor could be a choice for people that brings modest but adequate benefits—and pride in producing food for a hungry world.

“Sí, se puede,” we can build a more just system.

Doug Adair is a date farmer, retired grape picker, and UFW pensioner from his time at David Freedman Co. Travertine Vineyards. This essay is part of a project supported by the California Wellness Foundation exploring health equity in California’s rural communities.

Home Videos The WORLD of WINE – Wine News. Cheap wine, tasting notes and cooking with wine The World of Wine – May 2021 … END_OF_DOCUMENT_TOKEN_TO_BE_REPLACED

How to visit Napa Valley on a Budget. In this video Carson and I explain a few ways to enjoy Napa on the cheap. Tip and advice about how to visit Napa … END_OF_DOCUMENT_TOKEN_TO_BE_REPLACED

Home Videos Get To Know Argentina Wine | Wine Folly If you love Malbec, Argentina is your ultimate wine region. But that’s not … END_OF_DOCUMENT_TOKEN_TO_BE_REPLACED