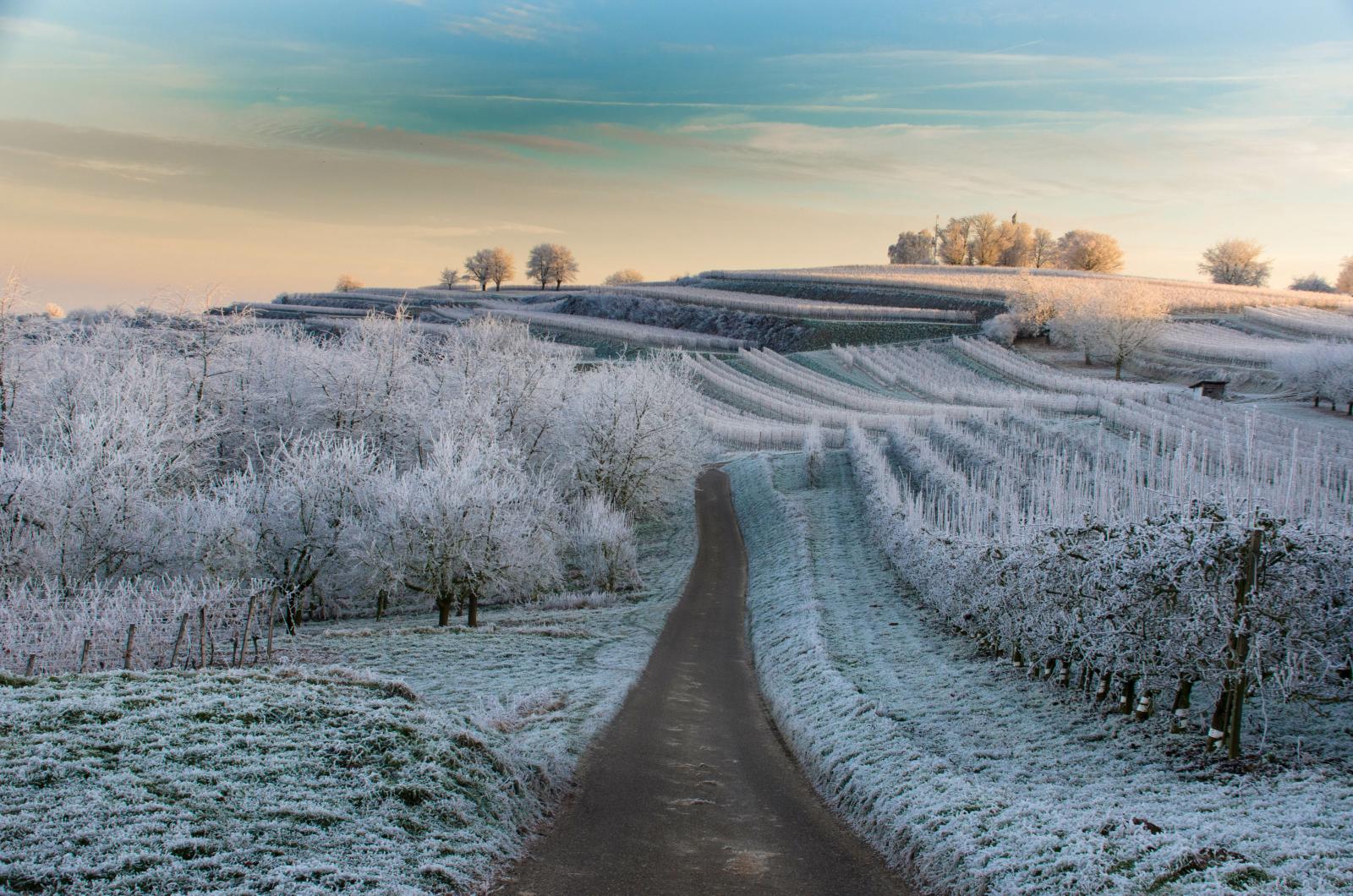 Exceptional warmth in late March across much Europe, including the UK, with temperatures reaching the mid to high 20s Celsius in parts of France, Low Countries and Germany, brought a big growth spurt of the first shoots of vines and in some major crops. In the UK, 24.5C was reached at Kew Gardens on March 30th

But last week, from Easter Monday, saw a plunge of cold arctic northerly winds across much of Europe, bringing temperatures tumbling and night time minima dropping to or below -5C across vineyards and orchards of France.

And just a week later, another wave of cold arctic air is currently sweeping south into Europe, with below average temperatures and additional mornings of frost likely to last until the end of the week, bringing the risk of further frost damage. Large amounts of snow also likely for the Alps, Balkans and mountain ranges of eastern Europe further north.

Another cold wave of arctic air spreading across large parts of Europe this week, shown by the below average temperatures below: 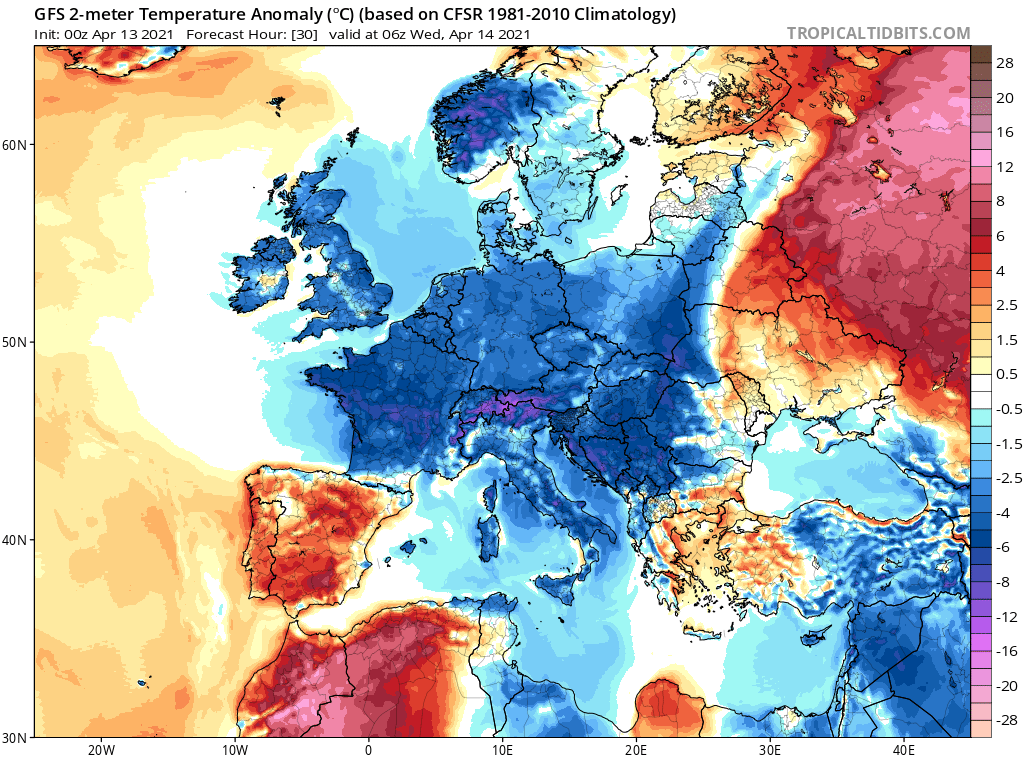 This has led to farmers using every method they can to save their crops. Deep frosts last week damaged the emerging buds on grapevines in famous French wine growing areas of Bordeaux, Burgundy, Languedoc and the Rhone Valley. Some vineyards affected by as much 90% damage, with temperatures dipping as low as -8C overnight during three nights of sub-zero temperatures. Wine growers resorted to lighting braziers, candles or even straw bales in an attempt to protect their crops. While many vineyards and orchards were also sprayed with water, ice forms on the wet shoots and buds as temperatures fall below freezing, make a protective glaze protecting them from frost.

It’s not just France, the UK’s vineyards have been taking measures, like the French, to protect their grapevines too. This is the Ridgeway Vineyard in the South Downs in Sussex yesterday morning.

Last year saw a warm and dry April in the UK, with temperatures reaching the low to mid-twenties earlier in the month. But a late frost struck between 11 and 15th May, which saw 25 vineyards suffer frost damage across 90-100% of the vines. Secondary growth can make up for early damage to vines, but yields will still be greatly reduced.

Vines and some fruit trees are particularly sensitive to frost damage during bud burst, which is when the buds of the vine or all perennial deciduous fruit trees start to emerge. This usually occurs in early spring (during March-April in the northern hemisphere), and can vary by region, grape or fruit variety and cultivation practice. It is accompanied by an increase in sap circulation and marks the end of winter dormancy.

Dormancy is a physiological state during which plants slow down or stop their growth, to minimize the risk of damage due to unfavourable climatic conditions. The reduction in the length of the day and the drop in night temperatures reinforce this process from September. The buds then become insensitive to the stimuli that usually trigger their growth (temperature and light). To become sensitive to environmental stimuli again, the plant must be exposed to sufficiently cool temperatures for a period of time. Bud development may resume whenever the temperature exceeds a certain threshold. In theory, cellular activity restarts at 5 ° C. But it takes several weeks of mild temperatures for the recovery to be visible.

Climate change acts on the dormancy of these plants in negative way. If it is too warm in the autumn and winter, cold requirements of dormancy may not be met and dormancy may be delayed or erratic. Conversely, mild temperatures during winter accelerate the emergence and the resumption of vegetative activity.

It is now accepted that the rise in temperatures due to climate change is partly responsible for the earlier break of winter dormancy and subsequent early vegetative growth of vines, fruit trees and some crops that can be sensitive to spring frosts.

With climate change, polar areas are warming twice as fast as temperate and tropical areas. However, the temperature difference is at the origin of the vigour of the belt of very strong winds which fluctuates around the arctic zone at an altitude of 10, 000 m – what we know as the “jet stream”. Climate change is causing this temperature difference between the poles and the temperate zones to be smaller and the jet stream becomes more meandering, which allows occasional cold waves to descend further south during spring. When the troughs in these meanders descend far south, they allow cold arctic air to enter temperate areas, such as Europe on the western side of the troughs. But on the flip side of the meander, on the eastern side of the troughs moving south, it can also bring exceptional warmth northwards too, as we saw in late March across Europe. 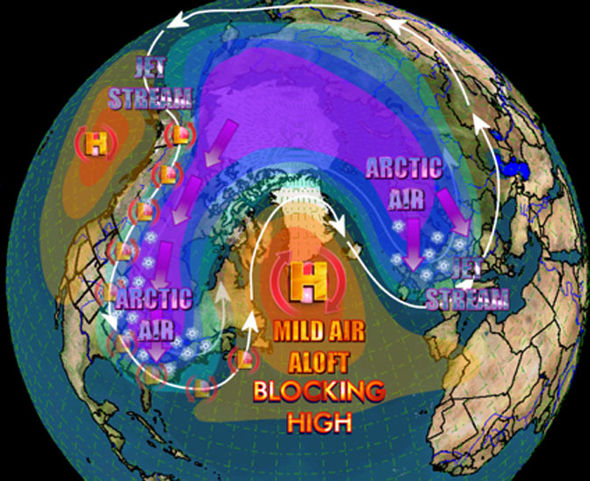 So climate change will likely mean more of these extreme fluctuations in temperature, swinging from summer-like warmth in early spring to winter-like cold a few weeks later. This having consequences on nature, such as damaging early tender plant growth following winter dormancy or affecting other areas of nature too.

Home Videos The WORLD of WINE – Wine News. Cheap wine, tasting notes and cooking with wine The World of Wine – May 2021 … END_OF_DOCUMENT_TOKEN_TO_BE_REPLACED

How to visit Napa Valley on a Budget. In this video Carson and I explain a few ways to enjoy Napa on the cheap. Tip and advice about how to visit Napa … END_OF_DOCUMENT_TOKEN_TO_BE_REPLACED

Home Videos Get To Know Argentina Wine | Wine Folly If you love Malbec, Argentina is your ultimate wine region. But that’s not … END_OF_DOCUMENT_TOKEN_TO_BE_REPLACED