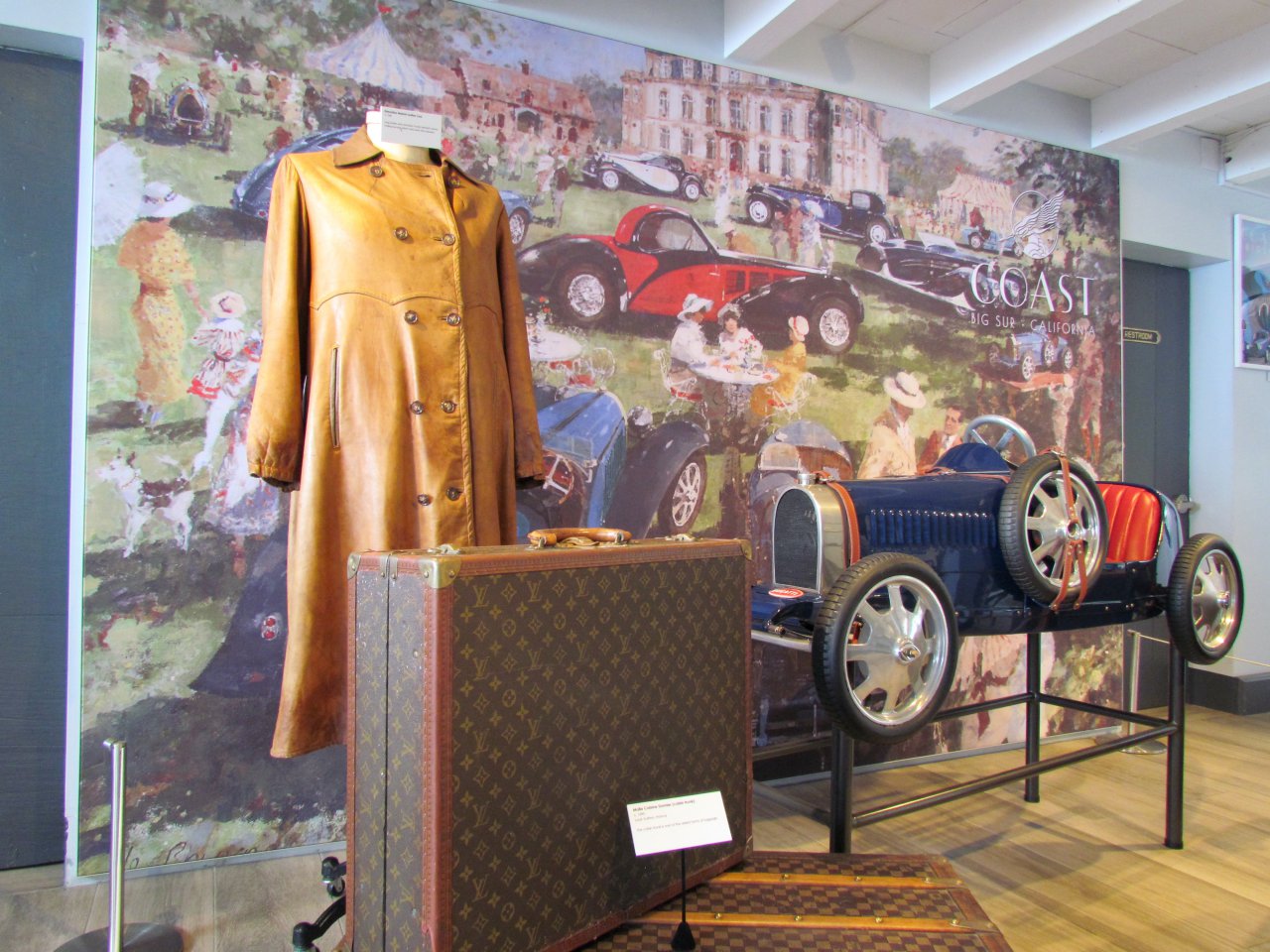 If you’re looking for a place to escape Monterey Car Week for a few hours early Saturday afternoon, consider driving down to Big Sur for a wine tasting at Coast, an art gallery and cafe with a pleasantly surprising collector car connection.

Walk through the main gallery (originally a huge round water tank) and before you exit into the courtyard that provides access to the boutique and the cafe, you’ll find yourself in a room dedicated to collector cars.

Why? Simple.  Since 2016, Coast has been owned — and extensively renovated — by Peter and Merle Mullin, a couple well known in the classic car community for the Mullin Automotive Museum and one of the world’s finest collections of exceptional 20th Century French cars and objects of Art Deco design.

Peter Mullin also is past chairman of the Petersen Automotive Museum and led the effort to remodel the Los Angeles facility inside and out. Merle Mullin is an artist, and she helps stage a driving rally for women in support of various charities. On August 13, she’ll be a panelist at the Pebble Beach Concours Forum’s session on “Women Who Love Their Cars.”

The Mullins have a winery in Big Sur, are part-time residents and were customers of the Coast before purchasing the property. They brought in chef and cookbook author Nick Balla from San Francisco, whose food is served not only at the cafe but at various catered events; Coast has become a favored wedding venue, which is interesting when you consider the main building’s round shape comes from a pair of 32-foot old-growth-redwood water tanks originally used at a Naval hospital.

Big Sur was so-named due to early Spanish explorers who found it so difficult to travel along a particularly rugged section of the central California coast that they merely labeled the untraversed area el pais grande del sur, the big country to the south, and found an easier route inland. The area’s name would be contracted into Big Sur.

Instead of a 3-day wagon trip from the Monterey Peninsula, the establishment of California Highway 1 made the area more accessible and particularly attractive to artists and writers. And with scenery that includes stunning shoreline vistas and more than half a dozen state parks, Big Sur became a destination for tourists as well, typically 5 million or more each year.

In 1958, the Coast Gallery was founded and became so popular with customers that local artists nicknamed it “The Bank.”

But the boom didn’t last very long and The Bank sort of went bust. The property was purchased in 1971 by a candlemaker from Oregon. Within six months, the building was devastated by a major storm and the flooding that resulted.

Fortunately for the candlemaker, two huge water tanks were no longer in use at a Naval hospital, and they were moved and converted into a new Coast gallery space. An upstairs dining deck opened in 1994 and the place became known as the Coast Cafe.

Again, time took its toll and the property became run down. After the  Mullins bought it, they spent many months restoring what now is known simply as COAST.

Like Chef Nick, much of the staff was recruited from top San Francisco restaurants. But the cafe menu is designed for a variety of tastes, including children’s, said general manager Tyler Rue, who added that COAST sees itself as being “like a national park, everybody wants to come.”

And thus, it tries to appeal to a wide range of visitors, from the Mom and Pop from Bakersfield out for a Sunday drive to the well-traveled tourists coming down from Monterey Bay as well as leaders in business and technology.

“We have something for everyone,” Rue said, “from pizza and ice cream for the kids to fine jewelry and art.”

The wine tasting August 14 runs from noon to 3 p.m. and features wines from the Mullin vineyards.

If you can’t make it this weekend but are looking for an excuse to visit, COAST also participates in the Big Sur Wine and Food Festival, scheduled this year for November 4-6. The Festival raises money for local nonprofits in health, safety, education and art.

Home Videos The WORLD of WINE – Wine News. Cheap wine, tasting notes and cooking with wine The World of Wine – May 2021 … END_OF_DOCUMENT_TOKEN_TO_BE_REPLACED

How to visit Napa Valley on a Budget. In this video Carson and I explain a few ways to enjoy Napa on the cheap. Tip and advice about how to visit Napa … END_OF_DOCUMENT_TOKEN_TO_BE_REPLACED

Home Videos Get To Know Argentina Wine | Wine Folly If you love Malbec, Argentina is your ultimate wine region. But that’s not … END_OF_DOCUMENT_TOKEN_TO_BE_REPLACED