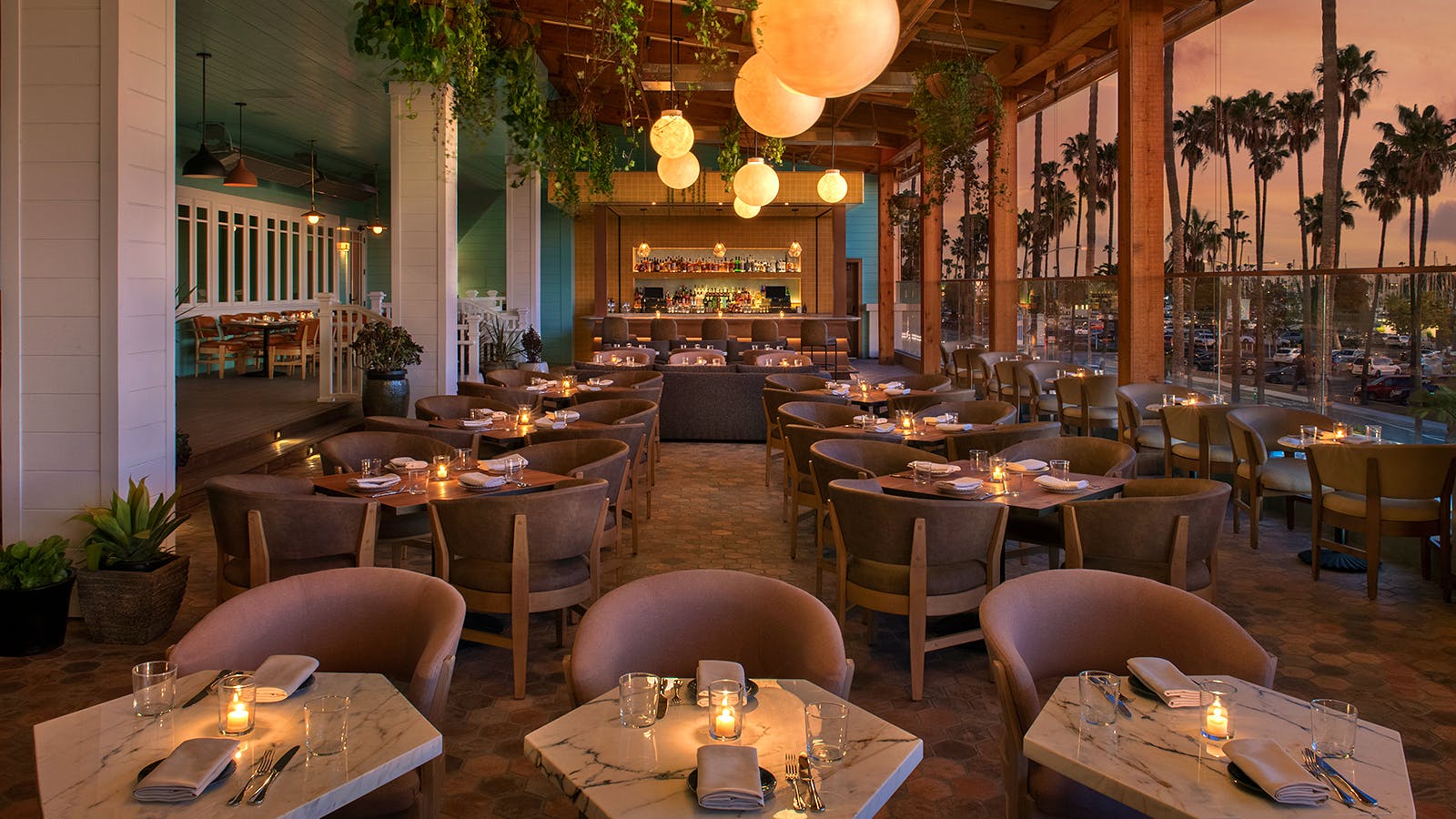 “We are so excited to collaborate on our first brand-new restaurant concept,” Mina told Wine Spectator via email. “Our goal is to bring a warm and comforting place that will feel like an extension of the living room you always wanted.”

Bungalow Kitchen is housed in a 10,000-square-foot space by design group Studio Collective, where American Craftsman architecture mixes with industrial and rock ‘n’ roll–influenced elements. It includes a main dining area called the Sun Room, as well as a Game Room with a pool table. “It’s the most innovative restaurant project I have ever been a part of,” Bolthouse said via email.

Mina Group’s corporate lead sommelier, Jeremy Shanker, oversees the wine program of about 100 labels. “[The] wine list aims to match the restaurant’s fun and lively vibe with a curated selection of up-and-coming wines,” Shanker said via email, noting that this list is smaller and more eclectic compared to the “traditional” or “regionally focused” lists at other Mina restaurants. There’s a substantial selection of Champagne, Prosecco and West Coast bubbly, plus white wines from Austria, Germany and France. The reds are heavy on California Merlot and Pinot Noir, with additional bottles from Burgundy, Rhône and Italy. There are more than 1,000 bottles in the current inventory, but Shanker expects to expand.

“We’re the type of place where you feel the exclusivity of a secret hideaway with the comfort of lounging at your best friends’ home,” Bolthouse said. “You’ll want to eat too much and stay all night, and we welcome it.”

The restaurant is currently only open for outdoor dining on its patio, but will invite guests inside once local COVID restrictions allow. A sister location of the same name will be opening farther north in Tiburon, Calif., this spring with Mario Beabraut as executive chef.—Collin Dreizen

Upscale Greek chain Estiatorio Milos adds a seventh location to its international portfolio this month in Las Vegas’ Venetian Resort. Set to open March 15 from chef-owner Costas Spiliadis, the newest outpost offers Milos mainstays such as a calamari with lemon and parsley, jumbo prawns and a variety of whole-grilled fish. While there’s a signature seafood focus, other regional staples like Greek salad and grilled lamb chops are also on the menu.

Spiliadis’ son, George Spiliadis, serves as wine director. There’s a substantial selection of more than 200 labels on the opening list, which George has plans to grow. “The general vision of our wine program is to work as much as possible with wine producers from around the world who are making wine that reflects the terroir from which they come from,” George said. “We also strongly believe that Greek wines are misrepresented, misunderstood or simply not yet discovered.”

To encourage guest discoveries, more than 60 selections hail from Greece, Lebanon or Cyprus, and the by-the-glass program of 16 wines is almost entirely Greek. The wines are mostly produced from the country’s indigenous grapes like Assyrtiko, Malagousia and Xinomavro, with some Greek expressions of international varieties as well. Additionally, half-bottle and large-format selections are available from producers including Domaine Gerovassiliou and Domaine Katsaros. Rounding out those regions on the bottle list are picks from France, Italy and the United States.

This isn’t the brand’s first time in Vegas; Milos was located in the Cosmopolitan resort for a decade before closing in fall of 2020 with plans to move properties.—Julie Harans

The Roman neighborhood of Testaccio serves as inspiration for the new Chicago restaurant with the same name. (Rachel Bires)

Restaurateur Aldo Zaninotto, owner of Chicago Award of Excellence winner Osteria Langhe, has a new Italian spot in the city’s Logan Square neighborhood. Testaccio officially opened earlier this month following a brief soft opening late last summer, before it was forced to close due to COVID shutdowns. The restaurant is named after, and inspired by, Rome’s Testaccio neighborhood.

“I had the idea to do a restaurant that would bring the feel of Testaccio to Chicago since 2019 … When the opportunity to get the space happened in 2020, we jumped right on it,” Zaninotto told Wine Spectator via email. “[The Testaccio neighborhood] has so much to offer. So much history, layers and traditions told through the food and wine.”

Overseen by Zaninotto, Testaccio’s wine list includes more than 65 labels, mostly from southern Italian regions like Sicily, Abruzzo and Campania. While there are wines from other Italian regions like Tuscany and Sardinia, there are none from northwestern Italy, a marked difference from Osteria Langhe’s Piedmont-heavy list. Wines from Greece, France, Turkey and Lebanon are also featured. “[These regions] represent the Mediterranean influence on Roman culture and cooking,” Zaninotto said. “I selected wines that are diverse in style … that complement our cuisine while still speaking to tradition.” In total, there are about 1,000 bottles in Testaccio’s inventory.

Roman fare is at the core of chef Jacob Solomon’s menu, including cacio e pepe, carbonara, porchetta and artichokes with lemon aioli. Most dishes are cooked in the restaurant’s wood-burning oven, a traditional tool for Roman cuisine, according to Zaninotto. He describes Testaccio’s atmosphere as “bright, lively and airy.” Reflecting Rome’s juxtaposition of old and new, the space combines design elements like vintage furniture, colorful porcelains and local modern art.

Testaccio is currently only open for indoor dining at half capacity, but guests will have access to the restaurant’s sizable patio later this year. And this spring, Zaninotto will open the Parisian-inspired Soif Wine Lounge in the basement level of Testaccio, serving small bites and grower Champagnes. The restaurateur is also debuting a food truck this summer called Pizzica, featuring Italian street food and wines on tap.—C.D.

Chef Danny Grant and What If Syndicate, the team behind two Restaurant Award–winning locations of Maple & Ash, opened Monarch in Dallas on March 10. Located on the 49th floor of the National, a multipurpose tower with residences, the refined Italian restaurant is the first Texas project for Grant. “I am incredibly proud of our talented team. They have brought their best design and creativity in making Monarch a reality,” Grant said in a statement shared with Wine Spectator.

The restaurant takes advantage of its sky-high space, welcoming guests through a two-story conservatory with a spiral staircase. But in the dining room, the star is the open kitchen and its wood-fired hearth, used for dishes like giant bucatini, oxtail mezzaluna and Wagyu tomahawk.

Alongside an extensive spirits selection, the wine list offers approximately 250 selections with more than 30 available by the glass. Managed by wine director Jason Caballero, the list is mostly classic, with a core of Italian red wines. There are substantial showings from Piedmont and Tuscany, while French Rhône and Bordeaux blends and Napa Cabernet Sauvignons help to round out the list. There is also a generous offering of lesser-known white wines, plus Old and New World Chardonnay. “It should be approachable and overall fun,” Caballero said of his intention for the program.

The team also has a second opening in the National slated for late March, set to occupy the 50th floor. Called Kessaku, the sushi lounge will have fresh seafood flown in daily, with a beverage focus on sake and Japanese whisky.—Taylor McBride

Home Videos The WORLD of WINE – Wine News. Cheap wine, tasting notes and cooking with wine The World of Wine – May 2021 … END_OF_DOCUMENT_TOKEN_TO_BE_REPLACED

How to visit Napa Valley on a Budget. In this video Carson and I explain a few ways to enjoy Napa on the cheap. Tip and advice about how to visit Napa … END_OF_DOCUMENT_TOKEN_TO_BE_REPLACED

Home Videos Get To Know Argentina Wine | Wine Folly If you love Malbec, Argentina is your ultimate wine region. But that’s not … END_OF_DOCUMENT_TOKEN_TO_BE_REPLACED