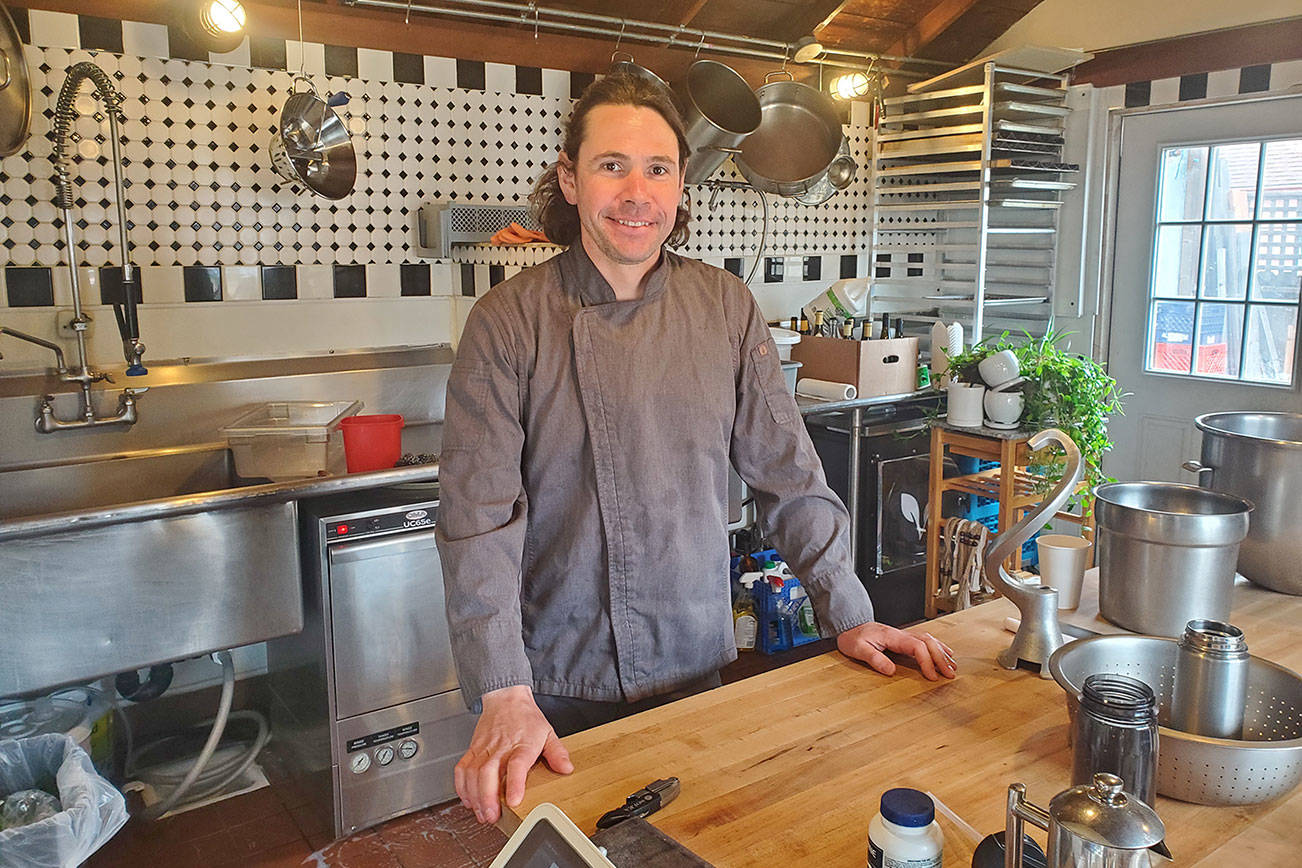 Earthen, Chris Koerber’s intimate little restaurant at the corner of the IGA parking lot, is undergoing something of an evolution in its approach to dining these days.

Like every other such establishment, Earthen was impacted by the pandemic and had to adapt to offering a take-out menu to survive. Now, with vaccinations promising eventual relief from the lockdown — and summer just around the corner — Koerber is rethinking what a re-emergent Earthen will look like.

For now, at least, Koerber will not be offering the weekend brunches that were so popular in the past.

“Yeah, a lot of people are upset about that,” he said with a rueful smile — but at present, he lacks the staff to run both a brunch operation as well as a renewed evening dining menu. His current plan is to offer a “comfortable” version of fine dining, based upon a prix fixe menu as well as bistro-style takeout, and what he calls “Chef’s Table” — a personalized menu tailored to the preferences and dietary needs of specific customers or small groups.

“Fine dining” conjures an image of men in suits and ties and women in stylish cocktail dresses, which is not exactly very, well, Vashon. That’s not what Koerber is thinking for his Chef’s Table, but he does want to give customers an experience that is more elegant and formal than casual come-as-you-are dining.

“I want to make people feel comfortable,” he said, “but also make the evening feel special and more ephemeral — one that transports people into a state of grace.”

Koerber became very prosaic when he talked about this. Such an evening, he said, should be about “being grounded by the food” but should also be an experience that “interweaves each dish and wine pairing with wistful memories – of childhood and travels, the rolling of the waves, the dew underfoot and the smell of ripe tomatoes on the vine.” Ultimately, he would like people to depart feeling “elevated, with a wistful smile playing across their lips”.

Koeber grew up in New Hampshire in what he describes as a “biodynamic farming community,” so good food and healthy ingredients were part of his childhood. He began cooking at the age of 17, working at an environmental education center run by Boston University, which featured buffet meals shared family-style, with lots of fresh produce.

After taking courses in various things (notably political science), Koerber moved across the country, eventually ending up in Seattle in 2011, where he worked in a bakery. On his way to the Pacific Northwest, he worked for a couple of years at Triple Creek Ranch, an upscale Relais and Châteaux property in the Bitterroot Mountains of Montana, where he learned a lot and refined his culinary technique.

He first came to Vashon five years ago. He worked for a few years at Sea Breeze Farm and cooking at the farm’s La Boucherie restaurant — the predecessor to Earthen in the same building. Until recently, Koerber commuted from Bremerton before finally moving to the island last fall.

Earthen’s switch from an à la carte menu to a prix fixe reflects, in part, the simple logistical challenges that Koerber faces operating a restaurant in a small space: it’s much easier to have the predictability that goes with a set menu instead of having to scurry around meeting a variable number of orders for numerous different dishes. But it’s also about creativity, and the ability to focus on a limited number of well-crafted items.

“Cooking for me is like a puzzle,” Koerber said. “Herbs, spices and other elements complementing the characteristics of the main ingredient. I love the creativity of it.”

Earthen is well known for its bakery products, and Koerber has a long history with baking.

“Cooking and baking are different ways of thinking about things,” he said. “They’re really different thought processes. With cooking, you have a lot more leeway to adjust things while you’re making a dish. But with baking, it’s rather more regimented — you put it in the oven, and hope for the best.”

Earthen’s “Chef’s Table” option allows guests to tell Koerber what they like, and for him to then design a menu accordingly; it’s an option he offers to small groups, arranged ahead of time.

Right now Earthen’s operation is largely built around what Koerber calls a “bistro take-out menu”, offered from Wednesday to Saturday from 4 to 7 pm, as well as small groups in the restaurant for pre-arranged Chef’s Table dining. With improving seasonal weather he expects to have the deck open soon for people to sit and eat their take-out, and he hopes to be able to serve more people in the restaurant itself when pandemic restrictions loosen up.

“We might do brunch again,” he said hopefully, “but that will require me finding someone else to manage it.”

Koerber himself likes to eat a lot of things, but has a particular love of seafood, though he admits he has a hard time cooking for himself.

“I’m not used to cooking in small quantities,” he joked. When not cooking, he spends time outside with his girlfriend and his dog, a young pit/lab mix. He loves hiking, and kayaking in local waters.

When asked why he named his restaurant “Earthen”, he laughed.

“It doesn’t really mean anything as a word,” he said. “But I guess for me it has a spiritual aspect, along with bringing to mind the good dirt in which things grow.”

Earthen’s cuisine is best described as “French-inspired Northwest,” with fresh and locally sourced ingredients. The restaurant’s current offerings, and samples of Chef’s Table menus, can be found at their website, earthenbistro.com. The restaurant is at 17635 100th Ave SW, at the northeast corner of the IGA parking lot. Call the restaurant at 360-536-8583; email earthen@earthenbistro.com. Find out more on Instagram @earthen.bistro.

Home Videos The WORLD of WINE – Wine News. Cheap wine, tasting notes and cooking with wine The World of Wine – May 2021 … END_OF_DOCUMENT_TOKEN_TO_BE_REPLACED

How to visit Napa Valley on a Budget. In this video Carson and I explain a few ways to enjoy Napa on the cheap. Tip and advice about how to visit Napa … END_OF_DOCUMENT_TOKEN_TO_BE_REPLACED

Home Videos Get To Know Argentina Wine | Wine Folly If you love Malbec, Argentina is your ultimate wine region. But that’s not … END_OF_DOCUMENT_TOKEN_TO_BE_REPLACED