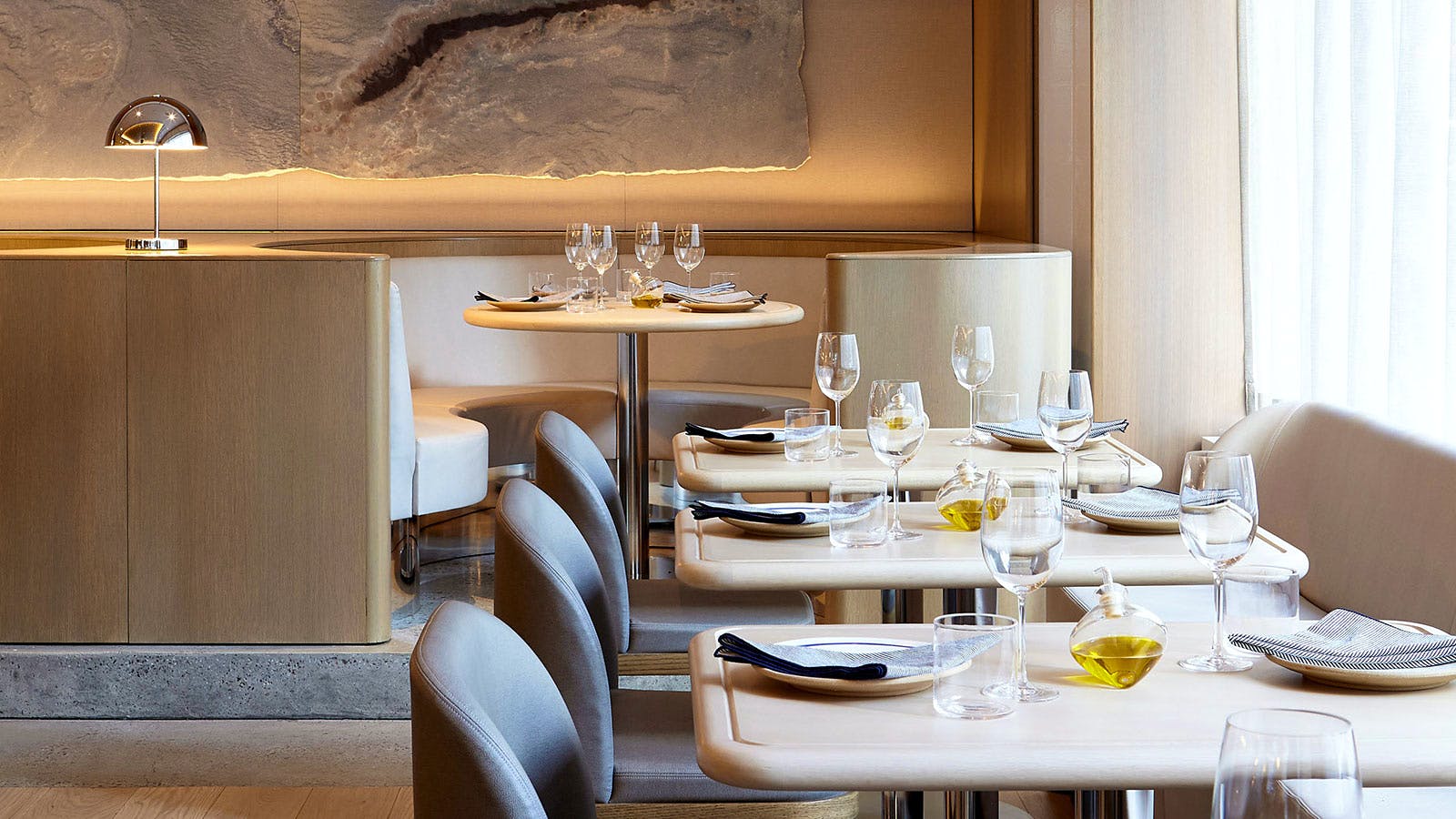 “This restaurant is such a direct expression of my heritage and passion, as seen through the lenses of cuisine and travel,” Fraser told Wine Spectator.

Leading the wine program is the group’s beverage director, Amy Racine, who also oversees 701West’s 650-selection list. Iris features about 180 labels highlighting regions along the Aegean Sea, with Greek and Turkish bottles making up about half the selections. There is a diverse selection of sparkling wines as well, plus picks from Napa, Piedmont, Burgundy, the Rhône Valley and beyond. “It was a privilege—and very fun—to explore these new varietals, to introduce our guests to something new,” Racine said. “We really wanted a ‘If you like Sancerre, you’ll love this from Turkey’ conversation.”

Executive chef Rob Lawson serves up traditional mezze like tzatziki and whipped feta, as well as seafood options like swordfish tartare and Long Island oysters. The menu also includes Turkish flatbreads and shareable plates, along with heartier mains like braised snapper and marinated lamb with scallion cakes. Pastry chef Adriana Adorno Davila’s selection of traditional desserts are offered on a tableside cart. “I hope Iris and our focus on Aegean cuisine provides some regional specificity to what people consider Mediterranean cuisine,” Fraser said.

Planning for Iris began two years ago, and the restaurant’s opening date was delayed by about six months due to the COVID-19 pandemic. This is the second time Fraser has opened a restaurant during the pandemic, following his revival of North Fork Table & Inn on Long Island. “We’re proud to be part of that push to bring Midtown back to life and get New York rolling again,” Fraser said. “I also love being able to put my team back to work.”—Collin Dreizen

Manhattan has a new pop-up eatery from Tom Colicchio, the celebrity-chef owner behind Best of Award of Excellence winners Craft, Temple Court and Craft Los Angeles. Vallata opened April 28 in the location that formerly housed Colicchio’s Craftbar, which closed in 2017 and has since been used as the private-dining space for Craft (the two venues connect through an underground hallway).

As Colicchio’s first restaurant serving Italian cuisine, Valletta will feature dishes like chickpea salad with squid, shrimp and octopus, ricotta cavatelli with braised oxtail and lamb sausage with broccoli rabe and Calabrian chile. The chef developed the menu along with Bryan Hunt, the director of culinary operations for Colicchio’s Crafted Hospitality group.

According to Natalie Grindstaff, Crafted Hospitality’s director of beverage programs, the wine list is a love letter to Italy’s growing regions, with 16 selections that are all also available by the glass. The almost exclusively Italian list spans the entire country, from Sicily to Alto Adige. Guests can also order from the Best of Award of Excellence–winning wine list at the neighboring Craft, which comprises 850 selections with strengths in France, Burgundy, California and Italy.

Though there is no planned end-date in sight, the pop-up is set to run until the end of summer and possibly through the latter half of the year. Reservations are available for dinner Wednesday through Sunday.—Taylor McBride

Danny Meyer says New York’s mayor called on him for the new leadership role, and he was happy to get involved. (Shannon Sturgis)

“[NYCEDC] has an extraordinary executive team that handles the day-to-day work,” Meyer told Wine Spectator. “My role is to help and show that the city and business community are in sync as we reopen New York.”

As the restaurateur behind the prolific Union Square Hospitality Group, including historic Restaurant Award winners like Union Square Cafe and Gramercy Tavern, Meyer may seem like an untraditional choice. But acting NYCEDC president Rachel Loeb explains that Meyer’s values, drive and impact on the city make him the right fit for the position. He’s also the founder and chairman of Shake Shack, which he grew from a single hot-dog cart to a massively successful, global burger chain.

“Danny has been a visionary, leading the way for not only restaurants but how other hospitality and service businesses can be well-run through innovative policies that put people first,” Loeb said in a press-release statement. “Over the years, he has seen opportunity in New York neighborhoods helping to anchor them for the future, just as EDC has done and continues to do during this recovery period.” Mayor de Blasio echoed the sentiment in his own statement. “Danny Meyer has the experience, vision and creativity we need to drive our recovery forward.”

Meyer was already on a committee for the local tourism board that centered on the city’s reopening when the mayor asked him to take on this role. While he sees a long path toward New York’s full recovery that will rely in part on Broadway’s reopening, Meyer is determined to further the board’s mission and consequently help the restaurant industry. “Our industry needs so many people. And so many New Yorkers need jobs right now.”—Julie Harans

After a COVID-related closure that was supposed to be temporary, Award of Excellence winner Benedetto in Cambridge, Mass., will not reopen. Co-owners Mike Pagliarini and Pam Ralston shared the news on the restaurant’s website on April 20. According to the statement, they’d been preparing to reopen until the previous week, when the encompassing Charles Hotel informed the team that the lease was being terminated.

“This news came as a complete surprise,” the statement read in part. “As owners, we are still processing this loss of the business that for the past five years has been a tremendous source of pride and joy.”

Located on the Harvard University campus, the restaurant served a pasta-centric Italian menu and a wine program of 300 selections. Wine director Robert Taylor oversaw the list, which championed Italian labels and particularly excelled in Piedmont and Tuscany. Though they didn’t provide further details upon request, the owners’ statement did hint at coming plans. “All we can do now is look forward, and we are excited by the opportunities the future may hold.” Benedetto’s nearby sibling restaurant, Giulia, remains open.—J.H.

Home Videos The WORLD of WINE – Wine News. Cheap wine, tasting notes and cooking with wine The World of Wine – May 2021 … END_OF_DOCUMENT_TOKEN_TO_BE_REPLACED

How to visit Napa Valley on a Budget. In this video Carson and I explain a few ways to enjoy Napa on the cheap. Tip and advice about how to visit Napa … END_OF_DOCUMENT_TOKEN_TO_BE_REPLACED

Home Videos Get To Know Argentina Wine | Wine Folly If you love Malbec, Argentina is your ultimate wine region. But that’s not … END_OF_DOCUMENT_TOKEN_TO_BE_REPLACED