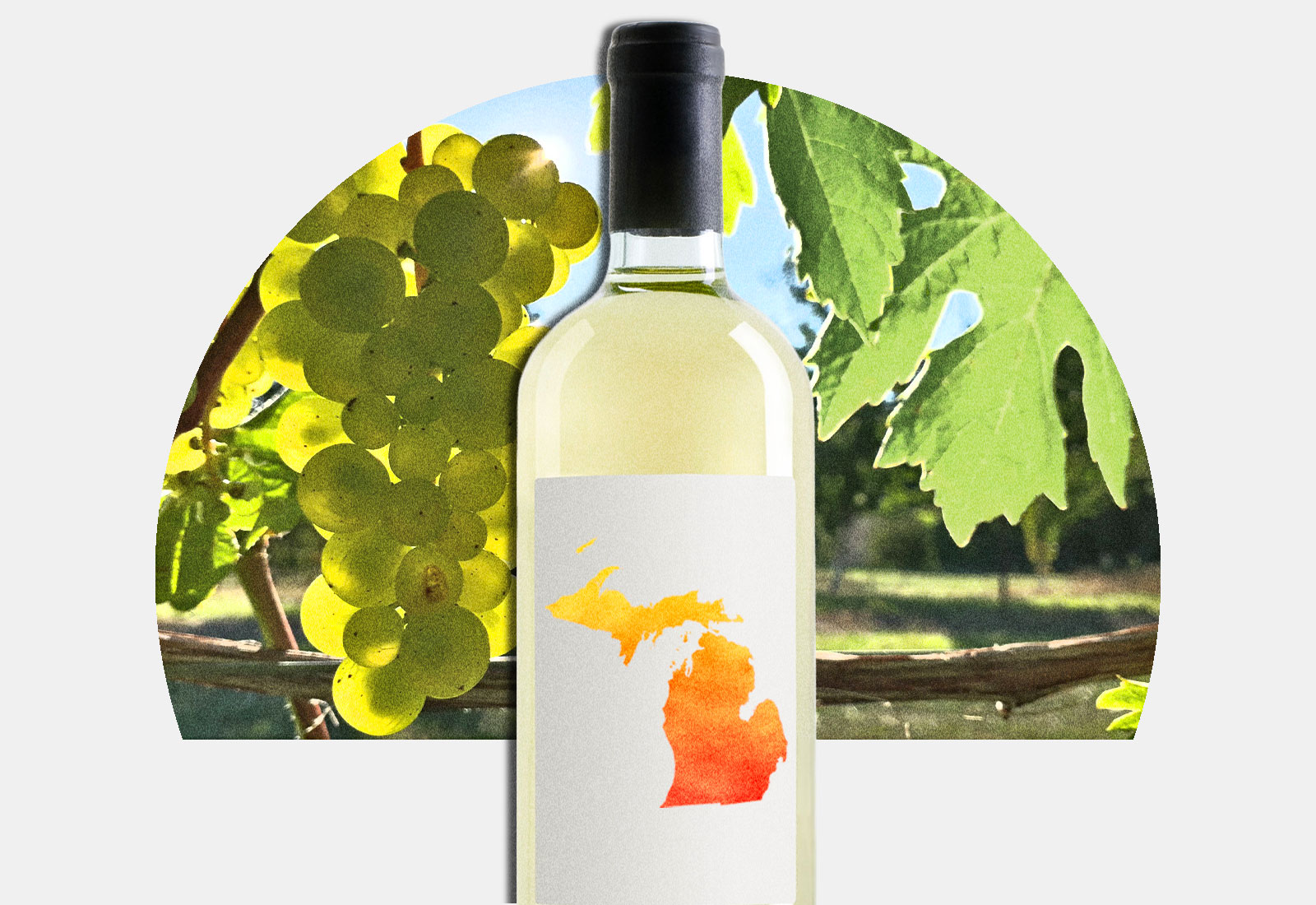 “Warm growing season throughout the year is allowing us to make some really classic varietals, like cabernet sauvignon,” said Nancie Oxley, the vice president of St. Julian’s and a winegrower for several decades, gesturing to the rows of grape vines just starting to bud. “I don’t know if we would’ve been able to do that 20 years ago.” When St. Julian first opened in 1921, the company grew mostly native varietals like Niagara and Concord, because the cold climate and extreme winters in Michigan were too harsh for European grapes. Now, St. Julian grows over 50 different varietals, including a number originating from Europe.

The wine industry in Michigan is valued at $5.4 billion dollars and directly creates 28,000 jobs — and it’s getting even bigger, in part due to climate change. Average temperatures in the state have increased by more than 2 degrees Fahrenheit over the last 100 years. The onset of spring has shifted forward, extending the growing season for wine grapes by an entire month. But even as Michigan wine producers stand to benefit from rising temperatures, compared to other wine-producing regions, they’ll also face new climate challenges.

“What you get with [climate] warming is the possibility of more varieties, some that wouldn’t fit in the growing season now,” Armen Kemanian, an agricultural scientist at Pennsylvania State University, told Grist. “That applies in general for grapes, but for other crops as well.” Rice production, for example, has slowly been moving more north in the United States. In a few decades, places like Iowa and Illinois may be able to “double crop,” meaning when farmers can plant and harvest two crops consecutively in the same field thanks to a longer growing season. So far, Kemanian said, plant growers in the Midwest and Northeast have mostly experienced the positives that are related to a warming climate.

The number of vineyards in Michigan has almost tripled in the last decade, jumping from 90 in 2012 to 257 in 2020, according to the U.S. Department of Agriculture, or USDA. Currently, 3,375 acres of Michigan are covered with wine grapes. By 2024, the Michigan Craft Beverage Council estimates the state could have some 10,000 acres in wine grape cultivation.

Scientists say that across the northern U.S. — in states like Wyoming and Montana — more land will increasingly become suitable for wine-growing as temperatures rise. But even within this region, Michigan will likely see the biggest boost thanks to its unique microclimate along Lake Michigan. During summer months, the Great Lake absorbs heat, gradually releasing it during the fall and winter. This extends the state’s agricultural growing season. It also means that while winters in the farming regions bordering Lake Michigan are cold, they’re not nearly as cold as other parts of the state.

The USDA divides the country up into what are known as “plant hardiness zones,” designations that help gardeners and farmers know which plants will thrive best in different areas based on average annual minimum winter temperatures. Since 1990, hardiness zones in the U.S. have shifted northward 13 miles per decade, changing areas’ designations by roughly half a zone, with minimum temperatures around 5 degrees F warmer. Michigan’s current wine-growing regions shifted from being a Zone 5 plant region in 1990 to a Zone 6 in 2012, the last time the USDA updated its maps. It means the state is slowly shifting from a cool-climate region into more of a warm-climate one similar to southern France, and capable of growing the same grapes, like cabernet sauvignon. Eventually, grapes like petit verdot and tempranillo that only grow in warm places like Texas could soon be successful across Michigan, Maria Smith, a viticulture specialist at Ohio State University, told Eater.

Coenraad Stassen has grown wine grapes for Brys Estate Vineyard and Winery in Traverse City in northern Michigan for the last 15 years. Recently, he’s started experimenting with a few new varietals, including tempranillo, although he says there hasn’t been a lot of success with growing the grape in Michigan yet. “It’s not massive plantings. Just a barrel or two barrels to see how climate change is affecting varietals that we haven’t done before,” he said. Stassen previously grew wine grapes in South Africa for eight years, but moved to Michigan in 2003 because of the potential he saw in the state’s wine industry. He thinks the benefits of a warming climate on grapes in the state outweigh the negatives, but emphasized the changes will be very slow. Like in any industry when there are shifts, he said, there’s a learning curve. “We as growers and winemakers have to adapt. That’s going to be the key.”

Also in Traverse City is viticulture educator Esmaeil Nasrollahiazar, who works for Michigan State University. Winemaking is a family tradition for him, and he used to grow grapes professionally in Italy. He moved to the U.S. in 2019 to help Michigan grape growers adapt to the effects of climate change. “I’m really optimistic that our state will be one of the leading grape wine producers in the U.S.,” he said.

It’s not just Michigan growers that are enthusiastic about the state’s wine potential as the climate warms up. Last year, the magazine Wine Enthusiast highly ranked a record number of Michigan wines. Of the 65 wines that made the list, most scored 87 to 91 out of a total possible 100, placing them on par with wines from Oregon and Spain. “Michigan really has great potential,” Aaron Mandel, an international wine judge and director of education for the American Wine Society, told Grist. “It’s one of the states I’ve always been excited about their potential for vinifera wines,” or wines made from European grapes.

There are five federally recognized viticulture areas in Michigan, clustered along the top of the state’s mitten shape and the southern end of Lake Michigan. With a warming climate, more areas are becoming available for wine grape production. Right now, red varieties are mostly only planted along the southern end of Lake Michigan. But by 2050, scientists estimate that range could extend to include more than half of the Lower Peninsula. Even more land will be good for growing white varieties. The quality of wine will improve too — with warmer temperatures, grapes produce a naturally sweeter wine that doesn’t require growers to add sugar. The longer growing season also allows the fruit to sit on the vine longer and ripen more, giving the grapes a more “balanced” flavor.

Places like Italy, Spain, and California are well-known for their wines, but it is these areas that have the most to lose from the effects of climate change, scientists and agricultural experts said. If the world warms by 2 degree Celsius, or 3.6 degrees F, traditional wine growing regions could shrink up to 56 percent as temperatures rise and precipitation decreases, according to a study published last year in the Proceedings of the National Academy of Sciences.

An increase in the severity and frequency of extreme weather will also take a toll. Wildfires, for example, pose a major threat to vineyards in the U.S. West. California produces around 85 percent of the wine consumed in the U.S. Fires last year led to the smallest grape harvest for the state since 2011, equivalent to a loss of 80 million gallons of wine. Once a vine is hit by fire, it can take three to five years for it to grow grapes again.

While Michigan doesn’t have nearly the same risk from wildfires as wine-growing regions in the West, it will have to battle other climatic challenges. The state is projected to experience more extreme heat and precipitation events as the climate warms. In early April, Traverse City experienced an 80-degree F day. Typically, the region wouldn’t see such warm weather until July. High temperatures mean an early start to grape growth, which means a longer growing season and more yield. “It could be amazing,” Stassen said, “but there’s always that risk of it getting really cold again.” If frost hits the vines after they bud, they could be seriously damaged or not produce any fruit.

To reduce the chance of a too-early bud, some growers spray water onto the vines when temperatures drop, forming a protective layer of ice. Others use wind machines to blow warm air over their crops to prevent frost. In recent years, Stassen has started tying some of the grape branches to the irrigation line on the ground and plowing over them with snow so they will be insulated during January and February when it’s coldest.

In the last 50 years, average precipitation in the Midwest has also increased by 5 to 10 percent. A lot of water and humidity can increase problems with pests and disease. In the last few years, Spotted Wing Drosophila, a type of vinegar fly (commonly known as fruit fly), has become a huge issue for wine growers in the region. It was first found in Michigan in 2010. Most vinegar flies only lay eggs in damaged fruit, but Spotted Wing Drosophila will cut a hole into healthy fruit to lay their eggs, damaging the grape. They can cause even more damage by introducing sour rot and fungal disease to the fruit.

Even with all of the challenges, Michigan winemakers remain optimistic about their ability to adapt to the effects of climate change, to keep growing the state’s wine industry, and producing high-quality wines. Many think Michigan will soon be a premier wine-growing region in the U.S. For those who have been growing in Michigan for years, St. Julian’s Oxley said playfully, “We think it already is.”

Home Videos The WORLD of WINE – Wine News. Cheap wine, tasting notes and cooking with wine The World of Wine – May 2021 … END_OF_DOCUMENT_TOKEN_TO_BE_REPLACED

How to visit Napa Valley on a Budget. In this video Carson and I explain a few ways to enjoy Napa on the cheap. Tip and advice about how to visit Napa … END_OF_DOCUMENT_TOKEN_TO_BE_REPLACED

Home Videos Get To Know Argentina Wine | Wine Folly If you love Malbec, Argentina is your ultimate wine region. But that’s not … END_OF_DOCUMENT_TOKEN_TO_BE_REPLACED