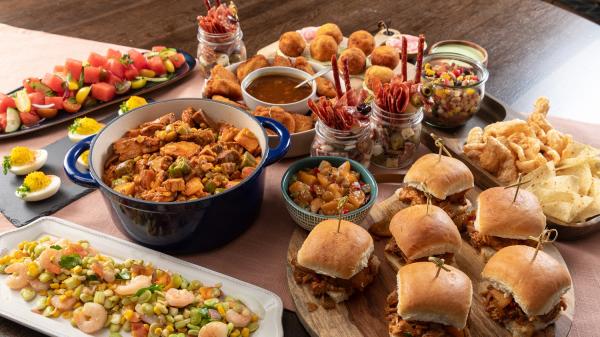 Churchill Downs today revealed the official menus of the 147th Kentucky Derby presented by Woodford Reserve, with a special twist to help fans nationwide celebrate from home. For the first time, foodies everywhere will have an exclusive opportunity to learn directly from Churchill Downs’ Executive Chef David Danielson, through an engaging online cooking experience. By combining the highly anticipated at-home menu with all-new virtual cooking classes, Churchill Downs is making it easy to partake in authentic Derby traditions at home.

This year’s Kentucky Derby At-Home Menu, crafted by the renowned Chef Danielson, is designed to inspire fans and newcomers alike to craft a winning spread in honor of “The Most Exciting Two Minutes in Sports.” Featuring an assortment of easy-to-make, authentic recipes influenced by the dishes served at Churchill Downs, the menu allows people across the country to experience a taste of Louisville. From individually served “Jar-Cuterie” appetizers to kid-friendly takes on classic Kentucky fare, this year’s at-home recipes will transform kitchens and backyards nationwide into a day at the races.

The accompanying virtual cooking class series gives culinary connoisseurs unprecedented access to Chef Danielson and a virtual look inside his kitchen. Foodies can follow along as Chef Danielson dishes out the secrets behind two of this year’s at-home specialties, including Chicken Nuggets with Kentuckyaki Glaze for the whole family, as well as delicious Pulled Pork Sliders with a tangy Peach & Vidalia Onion Chutney.

“As more fans will be watching the Kentucky Derby from home this year, we want to ensure everyone has the opportunity to enjoy the culinary traditions of this iconic event,” Chef Danielson said. “Between our at-home menu and cooking demos, we hope to deliver festive Louisville staples to your doorstep.”

As part of the series, bourbon ambassador and industry leader Tim Knittel, will host a masterful mixology class for shaking up classic Derby cocktails like the Woodford Reserve Spire and Mint Julep. With the help of these step-by-step demonstrations, hosts and hostesses can wow their loved ones with Triple Crown-worthy dishes on Derby.

New this year, each dish on the at-home menu is paired with a wine and cocktail by the expert Sommeliers and Distillers from Churchill Downs’ partners, giving food lovers a complete, flavorful taste of Derby.

To explore recipes for the Kentucky Derby At-Home Menu and learn alongside Churchill Downs’ top experts via the virtual cooking classes, please visit here. For more Derby at home inspiration, visit www.kentuckyderbyathome.com and follow us on Instagram and Facebook.

Chef Danielson has been Churchill Downs’ executive chef since 2013. Classically trained, Danielson studied at the Dumas Pere school of French cooking and later continued at the renowned hotel school Ecole Hotelier Tain l’ Hermitage in France, honing his culinary skills at several Michelin-starred restaurants. Upon returning to the United States, Chef Danielson worked as the executive chef at New York’s United Nations Plaza Hotel and at Chicago favorites the Ritz-Carlton and Charlie Trotter’s. He also served as personal chef to the British Consulate General. Chef Danielson has also lent his culinary expertise to a variety of major events, including the Olympics, PGA Championships, the U.S. Open Tennis Tournament, and the GRAMMY Awards.

Tim Knittel has been the bourbon ambassador of Churchill Downs since 2020. A certified Stave & Thief Society Bourbon Steward with more than 10 years of experience in Kentucky bourbon hospitality and tourism, Knittel founded Distilled Living in 2016 to provide bourbon education and sensory training for individuals, restaurant, and bar staff for corporate and fundraising events. Additionally, Knittel is the Bourbon-Steward-In-Residence at The Kentucky Castle and Adjunct Professor at Midway University. Prior to his work at Churchill Downs and Distilled Living, Knittel served as the first Homeplace Host for Woodford Reserve responsible for VIP tours and tastings and representing the brand and master distiller at the distillery.

Home Videos The WORLD of WINE – Wine News. Cheap wine, tasting notes and cooking with wine The World of Wine – May 2021 … END_OF_DOCUMENT_TOKEN_TO_BE_REPLACED

How to visit Napa Valley on a Budget. In this video Carson and I explain a few ways to enjoy Napa on the cheap. Tip and advice about how to visit Napa … END_OF_DOCUMENT_TOKEN_TO_BE_REPLACED

Home Videos Get To Know Argentina Wine | Wine Folly If you love Malbec, Argentina is your ultimate wine region. But that’s not … END_OF_DOCUMENT_TOKEN_TO_BE_REPLACED