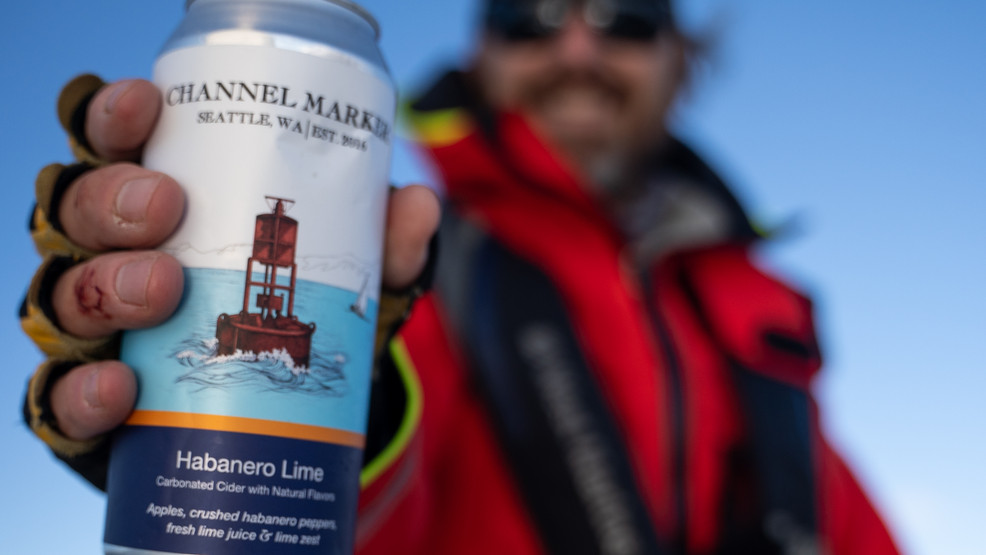 Zack Lough rode out many days of the pandemic in a garage. It was fellow sailor and business partner Nicole Lounsberry’s garage in Greenwood, to be exact. But Lough is pretty used to riding things out. Not long ago, he rode out a hurricane season in New Zealand. Sailing during hurricane season can be rough going, so instead, he took up seasonal work in the wine industry, making sauvignon blanc. He worked across the street from an apple orchard, and while reading a book that detailed the life of Johnny Appleseed, he decided to try his hand at making cider. Not surprisingly, everyone who tried his cider, loved it.

Far more attractive than sailing through a storm – in this perfect storm, Lough found himself making wine, across from an apple orchard, with an interest in cider. This project carried over when he returned to Seattle. With Lounsberry and another friend, Chris Irish, the three set off to form Channel Marker Cider, with Lough serving as head brewmaster. The flavors Channel Marker makes aren’t your run-of-the-mill ciders, and now is the best time to become a fan. Then you can brag to your friends that you were an honorary Channel Marker sailor before they became the hottest new taproom in Ballard.

Ballard is a fitting neighborhood for Channel Marker. In the nautical world, channel markers are navigational guides, marking the way for sailors to avoid potential dangers like sandbars, shallow rocks, or anything else you don’t want to run into, like other boats.

Off the water, Channel Marker is where you’re about to fall in love with Rhubarb Raspberry cider, Cucumber Blackberry cider, and the year-round favorite: Habanero Lime. Lough said the team uses as many local ingredients as possible with the star of the show, the apples, coming from Eastern Washington.

“We want people to feel acquainted with their beverages,” Lough said. “There’s this familiarity with our ingredients. People interact with these ingredients all the time in Seattle. It’s kind of like tasting your city.”

Channel Marker’s Rosemary Cran Ginger cider is a perfect example of this.

“You can literally walk down any street in Seattle and find a rosemary bush,” Lough said. But…dogs potentially pee on those, so you won’t find the Channel Marker team harvesting Seattle-sidewalk rosemary. But the blackberries, apples, and cucumbers may have come from their own backyards when they’re in season. Lough said that’s an especially great way to connect to the ingredients.

But backyard production is certainly not enough to meet the demand for Channel Marker Cider production, and they’ve also outgrown Lounsberry’s garage. The pandemic allowed the trio to focus on expansion and getting more local cider out to the community, which included offering cider in cans for the first time.

“We want to get bigger,” Lough said. “We’ve been bootstrapping this business since we started in 2016.”

But bootstrapping has worked. Channel Marker Cider has a collection of major awards like Craftcider Magazine 2020 Judge’s Pick for their Lavender Bergamot cider, a silver medal for the Honey Badger Cyser with a silver medal, and gold for the Rosemary Cran Ginger.

Soon those medals will move from their current home in the Channel Marker Cider garage to their new home base in Ballard, which will be both a production facility and a public taproom.

“Having people come interact with us on a daily basis in a taproom, it’s gonna be a huge game-changer,” Lough said.

Being a part of the community is one of the major reasons Channel Marker Cider is excited to open their taproom. Cider making itself is a community process, from the farmers growing apples to the harvesting crew, those pressing them into juice, all the way to the people cleaning a glass before pouring your cider of choice. “That’s why I love cider,” Lough said. “It’s a distillation of all of this community effort, and it’s representative of Washington state, too.”

Whether you’re adventuring out on the water or up for trying new flavor combinations in your own backyard, Channel Marker has a cider for that. “There’s a cider for everyone,” Lough said. And we’re not one to disagree with a brewmaster.

Channel Marker Cider anticipates their Ballard production facility to open in the fall and hopes the taproom will open by the end of 2021. In the meantime, check out Channel Marker’s website for info on where to grab yourself a can or where to find it on tap in the Seattle and Tacoma area.

Home Videos The WORLD of WINE – Wine News. Cheap wine, tasting notes and cooking with wine The World of Wine – May 2021 … END_OF_DOCUMENT_TOKEN_TO_BE_REPLACED

How to visit Napa Valley on a Budget. In this video Carson and I explain a few ways to enjoy Napa on the cheap. Tip and advice about how to visit Napa … END_OF_DOCUMENT_TOKEN_TO_BE_REPLACED

Home Videos Get To Know Argentina Wine | Wine Folly If you love Malbec, Argentina is your ultimate wine region. But that’s not … END_OF_DOCUMENT_TOKEN_TO_BE_REPLACED