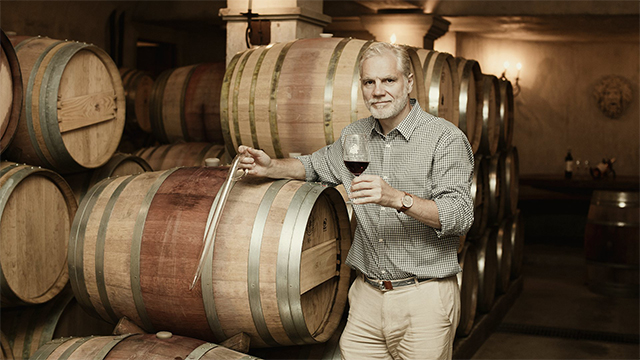 Bay Street Theater and Sag Harbor Center for the Arts is hosting a special soiree on Wednesday, February 24 at 6:00 p.m. that you won’t want to miss. During Bay Street‘s 30th Anniversary Season Kick-Off Benefit, guests will participate in a live, online wine tasting event led by Wölffer Estate Vineyard‘s master winemaker Roman Roth. All Wölffer wines will be sent directly to attendees’ homes prior to the event.

“We are extremely excited about 2021 and looking forward to putting COVID-filled days behind us. We know that theaters themselves will still be closed for some time, but we intend to forge ahead with a full outdoor season, with a slate of new works and musicals that lend themselves to the outside,” reflected Tracy Mitchell, Executive Director of Bay Street Theater.

Roth gives “voice” to his wines, produced by experience that covers three continents and stems from the dream of a 16-year-old boy in Rottweil, Germany’s Black Forest. He began a three-year apprenticeship at the Kaaiserstuhl Wine Cooperative, Oberrotweil, while attending technical school as a teenager. Upon completion, he traveled to the United States where he worked at the Saintsbury Estate in California and then to New South Wales, Australia at Rosemount Estate. Then, Roth returned to Germany where he became a winemaker at Winzerkeller Wiesloch near Heidelberg and earned his Master Winemaker and Cellar Master Degree from the College for Oenology and Viticulture in Weinsberg. In 1992, Roth became the first winemaker at Wölffer Estate Vineyard and established the Estate’s distinctive character: European elegance combined with the typicity of Long Island terroir. He has dedicated himself to promoting not only the wines of Wölffer Estate but of Long Island, where he has consulted with numerous vineyards and is currently the President of the Long Island Wine Council. His contribution to quality winemaking on Long Island was recognized at the 2003 East End Food & Wine Awards (judged by the American Sommelier Society), where he was named Winemaker of the Year.

“Our 30th Anniversary fundraising is also full steam ahead with this celebration in February in partnership with Wolffer Estate Vineyard, which is free to current Patron-level members,” Mitchell added. “But it is available to anyone who may wish to join and help support us as we continue to employ artists and staff members alike.”

Wölffer Estate Vineyard has been a beloved established on the East End of Long Island for 30 years. It is a center for innovation and hospitality. Founded in 1988 by Christian Wölffer, the Estate is now owned and operated by his children, Marc and Joey Wölffer, and Roth. Wölffer spans approximately 470 acres and the unique combination of Bridgehampton loam and breezes from the Atlantic Ocean provide maritime conditions perfect for achieving the balance of ripeness and acidity that has come to define Wölffer’s signature style.

Tickets to Bay Street’s 30th Anniversary Season Kick-Off Benefit are free for Bay Street Theater Patrons and discounted for donors at other levels. Tickets for other guests are $179, including the Wölffer wine (suggested for party of four). Attendees must reserve a spot by February 10. Ticket holders will be sent a private link to join the tasting on February 24.

Sydney Braat is a Hamptons-raised and NYC-living journalist. She enjoys splitting her time between the bustling city life and relaxing atmosphere of the Hamptons. When she’s not writing, Sydney is traveling. She thrives off of new experiences, cultures, cuisine, and languages. Sydney writes about the arts, philanthropy, food & wine, and shopping.

Home Videos The WORLD of WINE – Wine News. Cheap wine, tasting notes and cooking with wine The World of Wine – May 2021 … END_OF_DOCUMENT_TOKEN_TO_BE_REPLACED

How to visit Napa Valley on a Budget. In this video Carson and I explain a few ways to enjoy Napa on the cheap. Tip and advice about how to visit Napa … END_OF_DOCUMENT_TOKEN_TO_BE_REPLACED

Home Videos Get To Know Argentina Wine | Wine Folly If you love Malbec, Argentina is your ultimate wine region. But that’s not … END_OF_DOCUMENT_TOKEN_TO_BE_REPLACED