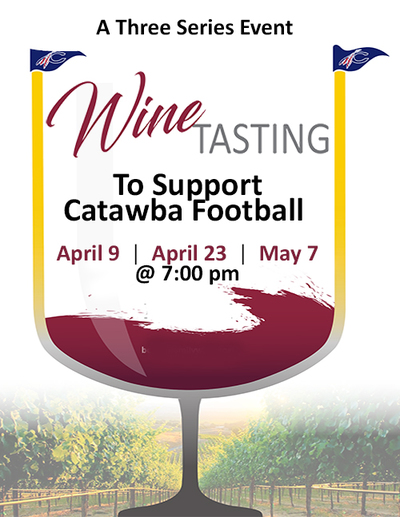 He is the Vintner at Benton Family Wines (BFW), parent company for the Croze, Smith Wooton, and Corvus brands. Warren Robertson, an English major, Catawba Class of ’97, is General Manager of BFW. He also played football at Catawba, and the two are college friends.

The Catawba event will be virtual and is scheduled for 7 p.m. on three dates: April 9, April 23, and May 7. Each wine tasting will last 45 minutes. For a $200 contribution, the participant will attend each of the three nights. One wine will be showcased each night. Along with the wines, each participant will receive an informational newsletter for each individual wine, including recipes and cheese pairings, and tasting notes for the wines. Space is limited. Reservations can be made online at www.catawba.edu/winetasting or by calling (704) 637-4394. A total of $70 is tax deductible.

The order of the three wines for the tastings will be:

After a slow fermentation, the wine is cellared in the barrels on the lees for an additional year to allow proper aging. The resulting wine showcases classic Chardonnay aromas of crisp apple, light tropical fruits, and nuts. The wine coats the palate and finishes with a bright acidity that leaves the mouth watering.

The Catawba fundraiser also includes a raffle with the winner receiving a trip for two, valued at $5,000-$7,000, to Napa Valley and BFW. The trip includes a four-night, three-day stay in Napa Valley, flight, hotel, tastings, transportation, and dinners. Two of the three days involves an itinerary and transportation planned by BFW. The third day is a free event to allow for exploring the Napa wine region. Dinner with a winemaker and another at a Michelin star restaurant are also part of the raffle. The drawing will be on May 7, the last day of the wine tasting.

BFW is one of the few ultra-boutique, family-owned and operated wineries in Napa Valley. Benton wines are described as less American and more French. Benton trained under a 13th generation Bordeaux from Saint-Emilion, Louis de Coninck, and has been making wines in the French style for 20 years.

Benton and his wife, Kara, founded the winery in 2015, after Benton established himself as a winemaker in North Carolina and had earned a double gold medal for his rosé in The San Francisco Chronicle Wine Competition.

Upon graduation from Catawba, he spent 10 years in corporate American before the romance of wine lured him away. After leaving his corporate post, he spent the next several years traveling wine regions and networking in the wine industry, eventually returning to Surry Community College to obtain degrees in Viticulture and Enology. He taught several classes at the community college and also helped make wine for the college’s bonded winery, Surry Cellars.

From early mornings in the vineyard to harvest and fermentation in the winery, he has worked every aspect of wine production and the wine business, from retail to distribution management. As winemaker for BFW, he is responsible for all aspects of production, grower relations, and he manages nationwide distribution for the company. BFW produces several wine brands with Croze Napa Valley being the flagship. With an emphasis on the production of wines that demonstrate balance and a European style, Croze distinguishes itself from many of its Napa neighbors. “Our philosophy is steeped in classic European tradition, and our wines have a profound sense of place,” he said. “Vintages are meticulously handcrafted from vineyard to bottle, ensuring quality and recognizable style that is Croze.”

He and his wife and son Callan work together with a talented staff to bring Croze wines to life each vintage. He also owns a vineyard management company, Brix, with his Benton team farming vineyard sites from one to five acres in size, what Benton calls “gentleman farmer sites.” He uses the fruits from some of these small vineyards in Benton wines.

He has 20 years of experience in restaurant management and was General Manager for a winery and fine dining restaurant in Georgia, before moving to Napa. He studied Wine Business Management at Sonoma State University and obtained Certification as a Sommelier. He has traveled to some of the country’s most acclaimed wine-growing regions.

Home Videos The WORLD of WINE – Wine News. Cheap wine, tasting notes and cooking with wine The World of Wine – May 2021 … END_OF_DOCUMENT_TOKEN_TO_BE_REPLACED

How to visit Napa Valley on a Budget. In this video Carson and I explain a few ways to enjoy Napa on the cheap. Tip and advice about how to visit Napa … END_OF_DOCUMENT_TOKEN_TO_BE_REPLACED

Home Videos Get To Know Argentina Wine | Wine Folly If you love Malbec, Argentina is your ultimate wine region. But that’s not … END_OF_DOCUMENT_TOKEN_TO_BE_REPLACED