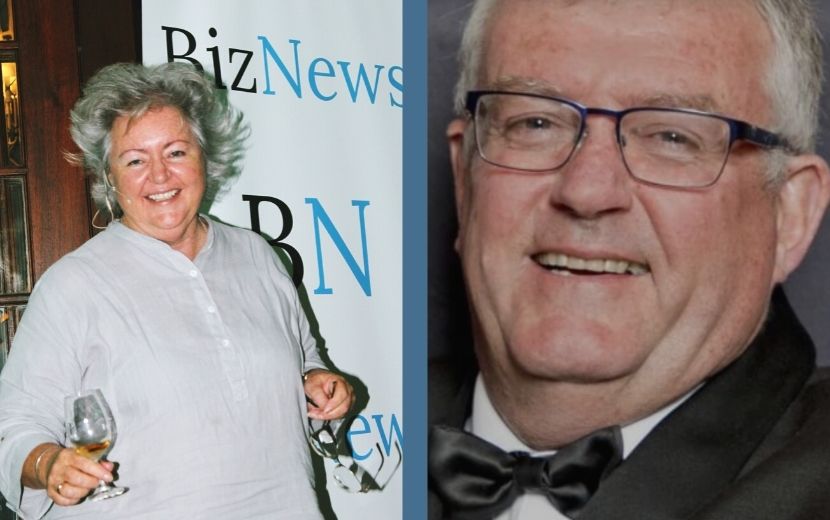 Simonsig Wine Estate is synonymous with the history of the South African wine industry, the Stellenbosch wine region, and the Malan family name. In this episode of Carrie’s Corner, wine connoisseur Carrie Adams speaks to Johan Malan – the recipient of The 40th Diners Club Winemaker of the Year Award for 2020. His father, Frans Malan, produced the first bottle of the much-loved Simonsig Kaapse Vonkel – one his many pioneering approaches to the South African wine industry. Johan tells the story of his father’s legacy. – Nadya Swart

Johan Malan on his family history:

My father actually grew up in Wellington on a wine farm there and went to school in Cape Town at Jan van Riebeeck [High School]. So he was already used to the big city from a young age, and when he finally got to Stellenbosch University he studied winemaking, viticulture and enology. During that time, his father died at a very young age. So an uncle of his told him that he must rather sell the farm, because he can always buy another farm – but he will never be able to get his geleerdheid [studies]. So his studies had to take priority, which was actually done, I think, in the late 40s. And then, during his time at Stellenbosch University, he met my mother whose father happened to have a wine farm in Stellenbosch.

That was the beginning of his career in Stellenbosh because during the first 10 years, he just rented the farm from his father-in-law. And then finally in 1964, he took it over and immediately started expanding and bought another vineyard across the valley and modernised the cellars. In those days, cold fermentation was really very new – it started in the late 50s. And he was the first private winery to install a refrigeration plant – like a cooling plant – to chill the water that would run over the tanks to control fermentation temperature.

That was in 1964, and obviously, I think he spent a lot of money and was developing the second farm and then realised that making wine to sell to the big merchants at the minimum, good wine price – which at the time he told me was nine cents a litre – was not going to pay the bills. So then in 1968, he bottled the first wines under the Simonsig label, which – just for the English-speaking people – means the view of Simon or Simon’s view, which is directly opposite the estate. So we’ve got this beautiful view of Simonsberg, which was named after the founder of the town of Stellenbosch, Simon van der Stel.

On his father’s pioneering:

The first three wines were bottled in 1968. So that was our celebrations in 2018, because it was 50 years later. At that time, Simonsig was only the fifth privately-owned wine estate in Stellenbosch to bottle their own wine. And outside of Stellenbosch there were less than five. So, it was a very pioneering thing to do. I think it took a lot of courage and it was very difficult and very different compared to what the situation is today, because the wine drinking culture was so underdeveloped and very few people actually drank anything but sweetish white wine. And red wine was really a very small part of the market. So, it was a difficult time to start – but that led him to innovate and to do a lot of novel things.

To get a wider view on the international world of wine, he travelled to France in 1969 with his good friend, Oom Niel Joubert of Spier and my mother. And they were in the car and I think they spent about two months traveling around Europe. And that is where a lot of the new ideas were born because the wine route idea happened in Burgundy, and many years later, he took me and my brother on a trip to Europe and France, and he actually showed me this and said, ‘This is where I got the idea for the wine route’.

On the launch of the Stellenbosch Wine Route:

Finally, in 1971, Stellenbosch Wine Route was founded – the 17th of April; 50 years ago. A big ball or a function was held in the Stellenbosch Town Hall and the Wine Route was officially launched. Some of the other issues that they had to overcome were, firstly, they weren’t allowed to put up signage next to the road to tell people that this way was Delheim, etc.

You won’t believe it, but the authorities said that it will distract people’s attention from the road and they will make accidents. And wow. So again, they thought of a plan and they invited the administrator of the Cape Province in those days to come out to the Wine Route.

They had a few glasses of Kaapse Vonkel and they put him in a minibus and off to Delheim they went. And they said to him, ‘You can see – how are you going to know where to go?’ So, immediately he put up the signs – and the battle was won.

On getting more people in South Africa to value the quality of our local bubbly:

There’s definitely a very positive development taking place. We always had the Cap Classique Festival that the association has been running in Franschhoek for many years now. And we always invited some French Champagne houses so that people could enjoy both. And I think that sort of openness was an indication that we’re not there to compete with French Champagne.

It’s not that we are scared of French Champagne, but the question I get quite often is, ‘How do we compare with French Champagne?’ The main story is that we don’t ever try to make a copy of French Champagne because we’ll never be successful if we are trying to emulate what they do with their very northerly location, very cold marginal climate, the very torque-rich soils.

We are in the Cape. We have one thing that they don’t have and that’s lots of sunshine. We have a moderate climate and sunshine in abundance. So, that means our Cap Classique wines are perhaps more fruit driven and more expressive because of the access to sunshine and the climate. Our soils are also very different. Even within the Western Cape, the soils within Robertson compared to Stellenbosch and Franschhoek and up the West Coast – they’re all very different. And I think that also gives us an expression of something that is true to our terroir.

On the uniqueness of South Africa’s Cap Classique:

We must be honest and say we are making a wine in the Cape and that has to express the characteristics from our terroir. The other thing I also want to stress is that there’s a big change in the market happening and it’s been happening for a few years now; there’s a huge growth in the popularity of Cap Classiques that are slightly sweeter. The French call it Demi-Sec, which – if you translate it directly – means half-dry.

In South Africa, the market actually coined a whole new concept and it’s called Nectar. So there are many different Nectars on the market with a slightly higher dosage level – so it’s slightly sweeter. And I find that this is growing at a very rapid pace.  I always say there are a lot of first generation wine drinkers in South Africa and to suddenly have a glass of Brut Cap Classique can be very challenging if your palate is not used to it. It’s very dry. So, with a little bit of sweetness, it becomes something that is much easier to enjoy and to drink and easier to start to like. And that is the new trend now where people are discovering Cap Classique with a slightly sweeter taste and it’s doing wonders for the category.

Home Videos The WORLD of WINE – Wine News. Cheap wine, tasting notes and cooking with wine The World of Wine – May 2021 … END_OF_DOCUMENT_TOKEN_TO_BE_REPLACED

How to visit Napa Valley on a Budget. In this video Carson and I explain a few ways to enjoy Napa on the cheap. Tip and advice about how to visit Napa … END_OF_DOCUMENT_TOKEN_TO_BE_REPLACED

Home Videos Get To Know Argentina Wine | Wine Folly If you love Malbec, Argentina is your ultimate wine region. But that’s not … END_OF_DOCUMENT_TOKEN_TO_BE_REPLACED