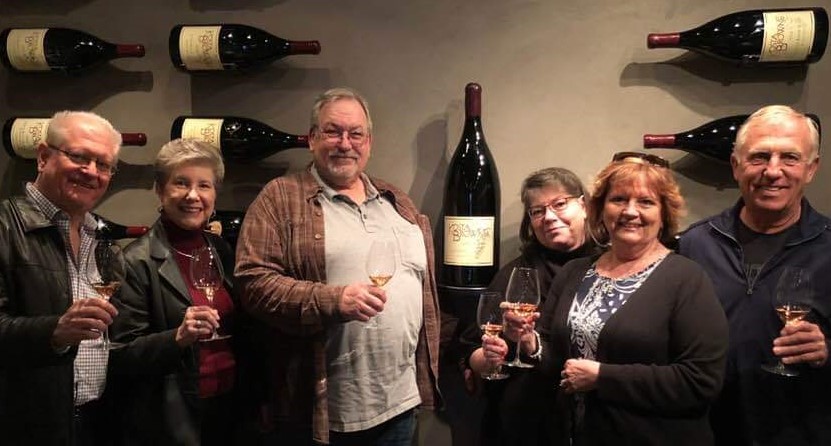 COVID-19 sucks, big time! I sorely miss dining indoors, hugging my friends, going wine tasting, and just generally being normal. I try to quell my anxiety by remembering what life used to be like. What follows is a memory of how glorious life can be and what we can pray will be our future.

About four years ago, while he was still with Kosta Browne, Michael Browne generously donated to the Santa Clarita Valley Boys & Girls Club three magnums of some of his finest pinot noir, a full tour and tasting at Kosta Browne’s new production facilities in Sebastopol, and a private catered lunch, featuring delightful entrees paired professionally with KB chardonnay and pinot noir.

Realizing what a unique experience this presented, I convinced two couples to join Terry and I in bidding on this at the club auction in 2017. After some vigorous back-and-forth with other wine lovers who knew this package could not be obtained any other way, we succeeded in placing the winning bid.

Let me tell you — it was worth every penny.

In February 2018, the two other couples (the Hansens and the Eggers) and Terry and I spent a full day at KB’s extravagant headquarters. I don’t remember how big the entire facility is, but it spans three buildings and dwarfs what Kosta and Browne started with.

This is how Wine Spectator describes KB’s beginnings: “The only venture capital that Kosta Browne Winery needed for its first vintage, 1997, was 20 bucks a night in pooled tip money. That’s how Dan Kosta and Michael Browne raised $1,300, each contributing $10 a day from the tips they earned working at John Ash & Co., a Sonoma County restaurant. Their small investment bought a half-ton of pinot noir, a single barrel and a used, hand-crank crusher.”

KB has grown from a tiny winery to now being in the Duckhorn portfolio and making 30,000 cases of wine per year.

So, in February 2018, the Kanowskys, Hansens and Eggers met up in Sonoma County and made our way to KB. Greeted by Damon Wong, we enjoyed a magnificent tour of the quite large winery, all very modern with the latest equipment.

Then we sat down to an exquisite three-hour lunch. Let me tell you about that.

Seared scallops highlighted the first course, accompanied by fennel and carrot puree, tarragon beurre blanc, and roasted Sebastopol mushrooms. Terry really doesn’t care for scallops, but Chef Jamil Peden won her over that day. They were outstanding, meaty and flavorful. To her surprise, she loved them. The fennel provided a different dimension to the pureed carrots, which were quite tasty.

Served with the scallops was a great representation of what a great vintage 2016 was for California chardonnay, the KB One Sixteen Chardonnay. Just a small production, the wine was lush, with pear on the nose and apple on the palate and great acidity balance.

Then came Liberty Farms duck breast, joined by yam and bacon hash, beet, and young kale (I hadn’t realized you could tell kale’s age), along with maple gastrique. Oh, my God! The duck was tender, a touch sweet, just amazing. Chef Jamil took the kale (not generally one of my faves), rubbed it with lemon and seasoned it with salt and olive oil, and let it rest an hour. Surprisingly, it was inviting.

The duck was paired with two pinots, the 2013 Gap’s Crown and the 2012 Rosella’s. The Rosella’s highlights were farm-yard on the nose and Bing cherry on the taste. Gap’s Crown sang and was the day’s highlight. Aromas of bright cherries with strawberry flavors at first, then exploding, hitting with raspberry. A wine that evolves in the glass.

Thank you, Michael Browne, for providing me with some wonderful remembrances to help me get to the other side of COVID-19.

Carl Kanowsky is an attorney, a fledgling baker, an enthusiastic cook and an expert wine drinker.

Home Videos The WORLD of WINE – Wine News. Cheap wine, tasting notes and cooking with wine The World of Wine – May 2021 … END_OF_DOCUMENT_TOKEN_TO_BE_REPLACED

How to visit Napa Valley on a Budget. In this video Carson and I explain a few ways to enjoy Napa on the cheap. Tip and advice about how to visit Napa … END_OF_DOCUMENT_TOKEN_TO_BE_REPLACED

Home Videos Get To Know Argentina Wine | Wine Folly If you love Malbec, Argentina is your ultimate wine region. But that’s not … END_OF_DOCUMENT_TOKEN_TO_BE_REPLACED