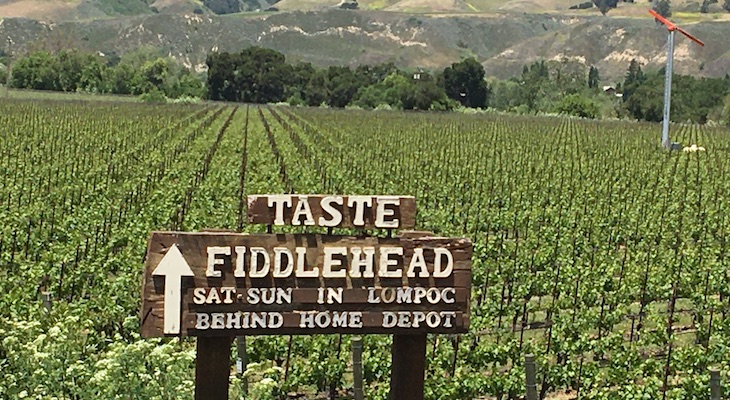 A cannabis operation along the Santa Ynez River in the fabled Sta. Rita Hills got a green light from the county Planning Commission this month with no opposition from surrounding vineyards, including Sanford, Lafond and Sea Smoke, some of the most iconic names in the region.

“We’re getting along fine with all of our neighbors,” John De Friel, the CEO of Central Coast Agriculture at 5645 Santa Rosa Road, told commissioners at a May 12 hearing on the project.

Most notably, those neighbors include the Fiddlestix Vineyard, a 130-acre operation to the west that De Friel reported to the county for a pesticide violation in 2019. Since then, De Friel told the commissioners, he, the winemaker and her sprayer have worked things out. He placed their pesticide agreements in the public record to prove it.

“We’ve been operating side-by-side a couple of years now, and have had no issues,” De Friel said.

In a 3-1 vote, with Commissioner Dan Blough of Santa Maria absent, the commissioners approved a zoning permit for 5645 Santa Rosa Road, lauding De Friel’s peacemaking efforts. More often, they hear from vintners who are blasting the cannabis industry for stinking up their tasting rooms with the stench of pot and allegedly “tainting” their grapes.

“It is to be commended that the applicant worked with all of these vintners and the neighbors are good with it,” said Chair Larry Ferini, who represents part of the Sta. Rita Hills, a federally-designated American Viticultural Area between Lompoc and Buellton. “This is refreshing to see.”

Commissioner Michael Cooney, who represents the Carpinteria Valley, a mecca for the cannabis industry, cast the sole vote against De Friel’s project last week, alluding to the depleted groundwater basin in the region.

“We ought to have a formal statement on each project on why it’s permissible to continue to draw water from this basin,” Cooney said. “Throughout our state, we’re deep into a condition of drought. If the cannabis industry is sucking up more than is necessary, we have to step in and say we can’t permit this project to go forward.” A zoning permit for the 24-acre Central Coast Agriculture cannabis operation at 5645 Santa Rosa Road west of Buellton was approved by the County Planning Commission on May 12. The owner, John De Friel, also runs a 30-acre cannabis operation at 8701 Santa Rosa; it includes a processing building and was approved by the County Board of Supervisors on May 4. (Courtesy photo)

Back in 2019, the county Agricultural Commissioner found that the wind had blown organic pesticides from Fiddlestix toward De Friel’s hoop-house cannabis, posing a hazard to his crop. The sprayer for Fiddlestix, Chalky Ridge Vineyard Management, was ordered to pay a $700 fine.

Kathy Joseph, the vineyard owner and manager, later said she switched to a pesticide that would not harm cannabis; but, she said, it was ineffective on her own crop. Five acres of chardonnay grapes suffered from mildew and she lost $80,000, Joseph said. Last year, she described her relationship with De Friel as “not amiable or pleasant.”

But in February of this year, Joseph and her business partner, Treasury Wine Estates, signed a pesticide agreement with De Friel, similar to one that he previously signed with Chalky Ridge. In return for some restrictions on spraying methods and equipment, De Friel agreed not to sue the sprayer or Joseph and her partners if pesticide drift from Fiddlestix should ever contaminate his plants.

The documents show that the Fiddlestix team tested various spray rigs and, together with De Friel, settled on one that claims to reduce the overall amount of pesticide that is needed. De Friel purchased the equipment and stores it on his property, charging Joseph $1 per month rent. In addition, De Friel will pay for and install a wind-fence along their shared property line whenever pesticides are being sprayed at the vineyard.

The sprayer must give De Friel at least 18 hours’ notice. De Friel can post an observer, and the observer can call off the operation if the wind is carrying the spray toward his cannabis crop.

In an interview this week, Joseph called the agreement a “good solution,” absent any county regulations that would have required a significant buffer zone between her grapes and De Friel’s cannabis. Fiddlestix is located on a windy terrace; De Friel’s operation is downwind on a lower plateau.

“We felt our hands were tied because the county chose not to require any setbacks or restrictions,” Joseph said. “Because of our topography and because our neighbors are very close to the property line, this was a good solution to protect our grapes and likewise their plants.

“It was the best way to coexist.”

In addition, the record shows, De Friel has signed a confidential memorandum of understanding with the Terlato Wine Group, the owners of the Sanford Winery & Vineyards, located 4,500 feet and 1,500 feet to the southwest, respectively. 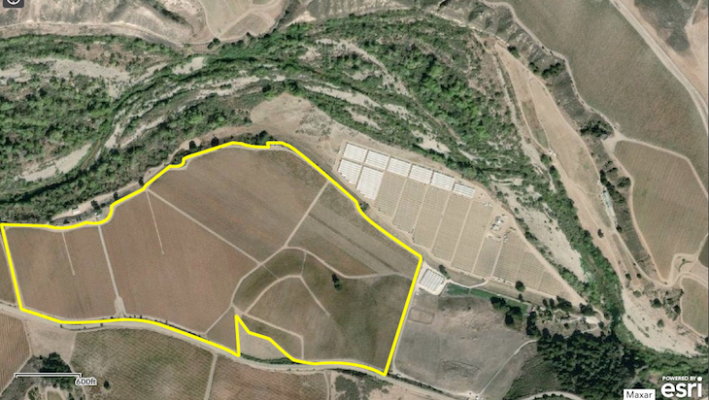 The Central Coast Agriculture cannabis hoop-house operation at 5645 lies along the Santa Ynez River near major vineyards. The owner, John De Friel, has signed a pesticide agreement with the Fiddlestix Vineyard, shown here to the west and south within the yellow line; and a memorandum of understanding with the Sanford Vineyards & Winery to the south and east, on the opposite side of the road.

De Friel is growing cannabis at two locations on Santa Rosa Road. Earlier this month, the county Board of Supervisors approved a conditional use permit for his operation at 8701 Santa Rosa, including 30 acres of cannabis, mostly under white plastic hoops, and a processing building.

For that project, which lies half a mile from a rural neighborhood, De Friel signed off on a comprehensive odor control plan that was requested by the Santa Barbara Coalition for Responsible Cannabis, a countywide group of farmers, vintners and residents from the Cuyama Valley to the Carpinteria Valley. In return, the coalition agreed not to sue De Friel over his conditional use permit.

But Marc Chytilo, a coalition attorney, said this week that the group would appeal to the county supervisors to deny the permit for 5645 Santa Rosa – not because of the smell the project may generate, but because of water supply concerns.

The coalition contends that De Friel’s operation is dependent on wells supplied by subterranean “channels” from the Santa Ynez River – and the state Water Resources Control Board has banned the use of river water for cannabis between April 1 and October 31.

“This is a big new issue,” Chytilo told the commission on May 12. “… This project is relying on river water, since river water influences groundwater.”

In March, De Friel canceled his applications to the state board claiming river water rights on both of his Santa Rosa Road properties. He argues that his wells are supplied by groundwater that is not connected to the river. And in any case, his team told the commission, the cannabis operation at 5645 Santa Rosa is using much less water than Tutti Frutti Farms, the vegetable operation that preceded Central Coast Agriculture at that location.

“The state reviewed our wells and they suggested we resubmit based on groundwater,” Matt Allen, De Friel’s attorney, said. “This was done on their advice.”

Nearly 800 acres of cannabis “grows” are in various stages of county review for the Sta. Rita Hills. Nancy Emerson, president of Women’s Environmental Watch, a Santa Ynez Valley group, was the only person from the public speaking in opposition to De Friel’s second project on May 12. She spoke of the smell that pervades Buellton during the cannabis harvests, and she urged the commission to “pause” its vote until the county’s cannabis ordinance can be amended.

“We think no pause means odor problems will be cumulatively concentrated and permanently unsolvable in this corridor,” Emerson said. “… If we were you or staff, we would be asking what we could do to head off this impending disaster.”

Melinda Burns volunteers as a freelance journalist in Santa Barbara as a community service; she offers her news reports to multiple local publications, at the same time, for free.

Home Videos The WORLD of WINE – Wine News. Cheap wine, tasting notes and cooking with wine The World of Wine – May 2021 … END_OF_DOCUMENT_TOKEN_TO_BE_REPLACED

How to visit Napa Valley on a Budget. In this video Carson and I explain a few ways to enjoy Napa on the cheap. Tip and advice about how to visit Napa … END_OF_DOCUMENT_TOKEN_TO_BE_REPLACED

Home Videos Get To Know Argentina Wine | Wine Folly If you love Malbec, Argentina is your ultimate wine region. But that’s not … END_OF_DOCUMENT_TOKEN_TO_BE_REPLACED