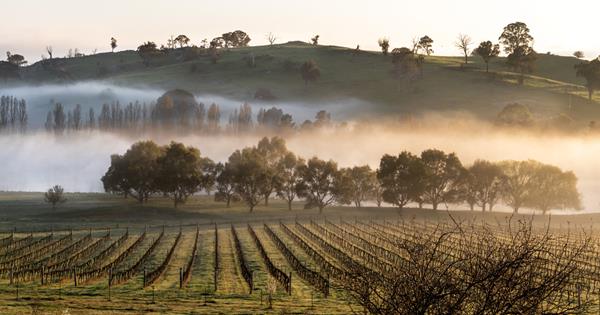 One of the first things you need to know about Canberra’s wineries is that most of them aren’t actually in Canberra. This cool climate wine region spreads over several clustered regions – Lake George, Murrumbateman, Yass and Hall to the north, Bungendore and Wamboin to the east, many of which blur seamlessly into New South Wales. But no one’s splitting hairs when the wine’s this good – particularly the region’s flagship riesling – the views stretch for years, and everyone has time for a chat, whichever side of the border you come from.

“I made my first wine when I was nine,” says Stephanie Helm, head winemaker at The Vintner’s Daughter in Murrumbateman who is, as her winery’s name suggests, the daughter of one of the district’s founding fathers: former CSIRO insect ecologist Ken Helm who opened Helm Wines in 1973. “If you grow up on a cattle farm, you learn about cattle. I’d choose a barrel, dad would give me some grapes and I’d follow a recipe and see what happened,” she says. What happened was that Stephanie won her first award at only 13, for a cabernet she made on her own.

Fast forward several years (“I got sick of it for a while in my late teens; everyone else was having fun while I was pulling nets off vines,” she says) and she now runs her own operation with husband Benjamin Osborne, offering daily tastings of their multi-gonged riesling, creamy sparkling chardonnay and the region’s signature shiraz viognier, a unique red-white blend made famous by another of the region’s wine giants (and, of course, ex-CSIRO) John Kirk at Clonakilla.

At Mount Majura Vineyard, another CSIRO alumnus Dr Frank van de Loo – his background is in agricultural science and plant biology – makes traditional-style wines from exciting grapes like graciano, mondeuse and a tempranillo that holds the tiniest hint of eucalyptus thanks to the stately yellow box gums that grow at one end of the plantings, found on the wine lists at Bennelong and Spice Temple in Sydney. Daily tastings are accompanied by cheese and charcuterie boards and in winter they’re likely to have infused the brie with truffles from The Truffle Farm next door.

If you only have time for one big, order-everything-on-the-menu lunch make it Pialligo Estate’s Pavilion Dining on the banks of the Molonglo River to the east of the capital, now headed up by ex-Cumulus chef Mark Glenn. An entrée of duck ham – smoked just metres away from where it hits your plate – is accented with baby asparagus and sugar snap peas pulled straight from the garden, served as you gaze across to the stately spire of Parliament House in the distance.

At Poachers Pantry, 30 minutes to the city’s north in the Yass Valley region, you can pick up a picnic hamper of house-smoked ham, homemade pickles, Tilba Real Dairy cheese and flatbread and graze through it under the shade of the fir trees on the lawn, while the elevated terrace at Brindabella Hills Winery is great for groups and has wild, wide views across the Murrumbidgee River.

Standalone accommodation is a little thin on the ground around the region, so many visitors choose to stay in Canberra itself and day trip out to the wineries. But a couple of enterprising properties have rightly figured out that settling in for a night’s sleep next to the grapes is not only a lovely concept but also negates the need for a designated driver.

At Tallagandra Hill Winery in Gundaroo, owners David Faulks and Mary McAvoy have built three compact cottages – The Great Ron, after Faulks’ late father, The Prodigal Daughter named for Irish immigrant Mary, and The Favourite Son, a claim shared by the couple’s two sons Ben and Sam (and, depending on who you ask, the family’s late golden retriever, Mac) – which you can retire to after an afternoon tasting wine and alternating a little AC/DC or Simon and Garfunkel on the vintage jukebox in the bar.

At Lake George Winery on the shores of the mirage-like disappearing Lake George on the road to Sydney, you can stay in the pet-friendly Little George tiny house, which sits on a hilltop overlooking historic Collector to the north and the property’s vines and orchards to the south. There’s an excellent bushwalk to the rear of the cottage
that leads to Lerida Estate – stop in for a tasting, then meander back to Lake George’s restaurant, Westering, for lunch. Specifically for owner Sarah McDougall’s favourite food and wine pairing: riesling and hot chips. “Riesling cuts perfectly through all that tasty saltiness,” she says.

With the wineries in easy striking distance it’s worth basing yourself in the capital itself, for at least some of your wine region stay. Midnight Hotel in lively Braddon looks like it sounds; moody and brooding with rooms designed like comforting caves, complete with well-stocked gratis mini-bars of Bentspoke beer, Voss water and DIY martini kits.

A short walk down the road, book the Sort It Out set menu dinner at Australia’s first riesling-centric wine bar, Rizla, a deliciously efficient way to try a huge selection of the best wines of the region, particularly those without a cellar door. The list changes constantly but it’s always worth getting your hands on a quirky riesling from Jake Carter of Sholto or a Lark Hill chardonnay pinot noir, which Rizla owner Andy Day describes as “probably the best vintage sparkling from mainland Australia, in our humble opinion”.

“We’re the new kid on an old block,” says co-owner and former Sydney ad executive Tony Mansfield of Contentious Character, the winery he bought with Ross Appleton, Jeremy Wilson and Ben Jarrett in 2016. The property was once known as Lambert Estate, and the Contentious crew offer a unique tasting experience where you can compare the wines they’re making today with what they call their Founder’s Museum and Founder’s Reserve collection – aged wines made by the previous owners that date back as far as 2001. “The aim is to spark a debate and a conversation about the different styles, with no right or wrong answers,” Mansfield says.
contentiouscharacter.com.au

Flights to Canberra operate daily from all main centres. Alternatively the drive from Sydney to Canberra is 3½ hours.

Home Videos The WORLD of WINE – Wine News. Cheap wine, tasting notes and cooking with wine The World of Wine – May 2021 … END_OF_DOCUMENT_TOKEN_TO_BE_REPLACED

How to visit Napa Valley on a Budget. In this video Carson and I explain a few ways to enjoy Napa on the cheap. Tip and advice about how to visit Napa … END_OF_DOCUMENT_TOKEN_TO_BE_REPLACED

Home Videos Get To Know Argentina Wine | Wine Folly If you love Malbec, Argentina is your ultimate wine region. But that’s not … END_OF_DOCUMENT_TOKEN_TO_BE_REPLACED