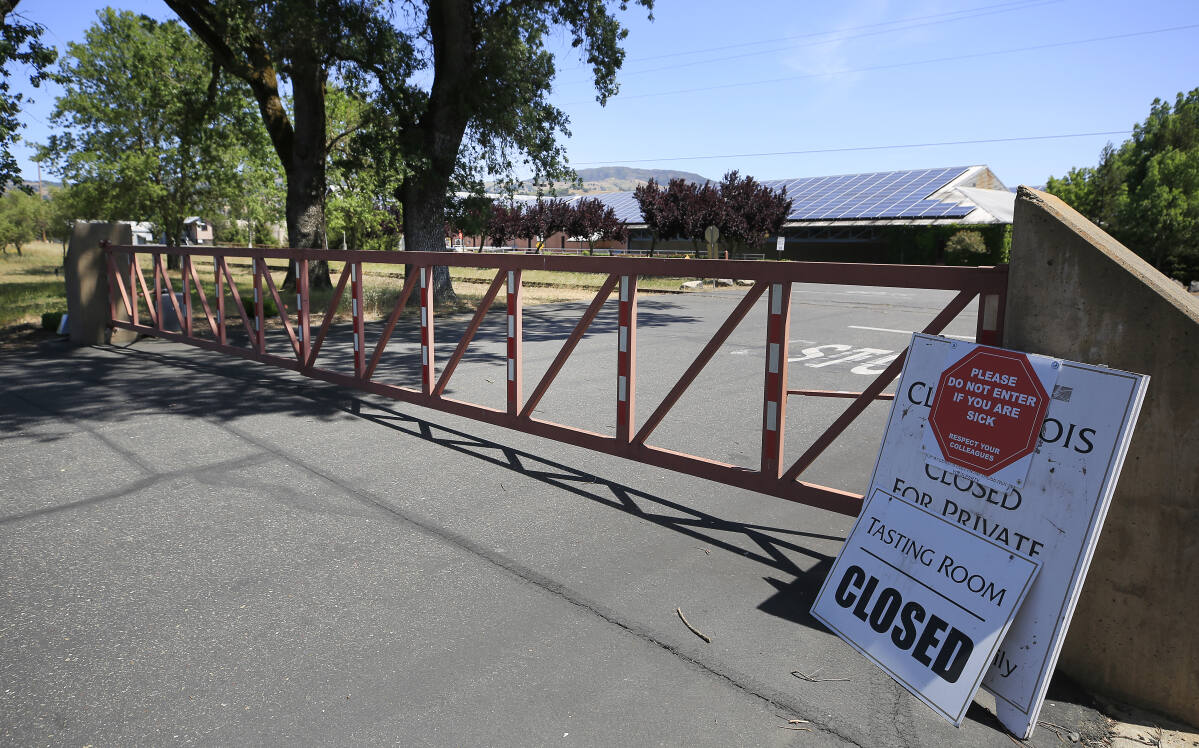 The news Thursday that U.S. wine giant E. & J. Gallo Winery laid off most workers at its Clos du Bois winery in Geyserville as part of a production shift of the low-budget wine from there to other area Gallo properties was unsurprising to George Rose, a key player during the storied winery’s heyday.

Rose, public relations director at Clos du Bois when the Geyserville winery helped put the Sonoma County wine sector on the international map, knew the brand had lost its luster.

Four different corporate owners took a premium label noted for its premium merlot lauded by critics like Jancis Robinson, the global renowned British wine journalist who writes a weekly column for the Financial Times, and reduced it to a cheap wine selling for less than $10 a bottle.

“This was the homegrown Sonoma County brand that truly had a place and actually for a time challenged Kendall-Jackson in the marketplace,” said Rose who worked for Clos du Bois from 1998 to 2003. The winery was founded in 1974 by Frank Woods and former Secretary of the Air Force Tom Reed and for a time it hosted the Sonoma County Wine Auction.

“We all have an incredible romance about wine. … At the end of the day, it’s a business,” Rose said.

Indeed, the business changes at Clos du Bois were expected, industry analysts said, after it was part of an $810 million blockbuster deal between Constellation Brands Inc. and Gallo. Constellation Brands sold 30 wine brands and five wineries to Gallo in one of the biggest transactions in the history of the industry. The sale, which was scaled back to appease regulators, was finalized in January after it was originally announced more than two years ago.

Lon Gallagher, a Gallo spokesman, declined to comment Monday on the specifics of the job cuts at Clos du Bois. In a statement last week, he said “changing market dynamics over the past two years” led to shifting production from Clos du Bois to other area Gallo winemaking sites.

“They (Gallo) have incredibly strong production assets,” said Robert Nicholson, president of International Wine Associates, a boutique advisory firm in Healdsburg for mergers and acquisitions in the wine and liquor industries.

Wine production shifting is common. For example, Foley Family Wines in Sonoma moved some winemaking from local wineries to its larger Ferrari-Carano Vineyards and Winery plant in Healdsburg that it bought last June.

The fate of Clos du Bois’s Geyserville winery seems similar to Ravenswood Winery in Sonoma, also part of the Gallo-Constellation deal. Ravenswood was founded by Joel Peterson in 1976 and made its mark with premium zinfandel. Its popularity faded in recent years. Constellation closed the Ravenswood tasting room two years ago and the winemaking site is now operated by Harlow Cellars. Gallo owns the brand rights to Ravenswood.

Clos du Bois also got away from sourcing grapes from select vineyards on its own estate in Sonoma County, Rose said. Instead, while the winery kept its bottle prices affordable, it bought less expensive grapes from across the state to make wine and put the less desirable “California” appellation on its bottle label.

“They couldn’t afford to source the fruit as Sonoma,” said Mario Zepponi, principal of Zepponi & Co., a merger and acquisition advisory firm in Santa Rosa. “It made it less important to have a Sonoma facility.”

The question now is can Gallo, the largest family-owned winery in the United States, revive the Clos du Bois brand?

Gallo’s Gallagher Monday released another statement, but wouldn’t elaborate on it.

Clos du Bois wines will continue to be produced at Gallo wineries in Sonoma County, according to the statement.

“Maintaining or improving the quality that consumers have come to know and trust is important to us,” Gallagher said in the statement.

Meanwhile, Zepponi said that other local wineries have notched turnarounds. Jean-Charles Boisset did helped revitalize DeLoach Vineyards in the Russian River Valley, Raymond Vineyards in the Napa Valley and Buena Vista Winery in Sonoma — though those are all premium brands.

“That’s a pretty good one point to,” Zepponi said of Boisset and his success reviving wineries. “It’s doable.”

Nicholson of International Wine Associates noted that Gallo’s vast resources makes it the best option to give Clos du Bois a lift.

You can reach Staff Writer Bill Swindell at 707-521-5223 or bill.swindell@pressdemocrat.com. On Twitter @BillSwindell.

Home Videos The WORLD of WINE – Wine News. Cheap wine, tasting notes and cooking with wine The World of Wine – May 2021 … END_OF_DOCUMENT_TOKEN_TO_BE_REPLACED

How to visit Napa Valley on a Budget. In this video Carson and I explain a few ways to enjoy Napa on the cheap. Tip and advice about how to visit Napa … END_OF_DOCUMENT_TOKEN_TO_BE_REPLACED

Home Videos Get To Know Argentina Wine | Wine Folly If you love Malbec, Argentina is your ultimate wine region. But that’s not … END_OF_DOCUMENT_TOKEN_TO_BE_REPLACED