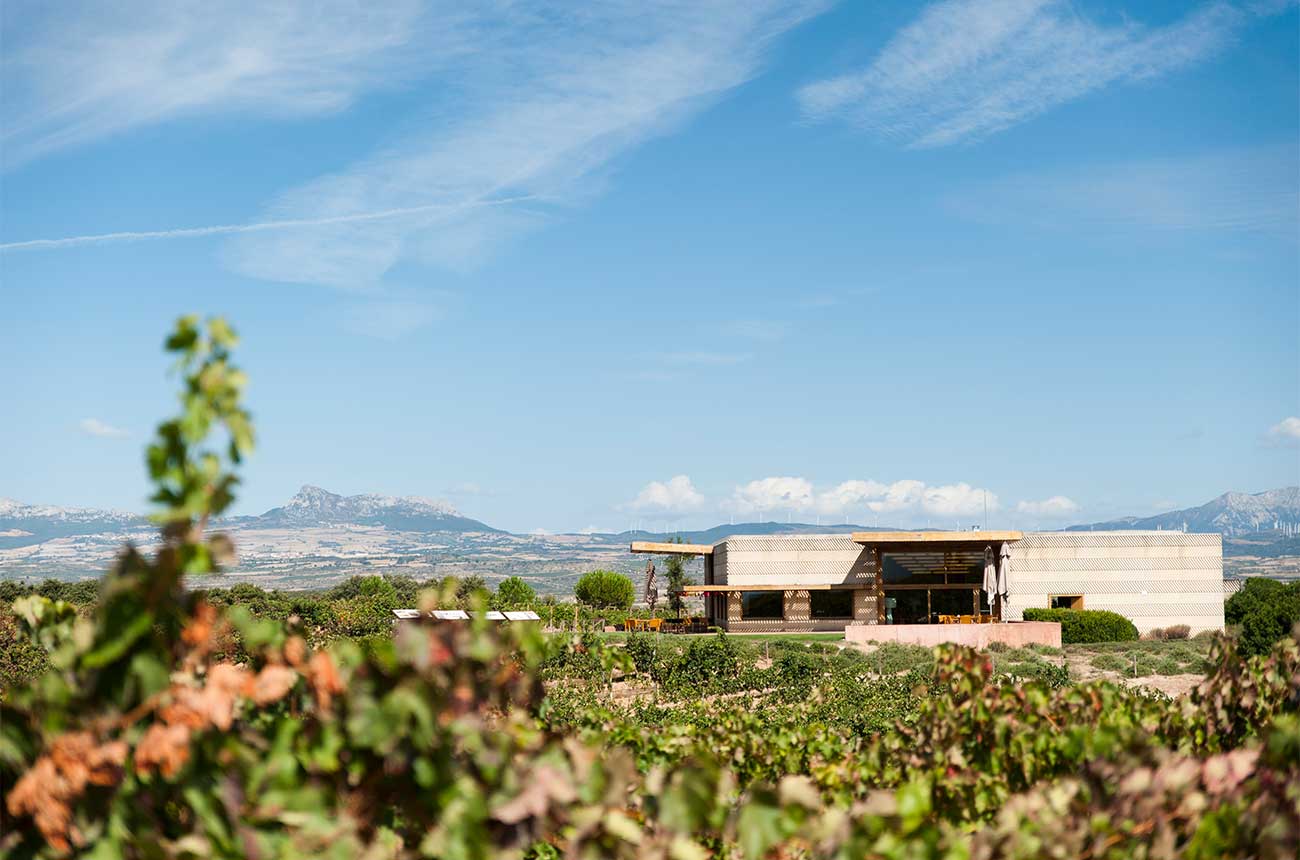 Arriving at Campo Viejo’s winery in Rioja is like visiting an art gallery, a wine bar, and a farm all at the same time. After driving through the illuminated archway at the gate, rows of vines guide visitors towards a winery that peeps out from beneath the hillside, with a colourful sculpture catching the eye.

Yet there is much more to discover behind the scenes. Campo Viejo leads innovation in Rioja and is committed to sustainable winemaking, carrying out experiments with grape varieties and production techniques that ensure it creates a contemporary and expressive wine style relevant for consumers, while caring for its land and adapting to challenges such as climate change.

The fact that the winery is pleasing to the eye as well as to the environment is no accident. Chief winemaker Elena Adell recalls one of the final design meetings for the new site, which opened in 2001.

‘We were talking about “sustainability” back when no one else was using that word,’ she says. ‘We achieved all our objectives around functionality, safety, and sustainability, while still making the winery look pretty – I felt so proud the first time I saw the finished winery, and I still do today.’

Sustainability built-in from the start

Building the winery into the hillside keeps it naturally cooler in the summer and warmer in the winter, cutting its heating and cooling costs. Gravity is used instead of pumps, while renewable electricity provides power instead of fossil fuels.

As the winery celebrates its 20th anniversary, sustainability continues to be a key focus, including through saving water. Campo Viejo needs only 0.77 litres of water to make each bottle of wine, compared with the Spanish average of 2.25 litres. Meanwhile, cutting 160g from the weight of each bottle triggered a 30% drop in the brand’s carbon footprint.

These measures are part of the winemaking team’s commitment to both the land and the pursuit of quality. The latter has been recognised in many competitions worldwide, including in Berlin, Frankfurt, New York and San Francisco.

In 2007, the Rioja control board allowed a raft of new varieties to be used in the region, including: native white grapes Maturana Blanca, Tempranillo Blanco and Turruntés; the more exotic white trio of Chardonnay, Sauvignon Blanc and Verdejo; and native red varietal Maturana Tinta.

Adell and her team were quick to begin investigating the new options. They even opened an experimental winery on their site in 2013, so they could learn how different grapes grown in different terroirs could be expressed in the aromas, flavours, and textures of the resulting wines.

‘It’s like a winery within a winery,’ explains Adell. ‘It’s where we can play around and be creative and expressive, and then take the results into the main winery.’

Campo Viejo planted experimental vineyards at one site in the Rioja Alta sub-region, and two in the Rioja Oriental area, one at 400m above sea level and the other at a dizzy 800m, so they could learn how the vines developed in contrasting terroirs. One of the highest-profile results of those experiments is Campo Viejo Blanco, the winery’s white wine, which brings together Tempranillo Blanco with Viura.

Small quantities of its experimental wines are even bottled and sold at its winery. ‘That’s great because we get immediate feedback from customers,’ Adell adds. ‘I spend so much time behind the scenes making the wines – like a chef in a kitchen – so it’s fun to talk to our customers about our wines and tell stories from the vineyards and the winery that explain why they taste like they do.’

The experts in Rioja

Like all the world’s grape-growing regions, Rioja faces a changing climate; warmer summers will mean more sugar and less acid in the grapes, and therefore higher levels of alcohol and less freshness in the resulting wines. Campo Viejo is using its innovative mindset to adapt, including changing harvest dates when necessary.

Back in the winery, Adell is also finding ways to retain the vibrant and expressive aromas and tastes that have won global legions of fans. ‘We experimented with using carbonic maceration for the Tempranillo Blanco, because we knew it had worked so well for the red Tempranillo,’ she says. She is also testing yeasts that could help keep the alcohol low while retaining vibrancy.

Adell is pragmatic about the effects of climate change on Rioja. ‘We can’t just lift the whole 65,000ha of the region two or three metres higher up the hillside, so we have to adapt,’ she explains. ‘We cannot change the grape varieties we use in Rioja because they are the soul of the region, but we are studying whether different clones could be better suited to climate change.’

The winery is also collaborating with partners, including with the University of La Rioja on acids that could help wines retain their freshness as the climate changes. ‘In winemaking, two plus two never equals four – I like that uncertainty and the innovation it brings,’ adds Adell.

Home Videos The WORLD of WINE – Wine News. Cheap wine, tasting notes and cooking with wine The World of Wine – May 2021 … END_OF_DOCUMENT_TOKEN_TO_BE_REPLACED

How to visit Napa Valley on a Budget. In this video Carson and I explain a few ways to enjoy Napa on the cheap. Tip and advice about how to visit Napa … END_OF_DOCUMENT_TOKEN_TO_BE_REPLACED

Home Videos Get To Know Argentina Wine | Wine Folly If you love Malbec, Argentina is your ultimate wine region. But that’s not … END_OF_DOCUMENT_TOKEN_TO_BE_REPLACED