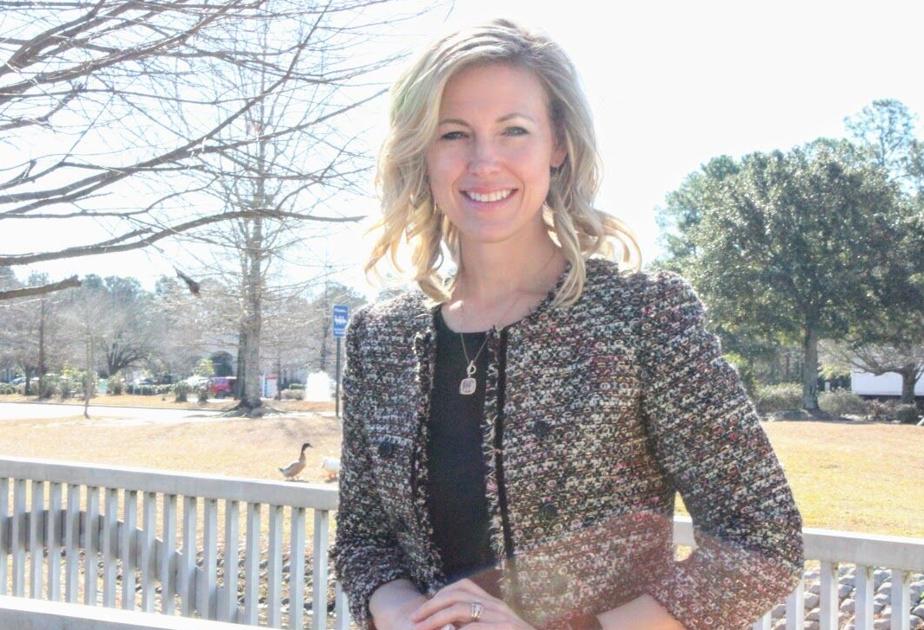 Carrie Calvin is a founder or board member of seven civic or charitable organizations in St. Tammany, but the position that she holds most dear is that of co-president and chief operating officer of her family.

“If there is one thing I’ve learned through the pandemic, it is how important it is to put family first, to share how grateful we are for our blessings with each other, and to bring my kids the example of why we share with our community,” said Calvin.

“I know my kids will be involved in their communities — I’m not sure how, but I’m sure that they will.”

Calvin, 42, was born in Slidell but spent her growing up years outside of Chicago. She decided to return home after high school to attend Southeastern Louisiana University, where she met her husband, Eric. They live in Slidell with their daughters Cayenne, 10, and Cypress, 8.

Calvin has modeled for her girls a passion for impacting her community through her work with The Slidell Rotary Club; in founding the Prayer for Peacemakers annual event and the Friends of the Slidell Police; through work with the Northshore Harbor Center; the Steel Mimosas women’s networking and philanthropy organization; and the Leadership North Shore program, all in less than seven years.

Her ambitious outlook received a kick-start when a grade-school teacher called her average and told her she would never excel. “I was devastated, but when I told my dad he said, ‘Well are you only average?’ I answered emphatically ‘No’ and he told me to go out there and prove it.”

That teacher unknowingly lit a fire in Calvin. As a student, she set her sights on achieving the honor roll and later, the university dean’s list even when reading comprehension was a challenge.

“I learned how to study, and often that meant reading and rereading information. I pulled all-nighters with iced coffee and chocolate-covered espresso beans, whatever it took.”

Her aptitude for numbers led her to a career in accounting, where she also held herself to the highest standards. She is the audit director at Bourgeois Bennett CPAs and Consultants, where two years ago, she became one of the youngest women to be named partner.

Calvin has also never been afraid to get creative in order to achieve results, whether that meant designing a multicolored resume as a fledgling job applicant or trying her hand at producing a slideshow-style video as part of her Praying for Peacemakers event. “I am not your typical accountant,” she joked.

That 2017 video featured nearly 300 members of the law enforcement community in St. Tammany. She created it as a follow-up to the 2016 inaugural Praying for Peacemakers, a prayer vigil for police and other law enforcement officers in the wake of an attack on police officers in Dallas.

“That first event grabbed national attention. In nine days, it went from having 20 people attending to drawing thousands. It was incredible,” she said.

Calvin is founder and president of the Friends of the Slidell Police Foundation which supports the department in dozens of ways from helping hospitalized officers with medical bills and retired K-9 officers with veterinarian visits to purchasing software equipment and assisting with the stall fees for the horses of mounted officers.

The organization also helped to showcase for the community the softer side of police officers, Calvin said, when it sponsored the pink police car fundraiser for the cancer center at Slidell Memorial Hospital.

The fundraiser raised more than $40,000 last October by allowing Slidell citizens to sign the car for a donation to the hospital. In the process, residents viewed police officers in a different light, she said.

“Having police officers out there meeting the community allowed everyone to see that they are human; they are fathers and mothers. They leave their families to protect all of us,” she said.

Calvin’s current projects include planning the Blue Line Bash fundraiser for the Friends of the Slidell Police and the Rotary Heritage Fest, both to be held in July.

But her first experience working with a community organization came seven years ago, upon the suggestion of her church pastor, Donald Bryan of the First Pentecostal Church of Slidell. She said he encouraged her to join the Rotary Club of Slidell Northshore. Calvin said she agreed because of the Rotary Club’s “service above self” motto and the group’s original mission to fight polio, which afflicted her father throughout his life.

She ended up serving the chapter as president, and her work with the Rotary Club led to an invitation to join the Leadership Northshore program for St. Tammany’s emerging leaders. “I just fell in love with our community and wanted to keep giving back and making an impact,” she said.

In 2019, she extended her reach into community service by founding the Steel Mimosas women’s group, which meets quarterly to network and support nonprofits close to the hearts of its 130 members. The group raised $60,000 for their supported organizations in its first year.

During the COVID-19 shut down, the group continued to meet via Zoom for events such as wine-tasting and cooking classes and have focused on putting the spotlight on nonprofits throughout the parish that are struggling, she said.

Calvin said the Steel Mimosas have shown her the way that like-minded women can “make impactful waves throughout the community,” she said.

“It’s also important that women lift each other up. If you know that you are part of something where you are supported, you will be at your best. The Steel Mimosas is about women working together and bringing out the best in everyone.”

Calvin said she’s been applying that message at home as well, carving out focused time for family and sharing with her girls daily all that she is thankful for.

She said during quarantine, the family began a routine of gathering together early in the mornings. That ritual has continued and during chilly winter mornings, the family has enjoyed starting their days around a cozy fire, she said. “That snuggle time with my kids is one of the most important things that I do,” Calvin said.

She said they share what they are all grateful for, and Calvin often expresses to the girls why she spends time helping others in the community. She said when she sees the girls putting aside old toys to donate or ministering to younger children, she knows she has made an impact.

“I know that my kids are going to be active in giving back to their own communities,” she said. “I don’t know exactly how, but I know they will be involved.”

Home Videos The WORLD of WINE – Wine News. Cheap wine, tasting notes and cooking with wine The World of Wine – May 2021 … END_OF_DOCUMENT_TOKEN_TO_BE_REPLACED

How to visit Napa Valley on a Budget. In this video Carson and I explain a few ways to enjoy Napa on the cheap. Tip and advice about how to visit Napa … END_OF_DOCUMENT_TOKEN_TO_BE_REPLACED

Home Videos Get To Know Argentina Wine | Wine Folly If you love Malbec, Argentina is your ultimate wine region. But that’s not … END_OF_DOCUMENT_TOKEN_TO_BE_REPLACED