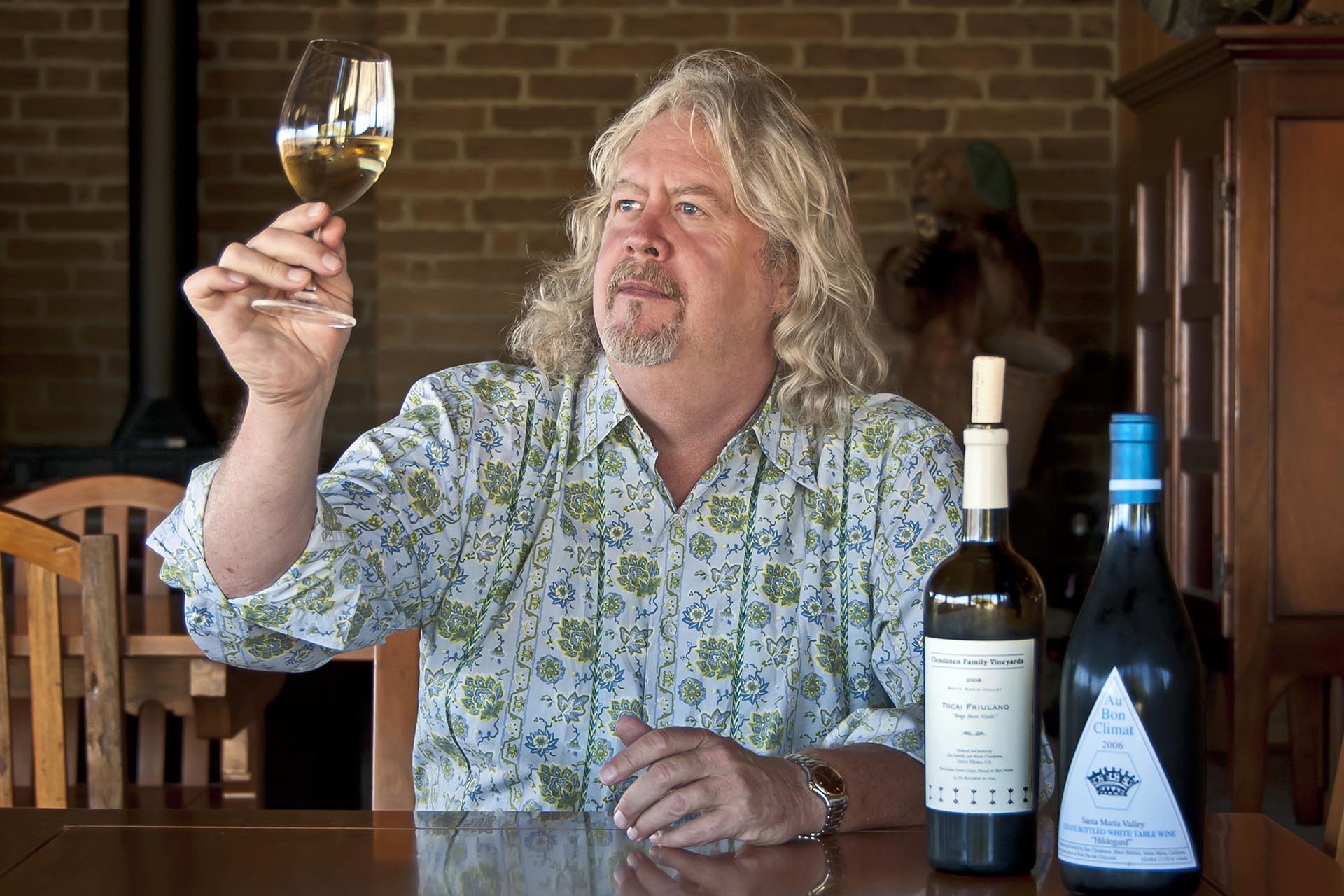 In an industry loaded with gregarious personalities, winemaker Jim Clendenen, who died on May 15 at 68 years old, was cut from even more colorful cloth.

With a flowing mane of wild hair, intense eyes and fierce confidence, Clendenen, the owner of Au Bon Climat winery, spent his entire career promoting the wines of Santa Barbara County around the world. He proved that Pinot Noir and Chardonnay could be made in a leaner, Burgundian style despite abundant California sunshine, and mentored generations of winemakers-to-be.

He’s also remembered as a great father to his two children, a dear friend to dozens and a bon vivant who cooked and hosted long, leisurely lunches at his Santa Maria Valley winery whenever he wasn’t on the road.

“I have a good lifestyle, and I’ve been able to buy real estate, but every dollar I’ve earned in my life I earned in the wine business—not many people can say that,” Clendenen told me last year. He was honored to be among the few who could grow and self-sustain a small wine company. “It’s been a great trip,” he said.

Raised in Southern California, Clendenen came north in 1971 to attend University of California, Santa Barbara, where he considered being a lawyer. But he found work with the region’s emerging wine industry, and toiled in the cellar at Zaca Mesa Winery in the Santa Ynez Valley for a couple of years. Recurrent trips to Europe, particularly working harvests in Burgundy, inspired Clendenen to cofound Au Bon Climat with his friend Adam Tolmach in 1982.

Clendenen was moved by the egalitarian nature of Burgundy compared to other regions of the world, and wanted to make wines in the older ways, with lower sugars, higher acid and less new oak. Critics applauded the effort, naming the winery one of the best in the world by 1990.

“As an individual, I think he probably did more to put Santa Barbara County, Santa Maria Valley and Bien Nacido Vineyards on the map globally than anyone else I can think of.” —Nicholas Miller

In 1989, Tolmach left the partnership and Clendenen moved into a new facility on Bien Nacido Vineyards, sharing space with another friend, winemaker Bob Lindquist. They’ve been in the same facility ever since.

Lindquist was shocked by the news of Clendenen’s passing. He toasted his friend at a winery lunch on Monday, raiding the cellar to find gems going all the way back to a 1986 Pinot Noir.

“He’ll be remembered for putting Santa Barbara on the map,” says Lindquist, who started working with Clendenen back in 1979 and was encouraged by him to start his Syrah-focused brand, Qupe, in 1982. “A lot of people can make that claim, like Richard Sanford or Brooks Firestone, but nobody did more to promote Santa Barbara internationally than Jim did.”

Clendenen was also integral to elevating the reputation of Bien Nacido Vineyards, now considered the most site-designated vineyard in the world.

“Certainly for my own family, we owe so much of our own success in the wine world to the force of nature that is Jim Clendenen,” says Nicholas Miller, whose family planted Bien Nacido nearly 50 years ago. “As an individual, I think he probably did more to put Santa Barbara County, Santa Maria Valley and Bien Nacido Vineyards on the map globally than anyone else I can think of. He was a mentor to anyone in the industry who met him as everyone was pulled into his gravitational pull.”

Clendenen inspired the wine projects of sommeliers like Paul Lato, Joshua Klapper and Rajat Parr, who said that his “big brother…showed me the way in life.”

Clendenen also inspired his now-ex-wife, Morgan Clendenen, to start her brand Cold Heaven; his niece, Marisa Clendenen Matela, to go into winemaking; and countless other members of the next generation, including Marc Piro, Michael Brughelli and Gavin Chanin, who started making wine with Clendenen when he was barely of legal age.

“Jim presented us to the world, while he brought the world to us, and he explained it to everyone all along the way.” —Frank Ostini

Frank Ostini, who owns the Hitching Post II restaurant and co-owns Harley-Ostini Hitching Post Wines, started making his wine at Clendenen’s facility in 1991. The two were already great friends, bonding over cooking as much as wine.

“Jim was a dear friend whose influence on us and Santa Barbara wine can never be overstated,” says Ostini. “Jim presented us to the world, while he brought the world to us, and he explained it to everyone all along the way.”

Clendenen also thrived as a father to his son, Know Alexander Clendenen, and daughter, Isabelle Clendenen, who started working at the winery in branding a few years ago.

“My father was a very generous, bright and candid man,” she says. “He was an icon to many, but most importantly, he was a very caring father. He made sure my brother and I wanted for nothing. His loss affects so many, but his impact will never be lost to any of us. It means a lot to me that he was celebrated and loved by so many.”

Home Videos The WORLD of WINE – Wine News. Cheap wine, tasting notes and cooking with wine The World of Wine – May 2021 … END_OF_DOCUMENT_TOKEN_TO_BE_REPLACED

How to visit Napa Valley on a Budget. In this video Carson and I explain a few ways to enjoy Napa on the cheap. Tip and advice about how to visit Napa … END_OF_DOCUMENT_TOKEN_TO_BE_REPLACED

Home Videos Get To Know Argentina Wine | Wine Folly If you love Malbec, Argentina is your ultimate wine region. But that’s not … END_OF_DOCUMENT_TOKEN_TO_BE_REPLACED