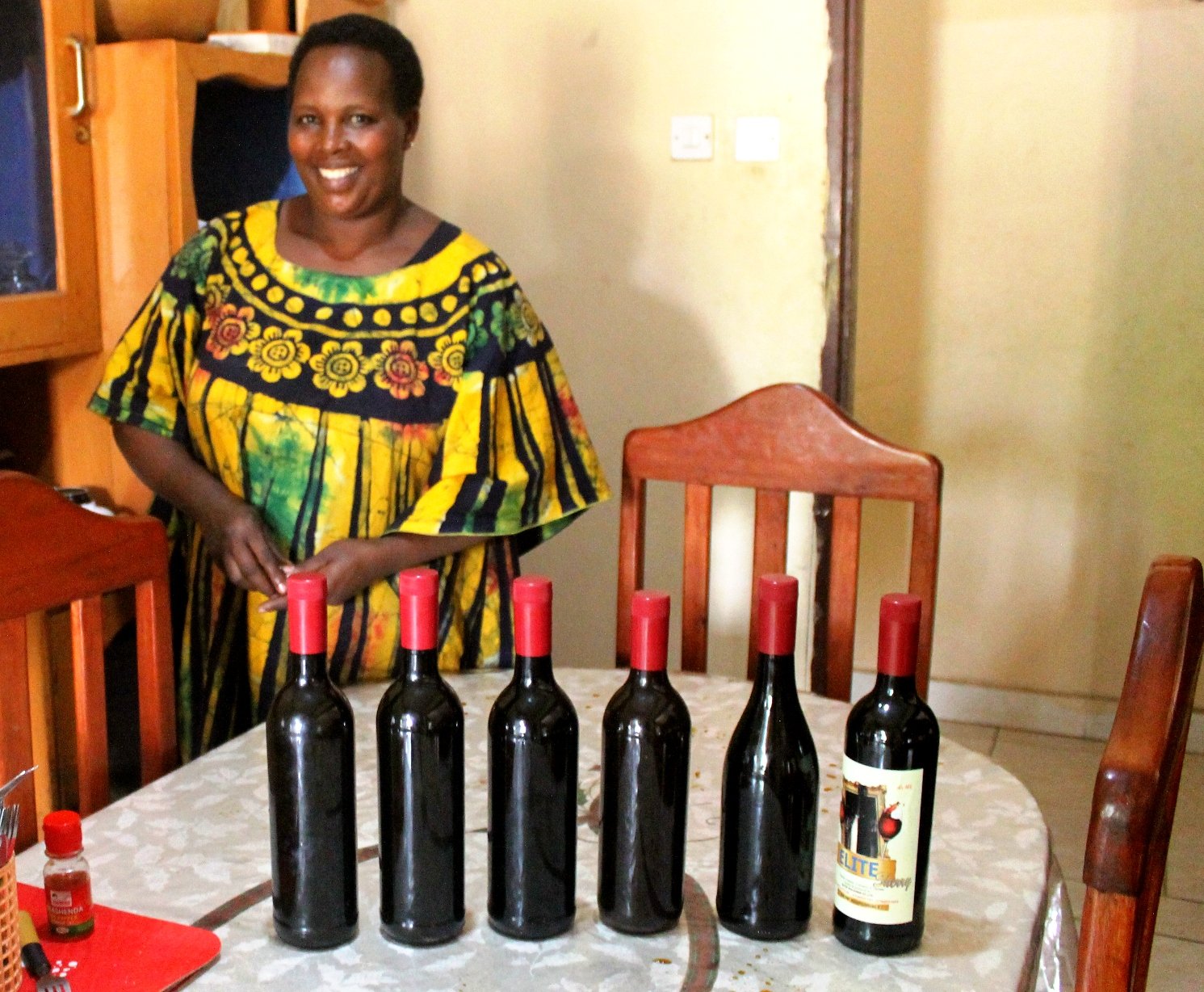 Whenever there is a bumper harvest, the price of matooke reduces to as low as Shs1,000. During such seasons, farmers reap too little from huge banana plantations that require labour and some good money to set up.

It is this frustration that drove Devota Byaruhanga, 46, a resident of Bulyanyenje village, Central Division Fort Portal City to venture into making wine.

In 2017, she decided to stop selling her bunches of matooke cheaply and started adding value to them by making wine.

But as a novice, she needed to learn the process of making wine.

“When my uncle came and visited us, he came with wine and it was sweet. I asked him more about how wine is prepared and he told me it was made out of matooke,” Byaruhanga recounts.

She says she started marketing her uncle’s wine in her village, especially at parties and her uncle became a big supplier of wine.

Armed with a budding passion, Byaruhanga spent time at her uncle’s homelearning how to make wine. Byaruhanga says she was given a document on the whole process and her husband gave her startup capital of Shs1m, which she used to buy materials.

To overcome that, in 2018 she decided to visit another wine producer in Mbarara for more knowledge and when she came back she had mastered all the processes.

She has now turned one of the rooms in the home into a store where she now has more than 30 jerricans ready for sale.

She says for one to venture into this business, jerricans, matooke, citric acid, sodium, sugar and bottles for packing are required.

But she is quick to note that even with all these materials, one requires patience and hardwork to thrive in this business because the process sometimes takes about 12 months.

Byaruhanga says she uses rudimentary means of making wine which makes the process longer and tedious.

“I use my hands and also getting daily customers is still challenge, before covid-19 I had picked market because many people had started making orders. Today, the sales are low,” says Byaruhanga

Her customers are people who organise weddings, introduction ceremonies and people within her community.

Byaruhanga says she sells each bottle of wine at Shs10,000 while a 20- litre jerrican is sold at Shs150,000.  Before Covid-19 hit, when parties were many, she used to sell two jerricans every fortnight.

She has joined many saving groups and together with her husband, they have constructed rental houses from the wine business, started a piggery project, bought cows and paid fees for children.

Although the sales are currently low, Byaruhanga says she cannot fail to sell a bottle of wine a day.

She plans to expand her business by procuring machines to produce more wine and supply to shops and supermarkets in Fort Portal City. She also wants to build a wine factory.

Just like other wines, the more the banana wine ages, the better it gets. Once it ages well, you get a crystal clear, golden liquid with all finesse. Byaruhanga advises that it is better to keep wine in a dark place as it ages.

Home Videos The WORLD of WINE – Wine News. Cheap wine, tasting notes and cooking with wine The World of Wine – May 2021 … END_OF_DOCUMENT_TOKEN_TO_BE_REPLACED

How to visit Napa Valley on a Budget. In this video Carson and I explain a few ways to enjoy Napa on the cheap. Tip and advice about how to visit Napa … END_OF_DOCUMENT_TOKEN_TO_BE_REPLACED

Home Videos Get To Know Argentina Wine | Wine Folly If you love Malbec, Argentina is your ultimate wine region. But that’s not … END_OF_DOCUMENT_TOKEN_TO_BE_REPLACED