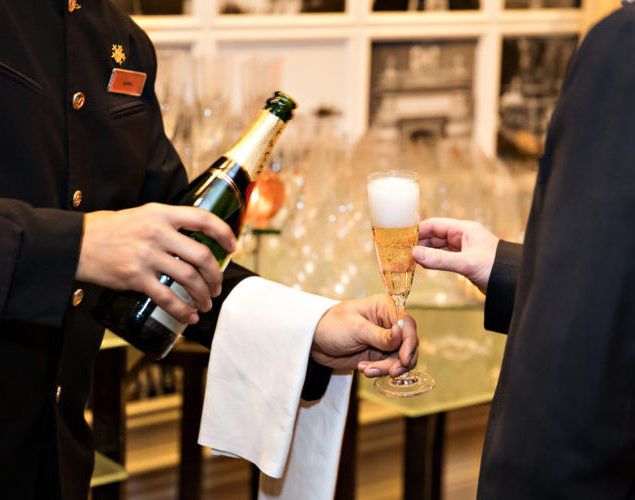 Chef Bruce and Boston Harbor Hotel have invited renowned winemakers from around the world to Boston for this one-of-a-kind celebration of food and wine. The festival is the nation’s longest running wine and food pairing series and kicks off on Friday, January 12, and continues through Saturday, March 27.

Attendees can choose from numerous dinners to learn more about the winemaking process and the festival’s popular themed events including the Battle of the Cabernets, Meritage Madness, and Old World/New World Pinot.

“The series will feature twenty-two events taking place in the Meritage event space with some of our favorite returning wineries and new additions, including Doubleback and Batasiolo. Joseph Drouhin, Frog’s Leap, Grgich, Zenato, and Ramey who are just a few of many exceptional wineries we will be welcoming back to the Boston Harbor,” says Boston Harbor Hotel’s Daniel Bruce.

Amid the pandemic, the hotel has modified many protocols during this year’s festival, like reduced seating capacities and only seating parties within their own groups.

Dinners will be sold by table, for groups of two, four, or six. Tickets are available for purchase at bostonwinefestival.net.

Battle of the Cabs, Friday, January 15 & Saturday, January 16. $265
The festival’s most coveted themed dinner continues. The Battle of the Cabernets series showcases Napa Valley’s stars, while a distinguished panel of cabernet experts leads diners through a blind tasting.

Old World, New World Pinot Noir, Friday, January 22. $195
Long-time festival friend, host, and wine expert Howie Rubin returns to host an evening featuring one of the world’s most renowned grape varietals: Pinot Noir. The night will feature many well-known pinot noirs from Europe and South Africa in a side-by-side comparison with their California and Oregon counterparts.

Meritage Madness, Saturday, January 23. $275
Taste many different vintages of these Bordeaux-style wines from Napa Valley. Participants can taste contrasting styles, hear commentary from the panel of wine professionals, and vote on their favorite Meritage of the night.

Chateaunuef-du- Pape, Friday, January 29 & Saturday, January 30. $185
The festival presents a selection of wines from one of the world’s most valued wine regions, Châteauneuf-du-Pape. This is an exclusive collection of high-quality, small, family-owned estates. Chef Bruce will create a meal influenced by the culture and heritage of this special region.

Far Niente, Friday, February 5. $195
Far Niente, located in Napa Valley, was founded in 1885 by John Benson, a forty-niner of the California gold rush and uncle of the famous North Shore impressionist painter, Winslow Homer. In 1979, Gil Nickel purchased the winery. Today, almost 40 years later, Far Niente has expanded their offerings to include not only their renowned chardonnay, cabernet, and dolce, but also their EnRoute winery, which produces Russian River pinot noir. The evening will begin with a seminar focusing on their single-vineyard designated wine, Nickel & Nickel cabernet. Dinner will follow.

Elk Cove, Saturday, February 6. $175
Elk Cove, family-owned and -operated and making wine since 1977, is one of Oregon’s oldest wineries. Adam Godlee Campbell, winemaker and owner, will return to celebrate his newest vintages, along with a library selection of his pinot trilogy: noir, gris, and blanc.

Doubleback, Friday, February 19. $195
Drew Bledsoe, legendary quarterback for the Patriots, founded Doubleback in 2008 in Walla Walla, Washington where he grew up. He focuses on producing world class sustainably grown cabernet with elegance and balance. Meet Bledsoe and sample his Northwest wines.

Zenato, Saturday, February 20. $185
Founded in 1960, the Zenato family has set the bar on how great Italian wine can taste. Second generation Nadia and Alberto Zenato continue the commitment to producing these outstanding wines with enthusiasm, tenacity, and dedication. Experience a guided tour through Italy’s Lake Garda and Valpolicella Classico region, hosted by Vittorio Marianecci from the winery.

Joseph Drouhin, Friday, February 26. $205
Joseph Drouhin is one of the largest domaines in Burgundy and owns land throughout the region. Laurent Drouhin, one of four grandchildren who runs the winery today, will narrate this evening’s seminar and dinner with the full array of their wines, including special past vintages.

Frogs Leap, Saturday, February 27. $185
John Williams founded Frog’s Leap in 1981 with a commitment to sustainable and organic farming. His wines are considered some of the most age-worthy in Napa. Williams presents a remarkable lineup of wines with selected vintages from the past three decades of zinfandel, merlot, and cabernet.

Grgich Hills Estate, Friday, March 5. $185
Nestled in the heart of Napa Valley and founded by legendary winemaker Miljenko “Mike” Grgich, this winery is among the most recognized in Califor­nia. Mike’s daughter, Violet Grgich, returns to celebrate their 40th anniversary and showcase their richly textured and understated wines, from classic Napa chardonnays, zinfandels and cabernets to the vineyard’s dessert wine, Violetta.

Batasiolo, Saturday, March 6. $185
Batasiolo is located in the Langhe district of Piedmont, and produces wines from nine estate vineyards. Their focus on Nebbiolo di Barolo grape produces some of the top Barolos in the region. Join Ricardo March, who leads diners through an array of wines from this highly recognized winery, while Chef Bruce creates a memorable meal featuring some of the ingredients from this unique region.

St. Supery is the largest family-owned, sustainably produced estate in Napa Valley. They are committed to sustain­ability and land stewardship. CEO Emma Swain will host this dinner and present a fabulous collection of their elegant wines highlighted by their Elu and Virtu blends.

Robert Foley Vineyards, Saturday, March 13. $185
Acclaimed winemaker and accomplished musician Robert Foley was the founding winemaker at Pride Mountain Wines. In 1998, Bob and his wife, Kelly Kahoe, started their own boutique winery on Howell Mountain. They consistently produce highly regarded varietals ranging from lighter Rhone-style blends to their signature full-bodied reds. The evening will begin with a seminar, and dinner will follow.

Silver Oak, Saturday, March 20. $210
Since its founding in 1972, Silver Oak has pursuited a single wine with a style all its own: cabernet sauvignon. Winemaker Nate Weis leads diners through a dinner featuring several vintages of Silver Oak’s Alexander Valley and Napa Valley cabernets, as well as their newer venture Twomey Cellars with its pinot noirs and merlots.

Ramey Wine Cellars, Friday, March 26. $185-$215
David Ramey, legendary owner of Ramey Wine Cellars, is known for his big cabernet sauvignons and full-bodied chardonnays produced at his Healdsburg, California winery. The evening will start with an exciting seminar on the “age-ability” of chardonnay, followed by a meal perfectly paired with these delicately balanced wines.

Home Videos The WORLD of WINE – Wine News. Cheap wine, tasting notes and cooking with wine The World of Wine – May 2021 … END_OF_DOCUMENT_TOKEN_TO_BE_REPLACED

How to visit Napa Valley on a Budget. In this video Carson and I explain a few ways to enjoy Napa on the cheap. Tip and advice about how to visit Napa … END_OF_DOCUMENT_TOKEN_TO_BE_REPLACED

Home Videos Get To Know Argentina Wine | Wine Folly If you love Malbec, Argentina is your ultimate wine region. But that’s not … END_OF_DOCUMENT_TOKEN_TO_BE_REPLACED