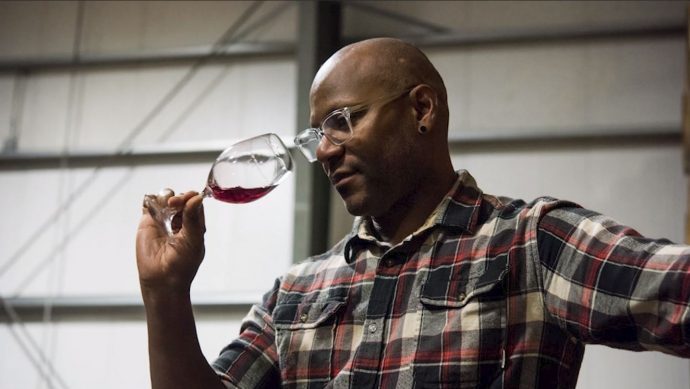 The New York sommelier’s wines are shipped around the world

PORTLAND, Ore. (KOIN) — Several African-Americans have made their way to the top of the wine-making world, including a New Yorker who has established perhaps the largest Black-owned wine brand in America. And his wines are made in Oregon.

André Hueston Mack of Maison Noir Wines is living his legacy: creating wines for the masses and leading the way for African-Americans in the wine industry.

“Everybody should enjoy wine. It’s not reserved for just the elite,” Mack said.

“I grew up on hip hop, skateboarding, punk rock and being able to put all those things — infuse them together — you know, makes it very enjoyable for me,” said Mack.

Mack was raised in Trenton, New Jersey, and eventually made his way into the world of finance at Citicorp. But he wasn’t satisfied.

“I became really immersed in wine and started studying and kind of worked very hard toward the title of being a sommelier,” said Mack. He said his love of wine was originally ignited by the TV sitcom “Frasier” and the character’s knowledge and appreciation of fine wine.

Mack became one of the top sommeliers in America, first at Chef Thomas Keller’s world-famous French Laundry restaurant in Napa Valley, then at Per Se in New York.

“And you know, just to have the audacity to quit one of the top five jobs in the world as a sommelier to say that I’m going to hop on the other side and start making wine — you know, a lot of people weren’t doing that,” said Mack.

“I think people are used to it now and there’s a lot more diversity,” Mack said. “We have a long way to go but the industry’s really opening up.”

André Mack’s New York state of wine extends all the way across the country. His wines are produced in Oregon’s Willamette Valley — an area regarded as one of America’s premier wine-making regions.

“Some of my favorite pinot noirs domestically came from the Willamette Valley in Oregon,” said Mack.

Mouton Noir, or “Black Sheep” wines started in 2007. Now named Maison Noir, or “Black House,” they are shipped to nearly every state and throughout the world and are especially popular in Sweden and Southeast Asia.

Mack’s wines — and shrewd use of social media — have drawn the attention of sports teams and major corporations including Cadillac and Microsoft. He’s an author and a self-taught graphic designer who started a streetwear company even before the debut of his wines. Mack owns a wine shop, a ham and charcuterie bar and a bakery — all near his home in Brooklyn.

Mack is focused on his current path.

“I’m just in a space where I want to build things and create stuff,” he said.

Home Videos The WORLD of WINE – Wine News. Cheap wine, tasting notes and cooking with wine The World of Wine – May 2021 … END_OF_DOCUMENT_TOKEN_TO_BE_REPLACED

How to visit Napa Valley on a Budget. In this video Carson and I explain a few ways to enjoy Napa on the cheap. Tip and advice about how to visit Napa … END_OF_DOCUMENT_TOKEN_TO_BE_REPLACED

Home Videos Get To Know Argentina Wine | Wine Folly If you love Malbec, Argentina is your ultimate wine region. But that’s not … END_OF_DOCUMENT_TOKEN_TO_BE_REPLACED