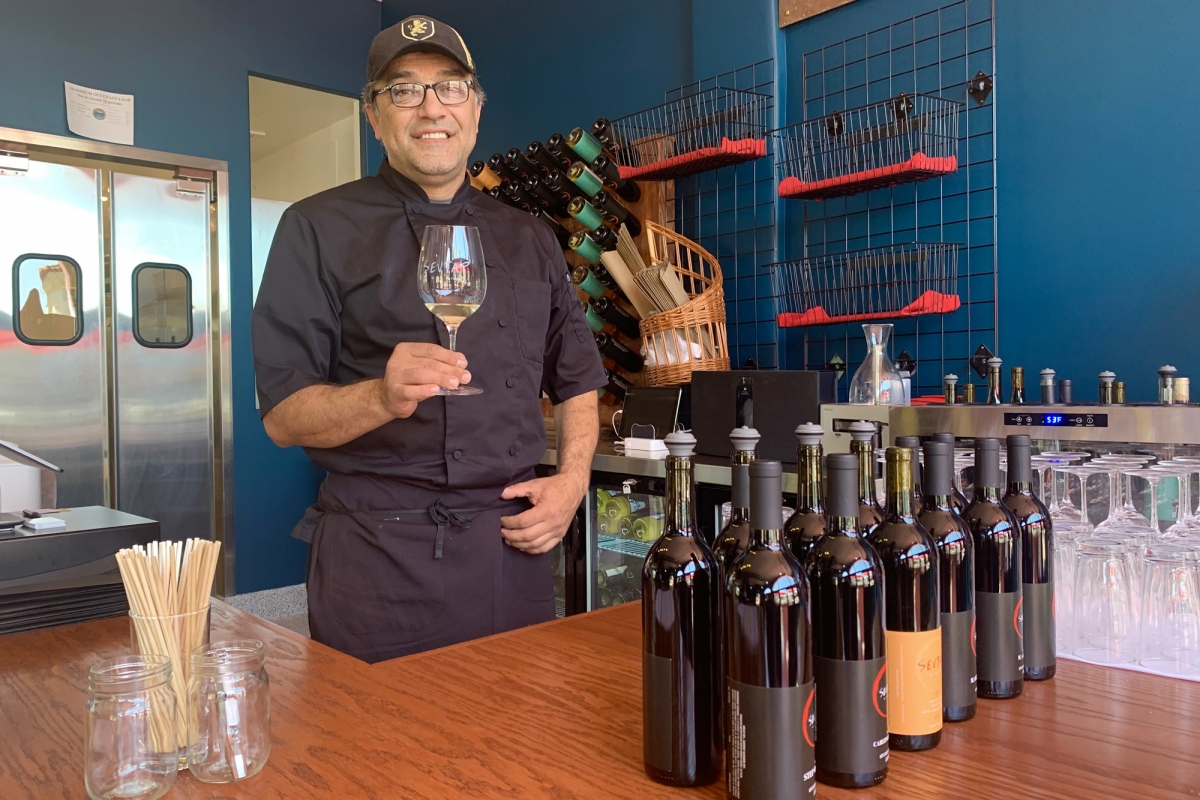 BizHawk is published weekly, and includes items of interest to the business community. Share your business news, including employee announcements and personnel moves, by emailing [email protected].

“This is a historical building,” Sevtap said Thursday afternoon. “It’s a phenomenal look.”

Sevtap said the location, next to the Lobero Theatre, will be ideal, particularly when the Lobero reopens to full events. When he was originally looking for a spot in Santa Barbara, he said he was skeptical.

“I was looking everywhere, but I didn’t think State Street was tasting rooms,” he said. “I thought it was more bar.”

Sevtap is a former chef and cooks the bread and the tapas. He said some are Spanish-style, others are Louisiana crab cakes.

“Because it’s Santa Barbara, I want to do a lot of seafood,” Sevtap said, adding that he has crab cakes, scampi and octopus.

Sevtap is originally from Turkey, where he specialized in deep-sea diving. In the United States, he wanted to work on oil rigs and platforms.

He first came to Los Angeles and wanted to learn English. He met a guy at the bus station who encouraged him to move to Isla Vista. He learned that Santa Barbara City College had a diving program that was far less expensive than the commercial one to which he was originally interested in applying.

He worked at various wineries and kitchens around the country before finally landing a job giving wine tours in Santa Barbara.

One of his jobs was at Kalyra Winery in Santa Ynez. He asked, and they eventually let him make his own wine. He made one barrel a year and sold it to buyers.

At the same time, he worked as a taxi cab driver for about a year, selling his bottles of wine to restaurants in the Santa Ynez Valley. Eventually, he decided to open his own winery in Buellton, moved to Solvang and now is in Santa Barbara.

“We have wonderful outdoor seating, and daily baked-fresh bread,” Sevtap said. “Everything is organic.”

The restaurant, set to open April 14, will “celebrate the best of the American Riviera with a heavy emphasis on hyper-locality, sourcing primarily from nearby farms and purveyors, and bringing to life a truly sustainable concept set against the unparalleled backdrop of Miramar Beach,” according to a news release.

The name is a subtle nod to one of Los Angeles’ most prolific architects, Paul Revere Williams, whose work influenced several of the resort’s most distinguished design details, the news release stated.

Jennifer Zacharias, a spokeswoman for Rosewood Miramar Beach, said The Revere Room will bring to Montecito “an elegant yet lively dining experience, ideal for all occasions.”

The seasonally driven menu will incorporate the freshest ingredients from local farmers, fishermen and ranchers, as well as the resort’s own garden, to offer an array of health-conscious cuisine good for people and planet alike, according to the news release.

KSBY-TV has hired Genelle Padilla as the new co-anchor of its morning show, “Daybreak.”

Padilla will co-anchor the two-hour newscast alongside Neil Hebert and Brooke Martell.

“I am beyond excited and honored to be a part of the No. 1 station in the market,” Padilla said. “The Central Coast is an extraordinary place to live, and I am grateful for this opportunity to deepen my roots here. I’m looking forward to growing both professionally and personally at KSBY, as well as raising my family in this wonderful and welcoming community.”

Padilla is a former anchor and multimedia journalist at KCOY-TV.

“We are happy to have Genelle bring her experience and contacts on the Central Coast to KSBY,” said Ed Chapuis, vice president and general manager. “We are looking forward to her adding even more depth to our community coverage.”

Home Videos The WORLD of WINE – Wine News. Cheap wine, tasting notes and cooking with wine The World of Wine – May 2021 … END_OF_DOCUMENT_TOKEN_TO_BE_REPLACED

How to visit Napa Valley on a Budget. In this video Carson and I explain a few ways to enjoy Napa on the cheap. Tip and advice about how to visit Napa … END_OF_DOCUMENT_TOKEN_TO_BE_REPLACED

Home Videos Get To Know Argentina Wine | Wine Folly If you love Malbec, Argentina is your ultimate wine region. But that’s not … END_OF_DOCUMENT_TOKEN_TO_BE_REPLACED