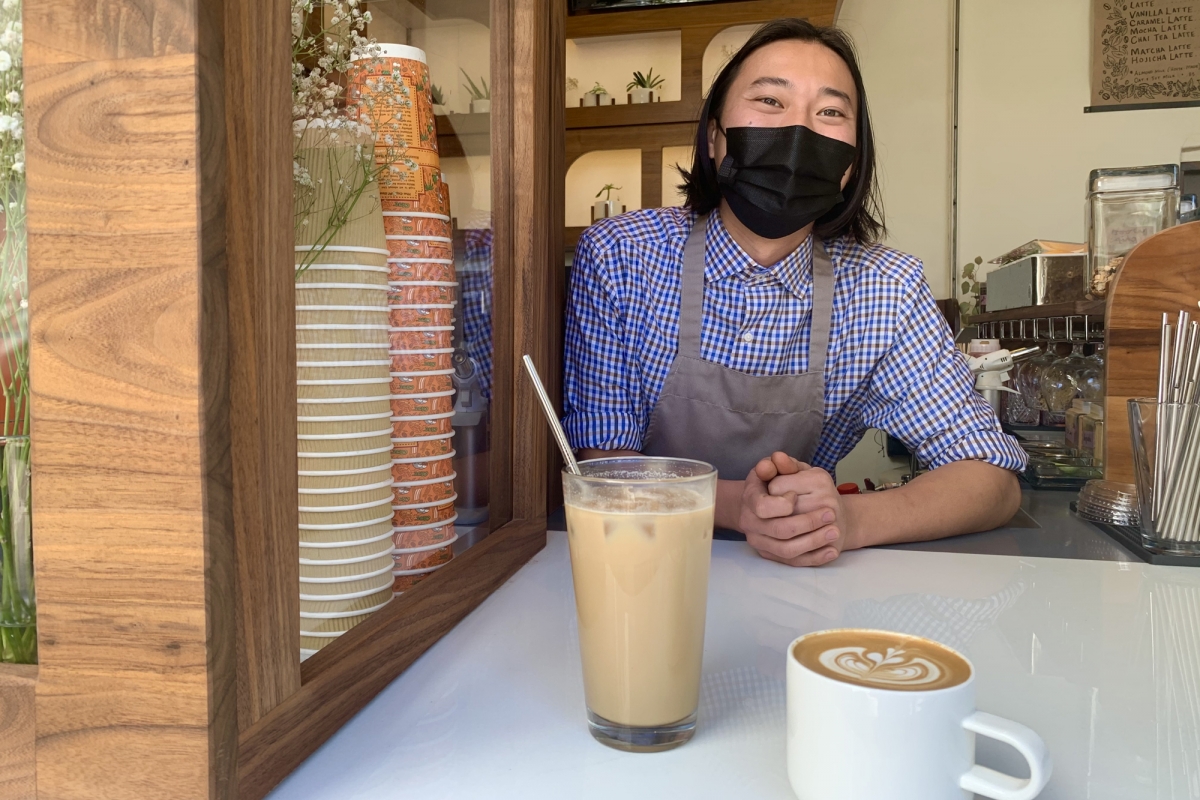 BizHawk is published weekly, and includes items of interest to the business community. Share your business news, including employee announcements and personnel moves, by emailing [email protected].

There is a new way to get buzzed on State Street, and it doesn’t involve alcohol.

Caje Coffee now has a location in downtown Santa Barbara.

The owners of the specialized coffee shop, with shops in Isla Vista and on Haley Street, are now serving drinks at 1316 State St.

“It is really a beautiful opportunity to have this courtyard be a public space right now,” CEO Troy Yamasaki said. “Especially with COVID and everything having to be outdoors. Just having a venue that just allows us to give our customers a place to rest and feel like they are safe and enjoy their beverages from here, it’s really nice.”

The coffee shop is sharing a space with leaseholder Petros Restaurant, which plans to reopen soon.

Caje first moved in at the end of November, but then, Gov. Gavin Newsom ordered restaurants closed to everything except takeout. Caje shut down, then reopened two weeks ago.

General Manager Jacob Mabee said a lot of study groups are going on right now, including some from Westmont College.

“Everyone is here with a sense of community, but it’s still safe,” Mabee said.

Mabee said it feels good to be downtown because the coffee is getting a whole new audience.

“Isla Vista and Haley are both the outskirts of Santa Barbara,” Mabee said.

Caje specializes in natural ingredients — the words that people can pronounce, he said — drawing attention to processed ingredients at some other coffee shops.

Mabee is a former UCSB student who fell in love with Caje as a student. He ran his own business before he joined Caje.

“I have always loved coffee,” Mabee said. “I am a big person on ingredients. Nothing compares to the coffee and the standards that they have here.”

Hayes Commercial Group reported in its end-of-year report that there are 31 retail properties for sale on State Street.

When it comes to retail, 2020 was the slowest sales year since 2014. Downtown State Street experienced only four sales in 2020. Storefront retail vacancy between the 400 and 1300 blocks of State Street is at an “unprecedented” 15.5%, according to Hayes.

People made only 10 lease transactions along the State Street corridor in 2020, less than half the volume of recent years.

Hayes noted some good news. The former Staples Building, 410 State St., was leased to Reality Church for one year.

Before the pandemic, according to Hayes, Santa Barbara’s office vacancy rate was already at 6%. At the end of 2020, it jumped to 8.5% with 103 available spaces, both record highs, according to Hayes. Vacancy has more than doubled since the low of 3.7% in 2014.

Draughtsmen began about five years ago as a small local craft beer maker and will make wine under the wine label Star Pine Cellars.

“We have an appreciation for well-crafted beverages and take a fluid approach to making small batch beverages,” the company said in a press release. “Our team brings expertise in wine, beer, specialty aged-beers and hopped teas at the very same doorstep. All are locally handcrafted with a high attention to detail.”

The company plans to sell the 2020 Roussanne, Santa Barbara County later this year.

“It’s a sublime feeling to experience the evolution of fruit into a beverage that brings people together, whether it’s for a special occasion or just a casual happy hour at a local bar,” said Brian Mckinnon, Star Pine winemaker. “I’ve been hooked and making wine every year since.”

Draughtsmen Aleworks is at 53 Santa Felicia Drive in Goleta.

Trusted Legal, with offices in Santa Barbara and Santa Ynez, has hired Nicole Hornick and Elke Kane to join the boutique law firm, which specializes in business, litigation and employment law.

Both are longtime Santa Barbara County residents. Hornick was raised in the Santa Ynez Valley and is a recent graduate of the Santa Barbara Colleges of Law. Hornick is experienced in civil litigation in both defense and plaintiff work. She is also passionate about elder abuse law.

Kane is a California provisionally licensed attorney who has considered Santa Barbara home for more than 20 years, according to a news release. She enjoys helping clients with a wide range of business needs, including contract negotiations, corporate organization, nonprofit filings, code compliance and bankruptcy.

Before attending law school, Kane owned and operated a wedding cake business and bakery, according to a news release.

Kane is a recent graduate of the Santa Barbara Colleges of Law. She is sitting for the California Bar in February. She is also fluent in Spanish and has volunteered her time translating and assisting community members with bankruptcy claims.

Home Videos The WORLD of WINE – Wine News. Cheap wine, tasting notes and cooking with wine The World of Wine – May 2021 … END_OF_DOCUMENT_TOKEN_TO_BE_REPLACED

How to visit Napa Valley on a Budget. In this video Carson and I explain a few ways to enjoy Napa on the cheap. Tip and advice about how to visit Napa … END_OF_DOCUMENT_TOKEN_TO_BE_REPLACED

Home Videos Get To Know Argentina Wine | Wine Folly If you love Malbec, Argentina is your ultimate wine region. But that’s not … END_OF_DOCUMENT_TOKEN_TO_BE_REPLACED