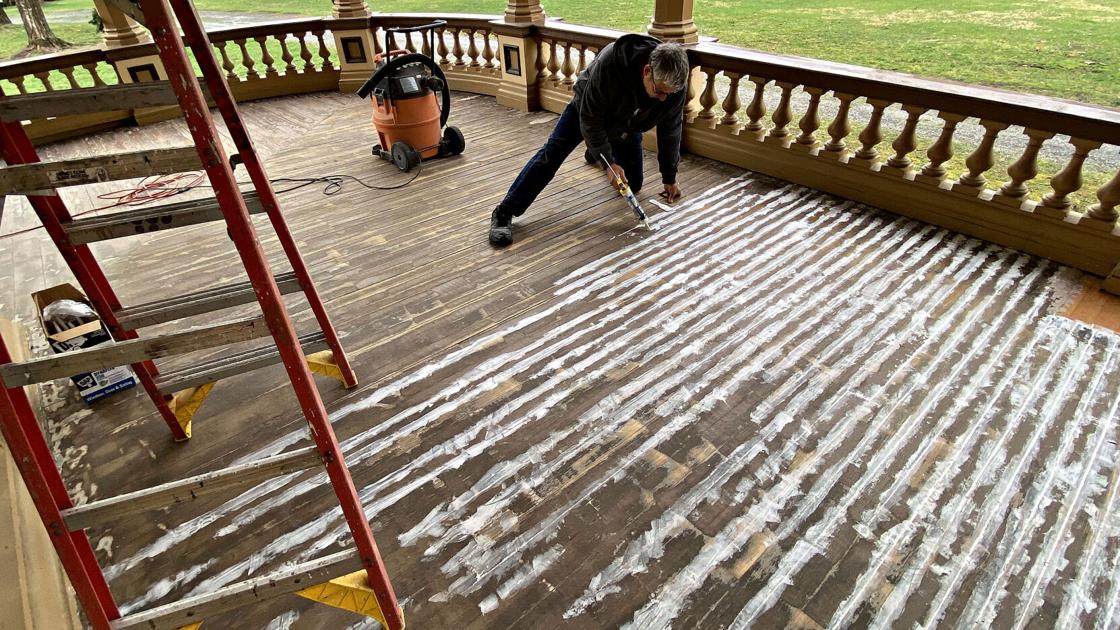 NORTH BENNINGTON — An array of capital improvements and a varied slate of events are planned this year for the Park-McCullough Historic Governor’s Mansion.

“We’re really excited about the 2021 season because not only Park-McCullough but the community needs some normalcy,” said Chris Oldham, who became the mansion’s first executive director in about a decade in September 2020, just months before the coronavirus reached Vermont.

Oldham, who prior to joining the nonprofit organization pitched the board on how he’d “put some life into the mansion and bring it to new heights,” said the pandemic put the brakes on a lot of what he had planned, which “was discouraging.”

But, he added, it “didn’t discourage me to the point where I felt we couldn’t do anything.”

The mansion managed to establish a number of events, some of which will return this year, that adhered to state guidelines, and it raised nearly $70,000 through its annual fundraising campaign, which will help to support several projects this year.

Winterizing the property’s carriage barn so that the nonprofit can host its own sponsored events and rent the space to the public in cold-weather months is a top priority. The barn is dormant for much of the year because of a lack of heat, Oldham said.

Facility rentals constitute a key revenue source for the organization, according to Oldham, and improvements planned for the mansion itself are intended to better equip it for hosting weddings and other events.

What was once the 19th-century mansion’s servants’ quarters will be transformed into a commercial kitchen that can be used to prepare cocktails and hors d’oeuvres, the exterior of the building’s south side is getting a facelift and a bridal suite is being created inside the mansion, Oldham said.

The property’s formal garden is being redesigned as a Victorian garden, complete with roses, lavender and other elements, and the greenhouse — formerly a storage space — will be refashioned as an attractive “garden lounge,” Oldham said. The organization is also refreshing its gift shop, contracting with Vermont-based artisans and producers.

One event that proved popular last season — a wine tasting on the mansion’s veranda — is returning this summer with enhancements. In addition to the wine tasting, led by couch + cork owner Nancy Koziol, The Graze Board & Co. will offer charcuterie and the Village Chocolate Shoppe will serve chocolates.

Yoga in the Garden, another new offering last year, will reprise its Sunday morning sessions but also expand to Wednesday nights. A once-a-month outdoor movie series is planned again for this year, too.

One new weekly event is a farmers and artisans market, which will be held from 10 a.m. to 1 p.m. on Sundays from May 30 through Labor Day weekend. Oldham said the event is intended to offer a kind of “block party” atmosphere. There will be live music, and Thyme Tables — the mansion’s exclusive caterer — will serve mimosas and bloody marys.

The mansion’s opening day is scheduled for Friday, May 28. It will feature $5 mansion tours, live music in the evening from The Julie Shea Band and the chance to check out the redesigned garden and the refreshed gift shop.

A more complete list of events at the mansion this year is available on its website, parkmccullough.org.

Unsurprisingly, there will be more rented events at the mansion than last year, Oldham said, but the organization is still proceeding cautiously and expects 2022 to be an even busier year. Weddings generate the most revenue, but the mansion also works with groups to host fundraising events, retreats and board meetings.

In addition to rentals and grants, memberships — which range from $100 to $1,250 for the season and come with a range of perks — are another important revenue source for the mansion. Some of the events that were free to the public last year — like Yoga in the Garden — this year will be free for members and accessible to non-members for a fee, Oldham said.

Oldham credited the nonprofit’s board members for their support and willingness to personally take on a variety of projects for the mansion, including painting, cleaning out rooms and leading tours.

The group recently brought on a part-time museum maintenance technician to handle a range of duties. Prior to the hiring, Oldham was the organization’s sole employee, though the mansion uses contractors for landscaping and other work. Oldham said he hopes to hire for other positions, like events coordinator, next year.

Since becoming a museum in 1967, the mansion has gone through many different phases of leadership, Oldham said. Looking to the future, he added, it’s “not as if we’re starting brand new, but we kind of are.”

The group is continuing to fine-tune its organizational and financial structure and focus on long-term capital improvements, Oldham said. Refurbishing the veranda is one project that will need to be taken care of in the not-so-distant future.

There is “so much potential here,” said Oldham, citing the range of events — from concerts to baby showers — the venue can accommodate.

Home Videos The WORLD of WINE – Wine News. Cheap wine, tasting notes and cooking with wine The World of Wine – May 2021 … END_OF_DOCUMENT_TOKEN_TO_BE_REPLACED

How to visit Napa Valley on a Budget. In this video Carson and I explain a few ways to enjoy Napa on the cheap. Tip and advice about how to visit Napa … END_OF_DOCUMENT_TOKEN_TO_BE_REPLACED

Home Videos Get To Know Argentina Wine | Wine Folly If you love Malbec, Argentina is your ultimate wine region. But that’s not … END_OF_DOCUMENT_TOKEN_TO_BE_REPLACED