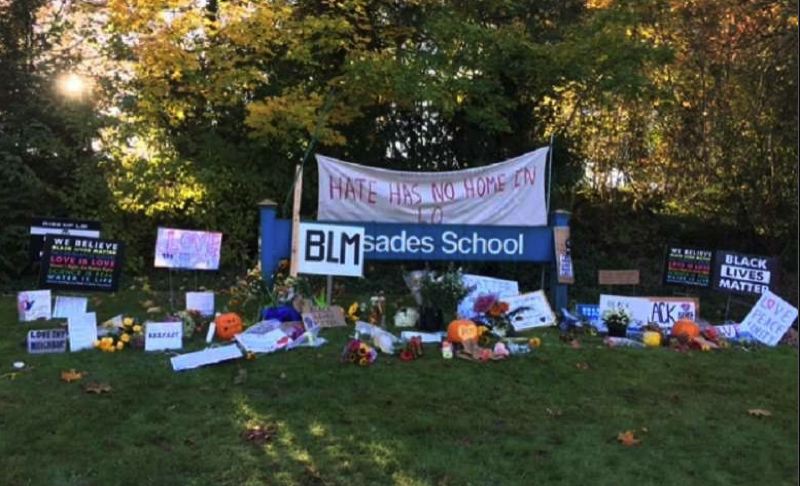 Defendant pleads guilty to minor charge in incident in which a deer head was left near a Black Lives Matter sign.

LAKE OSWEGO — The suspect in the severed deer head case that left Lake Oswego community members outraged pleaded guilty to one of four charges filed against him in Clackamas County Circuit Court.

According to the Lake Oswego Police Department, passersby reported the sightings of the severed deer heads at 9:19 a.m. and 12:23 p.m. Thursday, Oct. 29, with one on the corner of Greentree Road and Campus Way and the other on the 2700 block of Greentree Road. The two deer heads were left next to a Black Lives Matter sign and a sign supporting Joe Biden for president.

Thomas A. Jakmauh, 19, was charged by the Clackamas County District Attorney’s Office with two counts of second-degree disorderly conduct and two counts of offensive littering — all misdemeanor charges — for leaving two severed deer heads at or near homes in the Palisades neighborhood.

Jakmauh pleaded guilty earlier this month to one count of second-degree disorderly conduct — a class B misdemeanor — and was sentenced to 12 months of probation and 40 hours of community service work to be performed in the city of Lake Oswego to make reparations to the affected community, as well as a fine of $360.

Community members previously expressed outrage at the charges, particularly Lake Oswego resident Peggy Lant — one of the victims whose home was targeted — who said she felt Jakmauh should be charged with a bias or hate crime.

The court also ordered Jakmauh to refrain from alcohol use and to complete a DUII Diversion program in Benton County, where he was charged with drunken driving in late 2020. A plea hearing for that charge is scheduled for March 11.

On Tuesday, Feb. 16, the library announced it will be pushing back the annual event, with the goal of being able to hold it once the current pandemic restrictions are lifted and the COVID-19 crisis is over.

The Local Authors’ Fair is usually planned in May. This year, however, it will take place in the fall.

The event is a free book fair highlighting the work of authors in the tri-county area.

“Writers from Washington, Multnomah and Clackamas counties are invited to apply for a space to share and promote their latest work, including enthusiasts of all genres like adult, young adult and children’s literature,” said the Beaverton City Library in a press release. “Participating authors will receive their own table where they are welcome to discuss and sell their books, keeping all proceeds for themselves.”

In return for their involvement in the fair, the library typically requests that each author donate two books. Library officials say one book will be raffled off to attendees of the event, and one book may be added to the library’s collection.

Donated books not added to the collection will be sold by the Friends of the Library to support library programs and services.

Local author who want to be featured at the Local Authors’ Fair and visit the library website.

WASHINGTON COUNTY — As with so many businesses, 2020 was a challenging year for local wineries.

Wineries have suffered a toll as the result of restrictions placed on food and beverage/hospitality businesses throughout the state in the midst of the COVID-19 pandemic. Sales, in many cases, have been down. Events have been limited. As a result, one of rural Washington County’s growing industries has experienced significant frustration and setbacks.

According to a survey conducted by the Oregon Wine Board this past December, state COVID-19 restrictions were expected to lead to more than $4.5 million in lost revenue for 81 wine tasting rooms in Oregon — out of a total of 550 tasting rooms statewide.

Those numbers are primarily due to the significant dent in the on-premises sales that frequently come from tastings, corporate outings and other types of social gatherings either prohibited or limited by state restrictions throughout the year.

Half a million trees planted in conservation district’s program

EAST MULTNOMAH COUNTY — An estimated 500,000 trees have been planted through the East Multnomah Soil and Water Conservation District’s StreamCare program.

The program has been planting native trees and shrubs for 12 years on public and private land in Gresham, Corbett and Troutdale to help improve stream health and salmon survival.

More than 200 landowners in East County have voluntarily joined StreamCare.

“For one thing, it’s free. And we have found that once landowners understand the benefits for their land, they’re excited to participate,” she said.

The program is free for landowners along Johnson, Beaver, Smith, Buck and Big Creeks and Bonnie Brook. The work is done by companies contracted by the program.

“Our crews are able to transform stream fronts from a blackberry bramble to a thriving native forest that attract wildlife, protect water quality, and build more resilient communities,” Hamilton said.

Steve Corson, PGE spokesperson, said the new center will focus on PGE’s pre-apprentice and apprentice training programs as well as be used for safety programs and continuing education for journey-level line workers and crew leaders.

The site, at 20680 S.W. Langer Farms Parkway, also will contain a 43-stall parking lot, as well as an outdoor training center containing non-energized poles for training and practice, according to PGE’s application to the Sherwood city government for permission to build.

Corson said the facility will offer more realistic training scenarios by allowing training items to remain in place longer, as opposed to having to tear them down at the end of the day, something that occurred with the outside location.

“We expect to be pouring concrete this month and beginning construction of the main building in March, with final completion late this year,” he said.

This will be the second major PGE project under construction in the industrial area where Sherwood and Tualatin meet.

Pamplin Media Group includes the Portland Tribune, the flagship paper, and more than two dozen other papers in Oregon. To find a list of communities PMG covers, see “Daily News Where You Live,” to the right of this story.

You count on us to stay informed and we depend on you to fund our efforts. Quality local journalism takes time and money. Please support us to protect the future of community journalism.

Home Videos The WORLD of WINE – Wine News. Cheap wine, tasting notes and cooking with wine The World of Wine – May 2021 … END_OF_DOCUMENT_TOKEN_TO_BE_REPLACED

How to visit Napa Valley on a Budget. In this video Carson and I explain a few ways to enjoy Napa on the cheap. Tip and advice about how to visit Napa … END_OF_DOCUMENT_TOKEN_TO_BE_REPLACED

Home Videos Get To Know Argentina Wine | Wine Folly If you love Malbec, Argentina is your ultimate wine region. But that’s not … END_OF_DOCUMENT_TOKEN_TO_BE_REPLACED