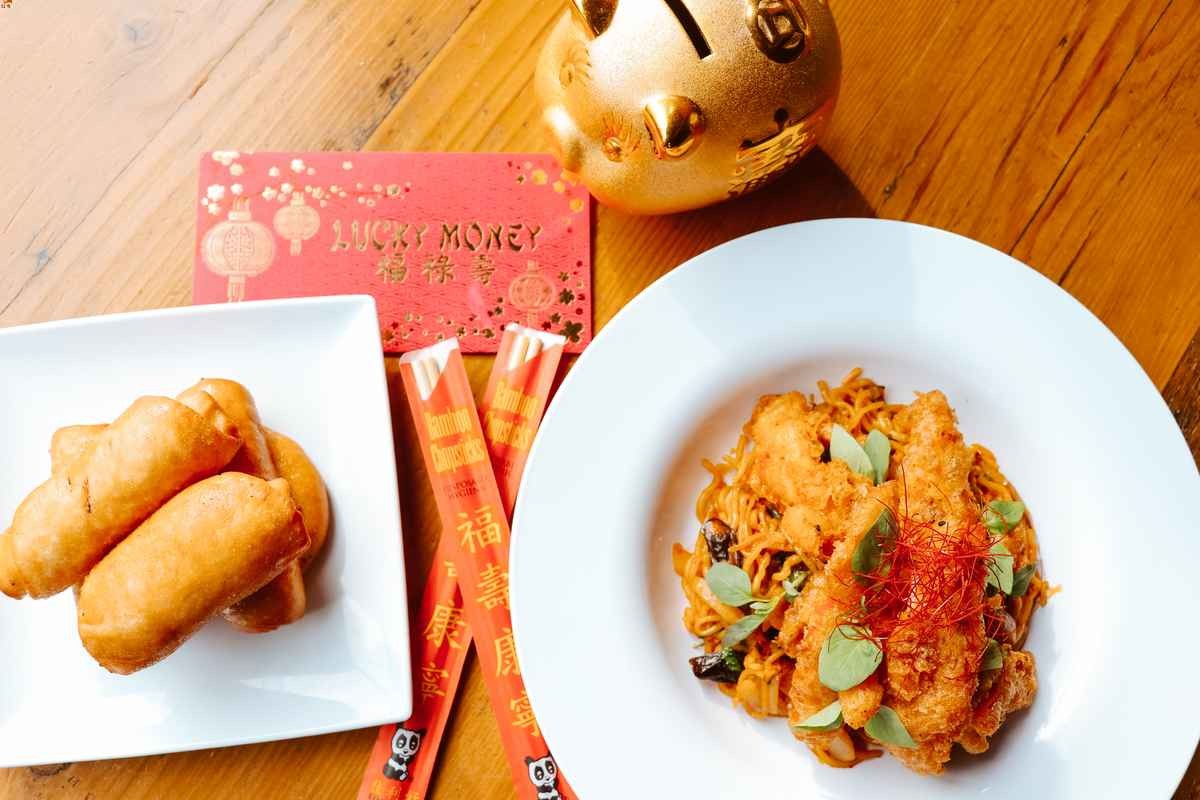 This weekend marks the beginning of the Year of the Ox, and here’s hoping the good health attributed to those who were born under a bovine moon spills over into the general population, because wow, do we need it.

This weekend, you can nosh on Israeli fare from Safta in honor of the Denver Jewish Film Festival and treat your sweetie to a paddling (or pudding, depending on your flavor of romance). After you decide how to heat up the deads ahead, keep reading for even more food and drink happenings in February and March.

Friday, February 12
Ace Eat Serve, 501 East 17th Avenue, launches its Lunar New Year menu on Friday, February 12. Diners can opt to eat in or take out tempura king crab, stir-fried noodles in coconut curry, crispy garlic bao, matcha tiramisu and a special Year of the Ox cocktail of bourbon, yellow chartreuse, ginger syrup and star anise. You’ll also get lucky money in the form of scratch tickets that entitle you to sake, sides or sips. Visit the eatery’s Instagram page for photos and details, then reserve a table (inside or out) on Ace’s website. The dishes will also be available to go.

Saturday, February 13
In conjunction with the Denver Jewish Film Festival, which is currently running through Wednesday, February 17, Safta, 3330 Brighton Boulevard (at the Source Hotel) is offering Dinner and a Movie takeout packages. For $65, you’ll get Safta’s renowned hummus and pita, labneh, lutenitsa (a red pepper and tomato chutney), falafel and a half chicken roasted with harissa. Then take a look at the festival lineup to purchase movies tickets for $12 each. Our perfect pairing?  Chewdaism: A Taste of Jewish Montreal (in which two irrepressible Montreal natives trawl the iconic Jewish eateries of their hometown) and The Vigil (a horror film helmed by Colorado filmmaker Keith Thomas about the corpse-related troubles of Yakov, a young man who’s estranged from his Hasidic community but is nonetheless hired to watch over the body of an old man until his burial).

Sunday, February 14
Yes, we’ve already published our annual Valentine’s Day list, but there are plenty of places to spread your love around on Sunday, February 14. Here are a few more (ahem) unusual offerings we’ve come across:

Noble Riot is offering a Valentine’s Day wine pairing from 4 to 5:30 p.m., but it’s not with chocolates (even fancy confections) or flowers. Instead, sign up on Tock (for $69, naturally) and you’ll get a half-bottle of Champagne, a half-bottle of red, a virtual lesson in BDSM from domme Mistress Nicci, and a Noble Riot-branded blindfold. You can add on a heart-shaped paddle or a black riding crop (but you can’t add on extra wine, you greedy slut). While pick-up details on the wine bar’s Instagram page are scarce, we assume you’ll be filled in on the info when you’ve done enough to deserve it.

In a less, um, intense, V Day experience, chef Taj Cooke is turning out a Jamaican menu at Pony Up, 1808 Blake Street, on Sunday, February 14, and Monday, February 15. Reserve your spot for one of the three seatings (4 to 6 p.m., 6 to 8 p.m. or 8 to 10 p.m.) on Eventbrite, then show up and get your island on with umbrella drinks from the bar, both sweet and savory fritters, ackee and saltfish, jerk chicken, jerk shiitake sandwiches, escovitch snapper, rum cake and more.

For tasty Greek diner food in Denver, always look for a joint that lists green chile cheese fries alongside gyros (yes, really). One of our favorites, Chef Zorba’s, 2626 East 12th Avenue, is offering a takeout dinner that would be called a three-course prix fixe menu and cost twice as much if it were being served anywhere else. Opt for grilled filet mignon or salmon with a twice-baked potato, asparagus in Hollandaise sauce, and crème brûlée for a mere $18.95. Want to add on wine? All of Zorba’s selections are $19 per bottle. Pre-order on the eatery’s website today (that’s Friday, February 12) for pick-up on Sunday, February 14.

Monday, February 15
Food access and advocacy group Front Line Farming is now accepting applications for 2021’s beginning farmer apprenticeship. The program, which runs from May 24 through October 8, is designed to educate apprentices about composting, planting from seed, irrigation systems, pest management and harvesting (among many, many other things) through twenty hours a week of hands-on farm work as well as classes and seminars. Stipends will be paid to those who are selected for the program. The apprenticeship is open to aspiring BIPOC growers. Applications are due by Monday, February 15; find the application and more details here.

Sunday, February 21
If your love affair with boxed wine is waning at the same time your income is soaring, enroll in Frasca’s series of wine classes. Each lesson includes six bottles of wine, a workbook, a pre-recorded course video and access to a live Q&A. Visit Tock to choose from one of three classes (or sign up for them all, though at $350 a pop, you’d better be one loaded learner): the Rhône Valley (Q&A scheduled for Friday, March 19); Reisling (Q&A takes place on Friday, March 26); and soil and minerality (Q&A on Friday, April 2). You’ll pick up your course materials on Sunday, February 21, so you’ll have a month to sip, study and mull over questions before the Q&As (all of which are scheduled at 5:30 p.m.). Pick-up locations in both Denver and Boulder are available; visit Frasca’s website for details.

Thursday, February 25, through Sunday, February 28
If you’ve been itching to attend a beer or wine festival (sitting on your couch surrounded by dead soldiers from the last week doesn’t count), you’ll want to snag tickets to Fade 2 Black now. Like, right now. Like, go buy them on the event website and then come back and read the rest of the description of this weekend devoted to drinking beer and wine made by Black producers. The festival launches Thursday, February 25, with a beer dinner from 7 to 9 p.m. with brews from California brewery Crown and Hops. The four-course wine dinner is Friday, February 26, and includes five different wines. Saturday, February 28, brings the grand tasting, with over twenty beers and wines, appetizers and live music, from 2 to 6 p.m. And this all takes place outside your house, at Peak Beverage, 4375 Brighton Boulevard. And if you’ve truly grown roots in the past twelve months, you can still opt for virtual beer and wine tastings on Sunday, February 28. Tickets for the in-person events run from $75 to $125 and are very limited (just thirty are being sold for each dinner and fifty for each grand tasting session). Find out more on the event website.

Thursday, March 11
On Thursday, March 11, Mythology Distillery is joining forces with the Crescendo Society, a group of dysfunctional siblings endowed with superpowers and raised by an emotionally distant, demanding father as a vigilante…oh, wait, wrong press release. In any case, the Crescendo Society (which we prefer to think of as a super-secret, under-35, militant cheerleading troupe rather than the “young professionals society” of the Colorado Symphony) will be joining symphony musicians as well as Mythology for a virtual cocktail class with live musical performance at 7 p.m. Purchase your cocktail kit for $35 ($25 for a second kit) and you’ll get four ounces of three different spirits, plus the rest of the drink ingredients, the cocktail demo and a chat with musicians after their performance. The deadline to order is Friday, March 5; cocktail kit pick-up is at the distillery’s tasting room, 3622 Tejon Street, during regular business hours (4 to 8 p.m.) from Monday, March 8, through Thursday, March 11. Get details and tickets on the Colorado Symphony website.

Wednesday, March 24
Denver’s Staenberg-Loup Jewish Community Center generally hosts its expansive JAAMM (Jewish Arts, Authors, Movies and Music) Festival over several months in the fall, with live cultural events across the city. In 2020, of course, that was upended. The silver lining: The fest is going on for a full twelve months (starting last year and well into 2021), and all programming is virtual. On Wednesday, March 24, James Beard Award-winning author of The Cooking Gene, food historian and deeply engaging Instagram presence Michael Twitty will discuss the holiday of Passover. Tickets for the 7 p.m. lecture, $18, are on sale now at the festival’s website, where you can also see previous events on demand.

Know of an event that belongs on this calendar? Send information to cafe@westword.com.

Home Videos The WORLD of WINE – Wine News. Cheap wine, tasting notes and cooking with wine The World of Wine – May 2021 … END_OF_DOCUMENT_TOKEN_TO_BE_REPLACED

How to visit Napa Valley on a Budget. In this video Carson and I explain a few ways to enjoy Napa on the cheap. Tip and advice about how to visit Napa … END_OF_DOCUMENT_TOKEN_TO_BE_REPLACED

Home Videos Get To Know Argentina Wine | Wine Folly If you love Malbec, Argentina is your ultimate wine region. But that’s not … END_OF_DOCUMENT_TOKEN_TO_BE_REPLACED