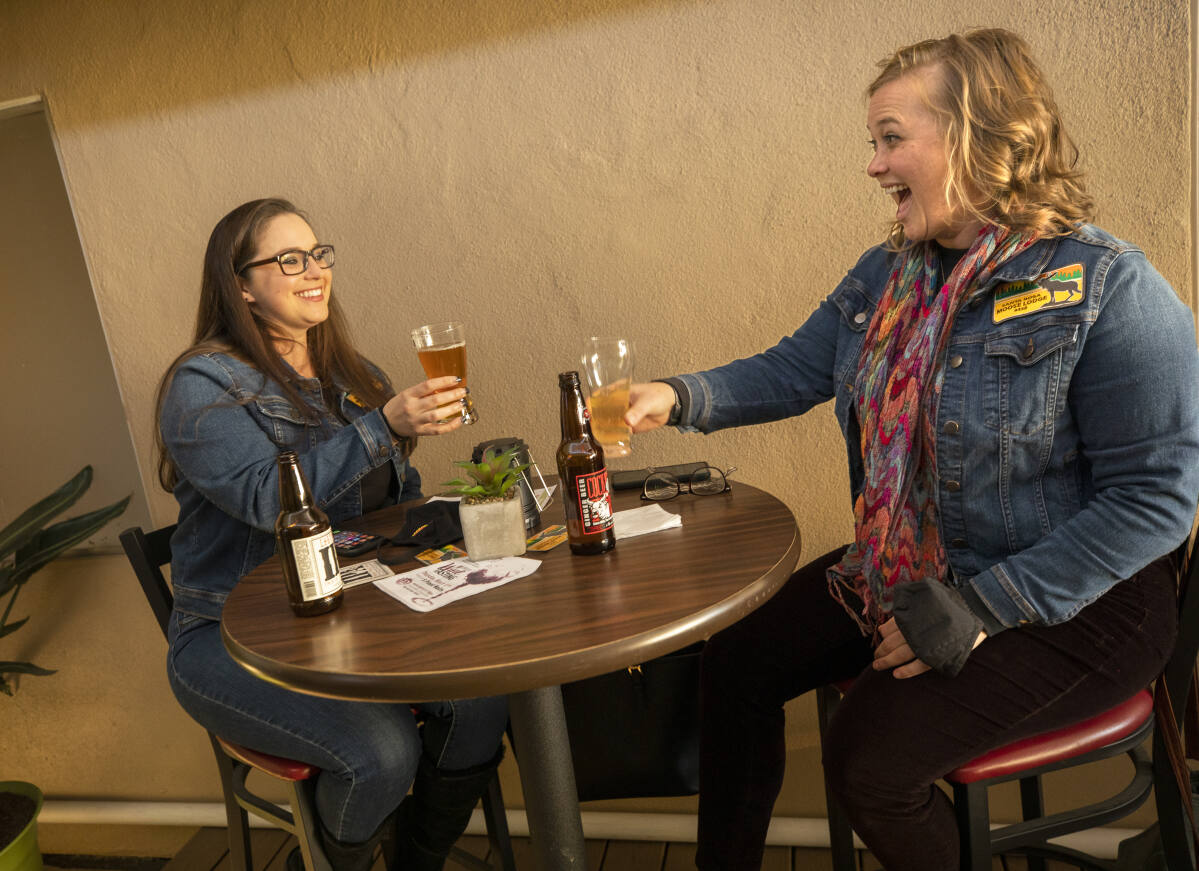 This is not your grandfather’s Moose Lodge.

Posted on the outdoor patio of the Santa Rosa Moose Lodge, alongside requests that patrons wear masks and not move the space heaters, are signs for upcoming attractions: live music with the Friday 3, a three-piece combo on the evening of Feb. 26, a pinot noir-intensive wine tasting on March 11, followed a day later by dinner and a movie, featuring a pork chop and mashed potato entrée to complement “Casablanca.”

And with the days getting longer, said Kathleen Nelson, who manages the lodge, it’s almost time to bring back 6 p.m. Wednesday line dancing lessons, where members repair to the parking lot to learn such steps as the Tush Push and Hoedown Throwdown.

Inside — where members will be able to return when indoor dining comes back — is a full bar, featuring local craft beers, flat screen TVs, a 22-foot-long shuffleboard table, a digital jukebox and USB outlets for visitors to charge their phones.

It’s almost as if the Lodge “was built for millennials,” said Nelson on a recent weeknight. Since the Santa Rosa Moose Lodge moved to Airway Drive in 2016, she and its (relatively) youthful board of directors have worked hard to broaden the appeal of an establishment whose very name, Nelson admitted, “makes people think of their grandfather.”

While it’s tempting to say that this is not her father’s Moose Lodge, that’s not quite accurate. Nelson grew up going, first at its location on Santa Rosa Avenue, then at Druid Hall on College Avenue. She tagged along with her mother and stepfather, Gary Packard, who was deeply involved in the Loyal Order of the Moose, a national organization founded in 1888, which now boasts 1,500 lodges, nationwide.

When the Santa Rosa lodge bought its current property, Packard and a crew of fellow volunteers spent years gutting the structure and rebuilding it from the inside-out.

At first, Nelson said, the Moose Lodge it was “just a place my parents dragged me on Friday nights. But then I started thinking about what the organization means to the community. It really lends a lot of support to a lot of people.”

In addition to being a kind of “personal Cheers bar” for members — “you walk in, everyone knows your name,” she said.

The Moose Lodge, a nonprofit, is guided by a mission of charity and giving back to the community. At blood drives last year, for instance, the Santa Rosa lodge collected 233 units of blood for local hospitals. Nelson recently dropped off a check for $1,700 to the Boys & Girls Club of Greater Santa Rosa. That was proceeds from the lodge’s Friday night bingo sessions, which differ from more garden variety, senior-intensive bingo games, said Matt Jones, a 35-year-old board member.

Where a more traditional bingo hall may be frequented by “a lot of retired folks” giving off an “I’m just here to play bingo, don’t try to talk to me” vibe, the Moose Lodge version is bringing more energy, said Jones, who teaches 7th grade at a middle school in Santa Rosa. “You’re playing bingo but you’re also eating dinner, it’s moving kinda fast, and people are getting rowdy.”

Jones discovered the concept of the Moose Lodge two years ago, while visiting friends in Oregon.

“They took me to a Moose Lodge and told me, ‘Dude, the food and drinks are so cheap here you won’t believe it,’“ he recalled. Upon returning home, Jones checked out the Santa Rosa lodge. “I was like, OK, I can get dinner and a couple beers for under 20 bucks — sign me up.”

Annual dues are $50 for men and $30 for women, until the end of April. As of May 1, with worldwide implementation of the “One Moose” concept, all members, male and female, will have equal membership rights, privileges, opportunities and a vote in Lodge business and activities,“ according to the Santa Rosa chapter’s newsletter, The Antler.

“Just decent,” when he joined, Jones said, the food at the Santa Rosa Moose Lodge has undergone vast improvement in the past year. That’s partly because Jones and other board members have figured out how to use the fryer and grill in the lodge’s kitchen, mastering certain simple dishes such as hamburgers, fish & chips and chili fries. Nor does it hurt that board member Larry Hillix is a competitive barbecuer and pitmaster at Santa Rosa’s WarPigs, a BBQ catering company.

In December, the Santa Rosa lodge reached an agreement with Sonoma County Catering and its head chef, Cesar Orozco. “Chef Cesar” and his team are now renting the lodge’s full kitchen. As part of the agreement, they also prepare food for the Moose Lodge. This has resulted in an immediate, dramatic culinary upgrade. “We went from being a five or six to a nine or a 10,” Jones said.

“COVID forced us to figure out the food, and to figure out this outdoor space,” said Nelson, a graphic designer whom Jones describes as a “super creative, force-of-nature kind of person.”

The patio now occupied by members three evenings a week, Wednesday through Friday, was essentially a derelict storage area. Since then, volunteers have cleaned it out, installed a deck, landscaping, tables, space heaters and a “cover” — please don’t call it a roof — to keep rain off Moose members’ heads.

To Jones, much of the lodge’s appeal, aside from the food and drink, is the cross-section of people he meets, from 30-somethings like himself to members half a century older.

“I didn’t grow up with my grandparents around,” he said, “so I like rubbing elbows with folks in their 70s and 80s.”

You can reach Staff Writer Austin Murphy at 707-521-5214 or austin.murphy@pressdemocrat.com or on Twitter @ausmurph88.

Home Videos The WORLD of WINE – Wine News. Cheap wine, tasting notes and cooking with wine The World of Wine – May 2021 … END_OF_DOCUMENT_TOKEN_TO_BE_REPLACED

How to visit Napa Valley on a Budget. In this video Carson and I explain a few ways to enjoy Napa on the cheap. Tip and advice about how to visit Napa … END_OF_DOCUMENT_TOKEN_TO_BE_REPLACED

Home Videos Get To Know Argentina Wine | Wine Folly If you love Malbec, Argentina is your ultimate wine region. But that’s not … END_OF_DOCUMENT_TOKEN_TO_BE_REPLACED