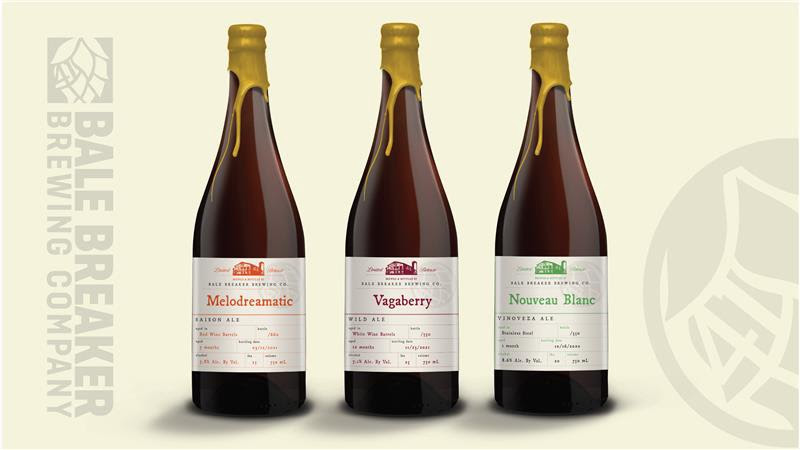 “We launched our barrel-aged beer program out of our taproom in late 2019 but took all of 2020 to experiment and decide what direction we’d like to go with the program,” Meghann Quinn, Bale Breaker co-owner and business manager said. “In 2021, we’re refining our program with just 2 release dates: this spring release, focusing on the wine barrel-aged beers that celebrate the grapes grown here in the Yakima Valley, and a fall release that will focus on the whiskey barrel-aged beers we’ve become known for.”

These three spring releases will be available out of Bale Breaker’s Taproom starting April 22nd, in conjunction with Spring Barrel Wine Tasting Weekend in the Yakima Valley. The wine barrel-aged bottled beers will also be getting limited distribution in late-April throughout Washington, Oregon, and Idaho at select bottleshops and stores.

Vinoveza is a new style of beer fermented with wine grape juice exclusively made during crush. This Belgian-style saison was fermented with freshly pressed Riesling juice from DuBrul Vineyard and released after bottle conditioning to celebrate the harvest. Captures the aroma and acidity of Riesling grapes and balances them with the fruity character of Belgian brewers’ yeast. Aromas of lemon, pear, grape, banana, and clove.

Boasting a secondary fermentation with real peach and apricot puree, this Belgian-style saison was aged in Côte Bonneville red wine barrels with Brettanomyces wild yeast before bottle conditioning. A variation on our Romantique Saison Ale. Aromas of stone fruit and cherry with balanced acidity.

Crafting fresh-off-the-farm brews from the middle of a hop field, Bale Breaker Brewing Company is a family-owned brewery located in the heart of the Yakima Valley. Hops are in the family’s DNA: the great-grandparents of sibling-owners Meghann Quinn, Kevin Smith, and Patrick Smith first planted hops in the Yakima Valley in 1932, the year before Prohibition ended. Over four generations, their love of hops has evolved into a passion for craft beer. Today, Meghann, Kevin, Patrick along with Meghann’s husband, Kevin Quinn, operate a 30-barrel brewhouse and a 27,000 square foot facility surrounded by their family’s hop fields, crafting seven year-round canned beers including the widely celebrated Topcutter IPA and GABF medal winner Hazy L IPA, and are distributed throughout Washington, Idaho, and Oregon. For more information, follow Bale Breaker on Facebook and Instagram (@balebreaker), or online at balebreaker.com.

Home Videos The WORLD of WINE – Wine News. Cheap wine, tasting notes and cooking with wine The World of Wine – May 2021 … END_OF_DOCUMENT_TOKEN_TO_BE_REPLACED

How to visit Napa Valley on a Budget. In this video Carson and I explain a few ways to enjoy Napa on the cheap. Tip and advice about how to visit Napa … END_OF_DOCUMENT_TOKEN_TO_BE_REPLACED

Home Videos Get To Know Argentina Wine | Wine Folly If you love Malbec, Argentina is your ultimate wine region. But that’s not … END_OF_DOCUMENT_TOKEN_TO_BE_REPLACED