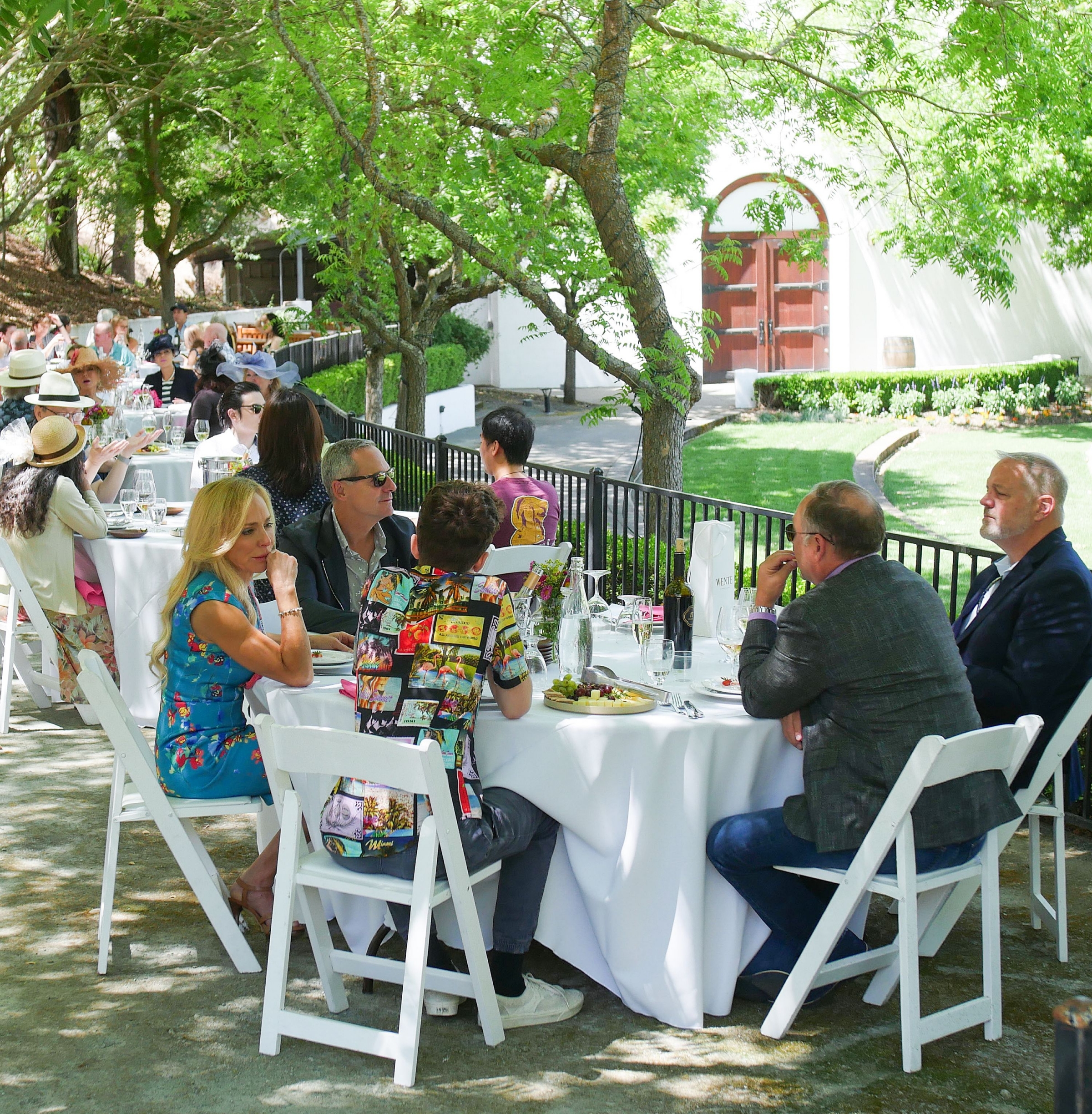 Wine country ushers in return of tourism to Livermore Valley

With statewide COVID-19 restrictions loosening and weather heating up, the Livermore Valley wine industry is welcoming visitors back for tastings, special events and live music after lying mostly dormant for over a year.

The Weekly spoke with four of the region’s 50-plus wineries and the Purple Orchid resort about how they overcame hardships during the pandemic and what’s in store for customers and club members moving forward.

After the first pandemic shutdown in March 2020, McGrail Vineyards and Winery initially shifted to offering virtual events and curbside pick-up options, according to president Heather McGrail. As fall approached and a number of establishments were allowed to briefly reopen before closing again in December, the family-owned winery allowed visitors back on the property by reservation only with just a handful of tables available on the winery’s patio.

While guests are still required to make reservations to visit in 2021, McGrail Vineyards has expanded its offerings to include live music events called “Live on the Lawn.” There are socially distanced white circles spray-painted on the front lawn of the winery called “picnic pods” that groups can reserve for about six to 10 people and hear bands play onstage.

“When you come to Live on the Lawn, you bring your lawn chair, you bring your blanket, some people even have folding tables they bring out. It’s very much like going to a rural park setting — the only difference is there are bathrooms available and wine for purchase,” McGrail said. She added there is also often a food vendor on site for these events.

“I’m happy to be out here and I appreciate all of the precautions they’re taking — I hope it sticks, actually. I like that everything is socially distanced,” Sunnyvale resident Jessica Gonzalez said at a recent cheeseboard making workshop hosted by Charming Fig Catering and McGrail Vineyards.

Although they’ve started ramping up their in-person events, McGrail said they plan to continue holding virtual experiences but they will become less frequent.

“Throughout our time as a winery, we would get people who would join the wine club and either live out of state or would move out of state and they would stay in the wine club and it was kind of like, ‘Great, we’ll send you some wine.’ But we didn’t have much connection with those people, and so, the virtual events have been really a great way to stay connected with people who don’t live close,” McGrail said.

The winery will also continue its “SIP” (shelter in place) club, which is a paid subscription service launched during the pandemic for Tri-Valley residents that includes two different bottles of wine delivered directly to homes each week followed by a biweekly virtual tasting call.

“It was going to be over once the shelter in place was lifted but people love it and so we’re going to continue that on,” McGrail said.

As restrictions become looser over time, McGrail said she hopes to start planning more food and wine pairing events. “Before it was 100% about the wine, but when you’re stuck at home all day and you can just mess around and cook and create recipes and all of that, we really got into that. And we started a blog and had a lot of different pairing types of ideas.”

She said they will resume their Friday Night Live summer music series this year — set to run biweekly from June 18 through Sept. 11 — but it will be moved from their back patio to the front lawn where there is more space for social distancing.

“The only constant in the business right now is that nothing is constant. Every two to three weeks we are making adjustments, we’re changing something, we’re adding something or taking something away. It’s just one of those times that you’ve got to be nimble right now in order to stay in business,” McGrail said.

Two of the winery’s longstanding traditions that definitely won’t be returning this year are the lobster feed and paella party. “Those are probably going to be off the table until 2022,” McGrail said.

Like McGrail, Wente Vineyards event director Ann Ogden told the Weekly that staffing has been one of the toughest challenges during this time.

“We thought the pool would be a little more plentiful but people just aren’t applying as much as we thought they would be applying,” Ogden said. “I think people are still a little leery of serving the public, maybe still getting unemployment, maybe there are still childcare issues. so I think to find the right staff has been a little bit harder.”

Ogden said that eventually, once more staff is in place and it’s safe to do so, Wente plans to bring back larger events like their summer concert series. “We’re doing great and I think we’re being safe. I don’t think we’re at the point where we need to have 1,000 people on the property, so I just think slow and steady is kind of the way,” she said.

Like Wente Vineyards and McGrail Vineyards, Steven Kent Winery and Darcie Kent Vineyards are also currently open for tastings and special events by reservation only.

“COVID, obviously, has been a dramatic challenge for everybody in every walk of life. From a business standpoint, it’s been particularly difficult, I think, for the hospitality industry,” said Steven Kent Mirassou, CEO and head winemaker of The Lineage Collection, which comprises The Steven Kent Winery, Lineage Wine Company and Mia Nipote Wines.

One example Mirassou provided is the financial hit that restaurants and wineries have taken as a result of being closed to onsite service for half the year and operating at significantly lower capacities upon reopening.

Mirassou also said the pandemic created an emotional void for him, staff and club members. “We’ve been able to create a lot of really wonderful relationships with our club members over the last 25 years and with our guests — they’ve become friends. When you can’t see your friends, except through a piece of cloth or a shield or what have you, that was a loss for me, personally,” he said.

Despite its difficulties, the pandemic provided Mirassou an opportunity to experiment with virtual experiences, which allowed the winery to conveniently engage with a number of wine club members who are on the East Coast.

“Using Zoom and using those technologies is definitely something that we’re going to continue,” Mirassou said. “It’s not like being face-to-face but it’s the next best thing.”

Mirassou’s business philosophy in the face of adversity encourages perseverance and flexibility.

“No one could have foreseen, necessarily, how bad this was going to be but there are always going to be challenges from a business standpoint,” Mirassou said.

“We’re in the agricultural business, so there’s always something different happening in that culture — there was a fire happening in 2020 at the same time that COVID is happening,” he continued, adding:

“We tend to be pretty flexible as agricultural workers in a way but the pandemic has taught us that you can’t wait for a future to unfold in front of you, you have to be active about creating the future that you want for your business and for the people who have come to love what it is that you do.”

Fifth-generation winemaker and artist Darcie Kent transformed the experience at her namesake winery by using the shutdown to make improvements and adjustments that accommodate different comfort levels for guests.

“When COVID hit last March and we were shut down, we lost 95% of our business immediately and so did almost every other winery in Livermore. And it’s had a dramatic effect on all of us. Several wineries had to drop out of the (Livermore Valley Winegrowers Association), had cash-flow issues; several wineries have closed their doors permanently,” she said. “We had to find a way to survive.”

Kent said that their biggest pivot was transitioning their tasting experience to primarily outdoors.

To make the switch, they created a tasting “Terrace & Green” in an area on the property that was used for concerts pre-pandemic. They also offer a space on their pepper tree lawn where people can bring their own food and picnic items and order wine by the bottle or glass.

For days when the weather is not conducive to being outside, they’ve renovated the historic purple barn on the property that was built more than 100 years ago, which is now open up to 25% capacity as another area for tasting.

The Darcie Kent brand has also launched the Almost Famous Wine Company as part of their philanthropic initiative. “Each one of the wines has a charity that the proceeds go to,” Kent said.

As they gear up to officially introduce the new brand to the public, the former Darcie Kent indoor tasting room will become the Almost Famous Wine Lounge. Kent said that being shut down at the height of the pandemic afforded them the time to develop these ideas that allow for a more versatile wine tasting experience.

Similarly, the owners of Purple Orchid Wine Country Resort & Spa took advantage of the downtime to make some upgrades to their property. The luxury bed-and-breakfast caters to tourists and leisure travelers.

Owner Rhiannon Eddy said the entire property suspended operations for about six months last year. When the facility reopened last fall, Eddy said she started to get some local clientele back but didn’t start to see a real uptick in destination travel until earlier this year.

“Since we reopened our spa in February, we’ve found that we are getting guests from out of town, people who are coming back to explore the wine region,” she said, adding that Purple Orchid is particularly unique as the only boutique-style bed-and-breakfast in the city.

“The California Hotel and Lodging Association really did a great job for our industry because before we were even allowed to reopen for leisure travel, they had already developed the guidelines for how to be clean and safe,” Eddy said, adding that her property immediately implemented the protocols outlined by the association when they became available and are still following them.

While about 75% of their clientele comes from within a 45-mile radius of Livermore, Eddy said the other 25% that come from outside of the Bay Area are making their way back. The property also operates as a wedding and special event venue, which they’ve started hosting again in April after postponing more than 25 weddings last year.

At the height of the pandemic, Eddy said that laying off her staff was particularly painful for her. “We operate like a family environment here, so to lay off our team that were really counting on our operation for their employment was really hard,” she said. “It was definitely an emotional undertaking,” she added.

Eddy said that now that conditions are improving, she is optimistic about the future of the Livermore Valley’s wine and hospitality industry.

“Everybody’s excited to be back open and to be welcoming guests,” Eddy said of the region. “I really believe we’ve all created a very safe environment for people to gather again, so overall I’m very satisfied with the way things are moving forward.”

Home Videos The WORLD of WINE – Wine News. Cheap wine, tasting notes and cooking with wine The World of Wine – May 2021 … END_OF_DOCUMENT_TOKEN_TO_BE_REPLACED

How to visit Napa Valley on a Budget. In this video Carson and I explain a few ways to enjoy Napa on the cheap. Tip and advice about how to visit Napa … END_OF_DOCUMENT_TOKEN_TO_BE_REPLACED

Home Videos Get To Know Argentina Wine | Wine Folly If you love Malbec, Argentina is your ultimate wine region. But that’s not … END_OF_DOCUMENT_TOKEN_TO_BE_REPLACED