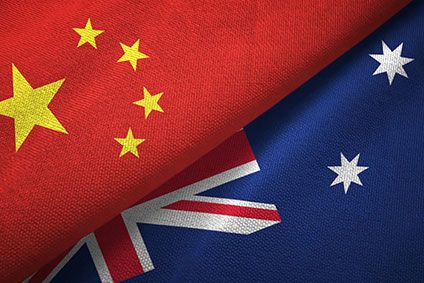 Australian wine exports to mainland China dropped to near zero in December as new tariffs cut off trade channels to the important East Asian market.

China implemented the tariffs on Australian wine in November

In November, Chinese authorities surprised Australia’s wine industry by slapping substantial trade tariffs on bottled wine imports from the country. The tariffs, which range from 107% to 212%, almost immediately priced Australian wine out of the market in China, according to analysts.

The declines stand in contrast to other important Australian wine markets such as the UK, where export value in 2020 climbed by 29% to AUD456m and volumes increased by 19% to 266m litres.

China remained the biggest value destination for Australian wine in 2020, but Wine Australia warned that exports to the country will remain low in the coming months, affecting total export numbers for 2021.

China overtook the US as the highest value export market for Australian wine in 2016, and has since become even more important after the signing of a free-trade agreement between the two countries that dropped tariffs to zero.

According to figures from Wine Australia released before the tariffs, China accounted for 42% of Australian wine exports by value and about 20% by volumes.

Australian wineries have intensified their focus on Chinese consumers, who are more willing to pay a premium price for Australian reds than consumers in other countries. Wineries including Treasury Wine Estates have directed much of their premium output to China, however this is likely to change this year as companies pivot to other markets.

TWE has said it is considering a number of ways to mitigate losses from the tariffs, including diverting resources to the US and UK. The group may also source grapes from China to use in local production, or use grapes from French vineyards.

Overall, the value of Australian wine exports in 2020 fell 1% because of the Chinese tariffs, according to today’s Wine Australia numbers. There was a 0.5% increase in volumes to 747m litres and a 1% decline in average price to AUD3.87 per litre FOB.

What’s coming up in wine in 2021? – Predictions for the Year Ahead

Home Videos The WORLD of WINE – Wine News. Cheap wine, tasting notes and cooking with wine The World of Wine – May 2021 … END_OF_DOCUMENT_TOKEN_TO_BE_REPLACED

How to visit Napa Valley on a Budget. In this video Carson and I explain a few ways to enjoy Napa on the cheap. Tip and advice about how to visit Napa … END_OF_DOCUMENT_TOKEN_TO_BE_REPLACED

Home Videos Get To Know Argentina Wine | Wine Folly If you love Malbec, Argentina is your ultimate wine region. But that’s not … END_OF_DOCUMENT_TOKEN_TO_BE_REPLACED