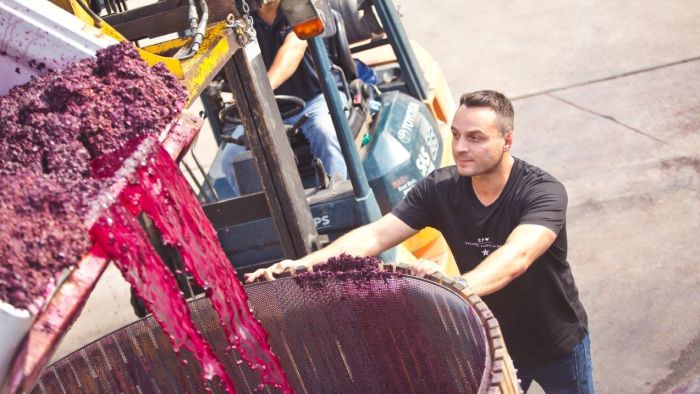 There are concerns the closure of Australia’s border and subsequent loss of many international students could have a trickle-down effect on Australia’s wine industry.

Calabria Family Wines in the New South Wales Riverina exports wine to China and said travel bans had hit the tourism industry hard with the loss of money coming into the economy and the chance to market to visitors, particularly university students.

“Chinese students come to Australia and often live here for three or four years and develop our way of life and drinking habits,” Sales and Marketing Director Andrew Calabria said.

He said red wine had been popular in China for some time, but students often developed a taste for other Australian wine varieties.

“They’re taking back the message of Australian wine and that it isn’t just about red wine, it’s about other varieties such as sauvignon blanc or moscato and it’s really good value and suits their cuisine,” he said.

“It’s a longer-term play, but it’s an important part of building the Australian wine image in China as well.

The Federal Government had indicated the nation’s border is likely to stay closed until 2021 but plans are underway to start returning international students to two major universities next month.

Director of the Wine Economics Research Centre at the University of Adelaide Kym Anderson said Australia had been badly affected by the loss of Chinese tourists in general.

“Chinese make up a large proportion of our foreign tourists and a lot of those tourists do spend time in wine regions and visiting wine cellars and acquiring a taste for Australian wine,” Mr Anderson said.

“Those who come here to learn about wine marketing go back and are ambassadors for us in that way as well.”

China has placed an 80 per cent tariff on Australian-grown barley and there are concerns the wine industry could be targeted next.

“Many Australian wineries have built solid markets over the last decade in China,” Mr Calabria said.

“We just have to keep up with the marketing efforts and just hope these macro forces don’t lead to wine being picked on as one of the products the Chinese want to target,” Mr Anderson said.

“One hopes this is going to blow over and not be a long-term issue between Australia and China.

“The market prospects for China are so enormous that we just can’t afford to walk away from that market.”

Home Videos The WORLD of WINE – Wine News. Cheap wine, tasting notes and cooking with wine The World of Wine – May 2021 … END_OF_DOCUMENT_TOKEN_TO_BE_REPLACED

How to visit Napa Valley on a Budget. In this video Carson and I explain a few ways to enjoy Napa on the cheap. Tip and advice about how to visit Napa … END_OF_DOCUMENT_TOKEN_TO_BE_REPLACED

Home Videos Get To Know Argentina Wine | Wine Folly If you love Malbec, Argentina is your ultimate wine region. But that’s not … END_OF_DOCUMENT_TOKEN_TO_BE_REPLACED