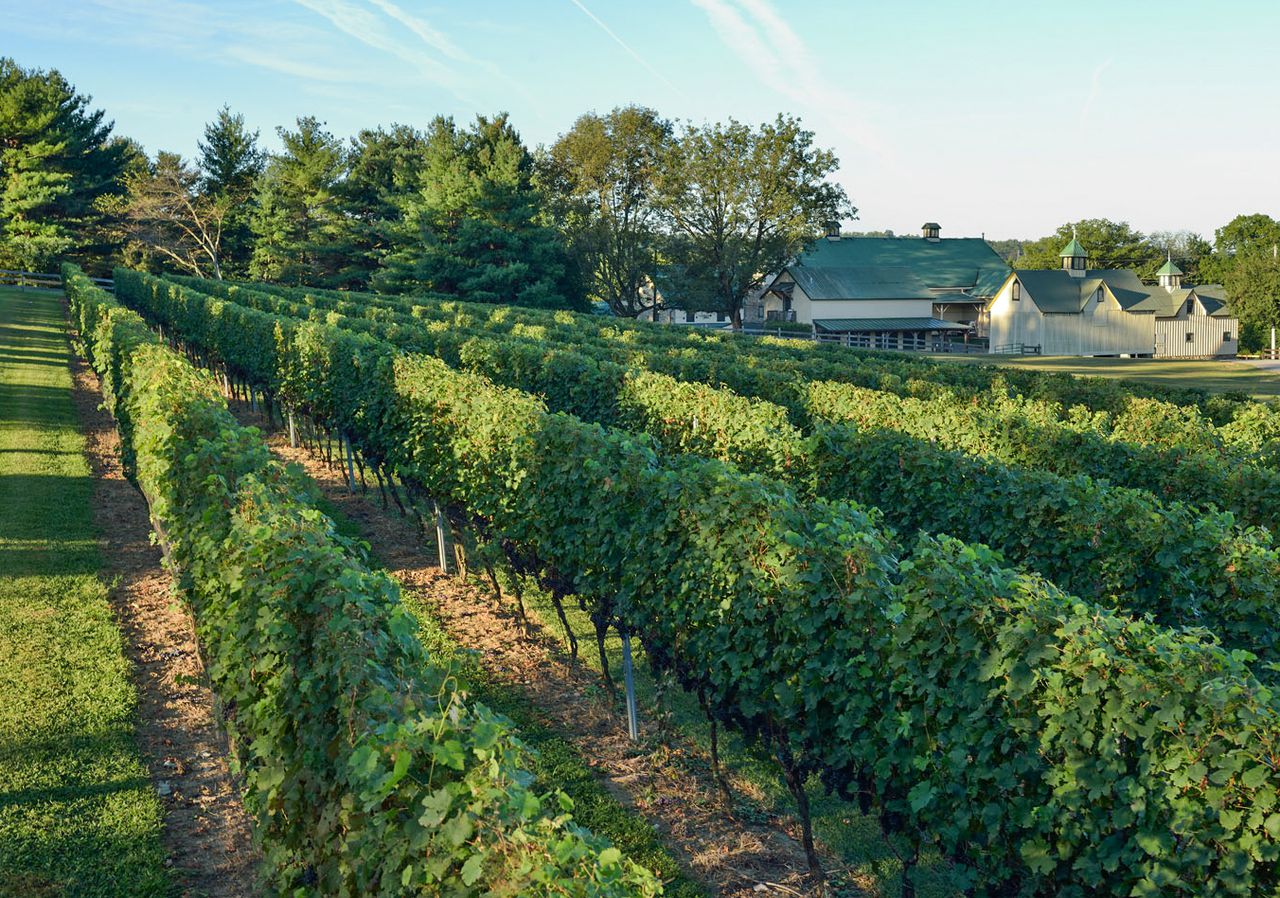 This was to be the year that Boordy Vineyards in Hydes, in Maryland’s Baltimore County, would enhance its already elevated profile among regional wine consumers by combining a series of small events with a fall gala and a social-media and marketing blitz to celebrate its 75th anniversary.

Amid the closures and restrictions, the oldest winery in Maryland and among the oldest still operating on the East Coast has wound up with “a very modest recognition” of a milestone birthday, said Rob Deford, the owner and president. The Eastern Winery Expo recognized Deford and Boordy with its Lifetime Achievement Award in early March, at the onset of the pandemic.

A week later, Boordy and other wineries around the state closed, and Deford said that “we began to wonder whether there would be a company left.”

Instead, “our sales began to take off in the stores, our internet sales went up like 4000 percent, of course, that’s from very low numbers, but we did in a month what we normally would do in a year or more and continued that way.” Wine sales at the winery, he added, “are slightly ahead of where they were last year when we could hold big events.”

By now, heading through harvest and toward the holidays, it would appear this difficult year might be as much a mirror for the Deford family as a spotlight on its historic property and quality wines. “It tells me that other wineries will say the same thing locally, that there’s a real following now for local wine,” Deford said about what they have seen since March. “I’d say after 75 years is what we have is a very strong, resilient brand that has withstood all sorts of adversity over the years, all sorts of setback, plus successes, many many successes, and the result is that we have this resilience that is carrying us through the strangest year we’ve ever had.”

Located a half-hour from downtown Baltimore, the winery operates amid a picturesque setting, the centerpiece a 19th century fieldstone barn sitting at the end of a driveway that takes customers past one of its several vineyards.

Maryland’s first winery was started by Philip Wagner, one of the heavyweights in America’s wine history, and his wife Jocelyn. Wagner worked for the Baltimore Sun for almost 35 years, replacing the immortal H.L. Mencken as editorial page editor in 1938. While he managed that side of his career largely as an editorial writer, according to his obituary in the New York Times, his interest in wine increased to a point where he and his wife opened the winery in 1945 while also managing a nursery by the same name. He’s best known for introducing and pushing the use of French American hybrids such as Seyval, Vidal and Chambourcin in America, a philosophy that led to some infamous public scraps with Dr. Konstantin Frank, who was making his own mark on the industry in New York State.

For a time, the Deford family supplied Wagner with grapes, but that association led to an interest in a much more involved investment.

Lucie Morton is a consulting viticulturist who has had a hand in the planning and development of some of the East Coast’s top wine producers, including Boordy. Her familiarity with the winery began with Wagner, from whom her family bought grapevines, and she said when Deford came to her in 1979 asking for advice on whether his family should buy the winery, she said that he shouldn’t. “I said he doesn’t have anything to sell. His cellar has some really decrepit equipment and his business was based on sort of his persona,” she recalled recently. “I told him not to, which we laugh about to this day.

“Anyway, he did buy it and it turned out really well and, of course, if anybody could do it, it would be the Defords because they are so deeply rooted in historic preservation and everything and don’t kind of bounce around with the latest fads, etc.,” she said.

Deford said that one of the things he wanted to achieve when the family purchased the winery in 1980 was “to make it more about the wine than the personalities involved, and I think it’s finally arriving at that stage,” he said. “It has taken years. There was that whole period where you sort of how to be a plate spinner, a fire eater to get attention, and it was more about the personalities than the wine you were making.

“I think now our region is becoming known for good wine. Granted, we have a long way to go. A long long way to go, but I think the quality is ahead of the reputation. I noticed, back when Philip Wagner and Konstantin Frank were trading barbs, I was frustrated with that because I thought, this is just a distraction. Let’s find the right grapes and make the right wine, and that’s kind of been my emphasis ever since, that and building a collaborative industry.”

Today, Boordy is producing around 85,000 gallons of wine, with that divvied up among its Chesapeake Icons and Landmark Series lines and its Sweetland Cellars brand of party, or introductory, wines that took several years to find an audience in a crowded marketplace. “We took a major body blow when we did that,” Deford said of the creation of the second brand. “What’s really funny. that brand is roaring back. We’ve done two package changes to it and we’ve also improved the product. it is now really growing strongly. We were almost ready to say last rites over it.

Like some of the state’s other top producers, its wine club is thriving, with customers committing to receiving three wines from its top-flight Landmark collection four times a year.

It’s the Landmark wines – Albarino and Chardonnay Reserve to delicious red blends such as Landmark Reserve and Lost Order No. 191 – that have helped Boordy turn the final corner thanks to the Deford family, as Morton said, making “a huge commitment on following through to making super quality wines.”

That Landmark Project included the construction of a state-of-the-art winery that opened in 2013 amid a replanting of its South Mountain vineyard, located around 80 miles to the west. Morton said that Deford approached her more than 10 years ago. “He said I’ve got the business going and I have three levels of wine, and he had seen the work I had done at Back Ankle and Sugarloaf [Mountain], Boxwood, some of the smaller projects I kind of had gotten myself into, and he said, ‘I see that as the future in the vineyard.’”

It is land – located on the southeast shoulder of the Blue Ridge Mountains – that has made history already, home to several skirmishes between the Union and Confederate armies that preceded the battle at Antietam in September 1862. Today, those grounds are part of Boordy’s 47 acres under vine, home to a variety of white (Chardonnay, Albarino, Viognier) and red (Cabernet Franc, Cabernet Sauvignon, Merlot, Petit Verdot, Syrah) vinifera that go into the Landmark wines.

“We really feel that what is going on inside the bottle has been evolving in a very positive way,” Deford said. “The Landmark project, which involved replanting all the vineyards, building a new winery the result of all that investment and thought has been stunning. We hear about it from customers, shocked at the sort of the quantum leap that the brand has taken, and in competitions, we have started getting awards we’ve never seen before.”

They also are hitting price points reserved for premium wines; five of Boordy’s are listed at $45 or more, in the ballpark when you compare those to what the best wines from some top East Coast wineries are fetching. “The most expensive and scarce wines will never represent, in terms of gallons, a great segment of the market,” Deford said. “What they do indicate, they’re the halo over the market. They confer a kind of reputation that it’s incredibly hard to make really good wine, beginning with everything that goes into it where do you even want to start? Is it the selection of the land, the selection of the clones, the planting and maintaining of the vineyards for umpteen years before you even get a crop and then it’s the vinification, the aging in the bottling. The aging in the bottle. It’s very expensive to do the job right. [Plus] you have to leave a lot of the crop behind because you have to be selective, etcetera. So we’re not overcharging, What we’re basically asking is that people give us a chance to compare us to wines of comparable price, which we do here, by the way, from anywhere in the world.”

So what’s ahead? The pandemic prompted a switch from the traditional tastings to flights, four in all that each encompass five wines. It is, Deford notes, a permanent change. Boordy’s entertainment schedule, at least what has been permitted under the restrictions, has switched to free, more intimate events, utilizing the talents of local musicians. “These are things we would never have done without the prod from COVID to change our business model,” Deford said.

They are working on a rebranding of their Icon and Landmark lines, scheduled to be introduced next year (“I think that those new labels will sort of bring us up to the present and beyond with how we feel about the wines,” Deford said.)

As for the grounds themselves, Deford said they are planning major improvements to the historic buildings on the property. Several were built close to 200 years ago, and the 240-acre farm dates back to 1725. “So there’s a lot of tradition and the farm is in permanent conservation, so whether it’s us or someone else, it will always be open, which I’m particularly proud of,” he said. “I love the thought that no one can do harm to this land because of that conservation easement.

“It’s a big investment, but that’s all part of it,” he said. “Our roots are deep, we’re here to stay. We have a strong allegiance to our state, our community and our region, and our actions, we hope, match our words.

Home Videos The WORLD of WINE – Wine News. Cheap wine, tasting notes and cooking with wine The World of Wine – May 2021 … END_OF_DOCUMENT_TOKEN_TO_BE_REPLACED

How to visit Napa Valley on a Budget. In this video Carson and I explain a few ways to enjoy Napa on the cheap. Tip and advice about how to visit Napa … END_OF_DOCUMENT_TOKEN_TO_BE_REPLACED

Home Videos Get To Know Argentina Wine | Wine Folly If you love Malbec, Argentina is your ultimate wine region. But that’s not … END_OF_DOCUMENT_TOKEN_TO_BE_REPLACED