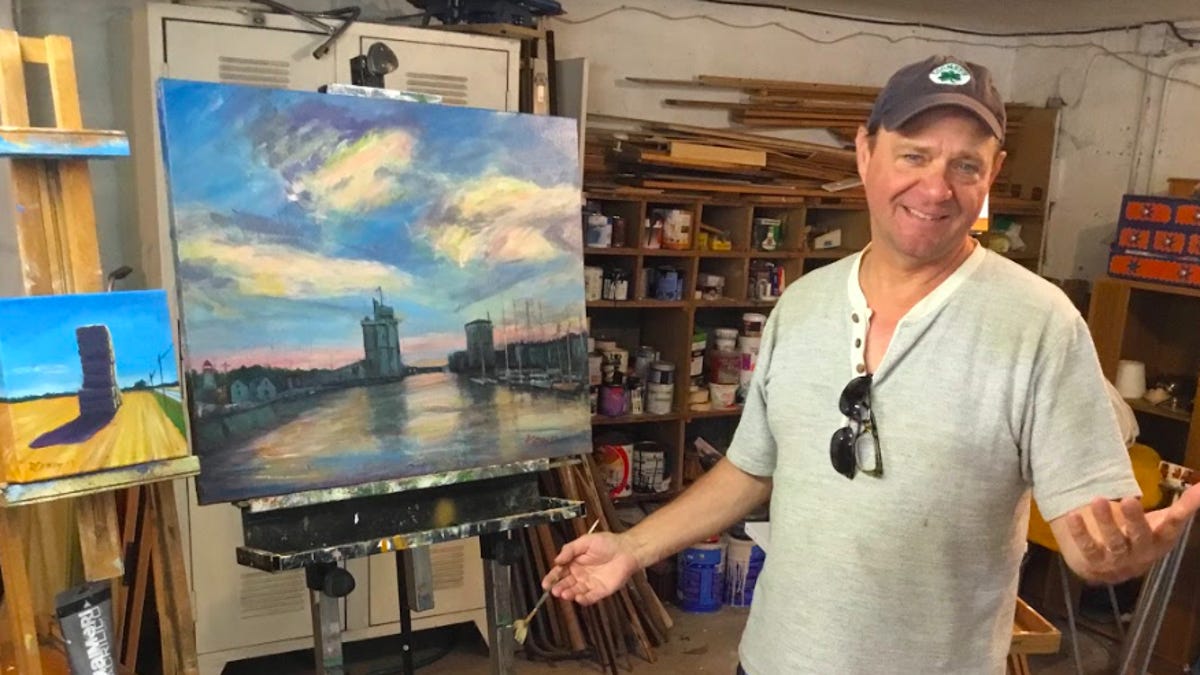 It’s easy to get lost in a crowd.

SouthCoast painter Dan Cooney learned that at an early age. As the second child of eight children, all born within a twelve year span, he instinctively grasped for something that  distinguished him from his siblings. What he reached out for — and clung onto — was art.

His mother was a writer who stocked the dining room table with stacks of paper and a box of crayons, pencils and paint. As soon as breakfast was done, Cooney would be there, getting lost in that dream zone of childhood creativity, making one drawing after another.

Sometimes, he would be given a subject prompt by his mom, such as “happiness is…” and his response would be a pile of colorful drawings in an attempt to illustrate just that.

Cooney remembers enjoying the attention of Mrs. Volkswen, an elementary school teacher, and the “office ladies,” who were enchanted by his drawings. It was attention that was sparse in a home with so many siblings. He found a way to stand out.

Cooney was born in Gardener and his family moved to New Bedford when he was seven. At the age of ten, his father signed him up for Saturday morning art classes at the Swain School of Design.

With the encouragement of his parents, he would return as a freshman college student, jumping right into the school’s foundation program, which embraced life drawing, two- and three-dimensional design, color theory, art history and the Western literary canon.

Exposed to all of the four major concentrations Swain then offered — painting, printmaking, sculpture and graphic design  Cooney became an accomplished draftsman and painter.

But ultimately, he opted to major in graphic design, with the understanding that a sharpening of the skill set needed in that particular field would further strengthen his painting. It would also provide a channel to the business world and greater occupational opportunities.

Cooney received his BFA in 1981 and his first graphic design job was in the advertising department in the now long-defunct Mars Bargainland department stores. Additionally, he began to do freelance design work for a bevy of clients that included WSAR/WPRO, Center Jewelers, Luzo Bank, Whaling City Cable Television, and the City of New Bedford.

In the early 80s, Cooney shared an apartment with painter George Guavin, who became a close friend, mentor and major influence on his life. Cooney moved to San Francisco in 1984, (where he took art classes at a number of Bay Area colleges, culminating with an MFA from  the University of California, Berkeley in 1989). Gauvin moved to Paris in 1986 and Cooney was invited to visit him in France.

That casual invitation would be fateful. On the way to Europe, Cooney had stopped to see another friend in Iceland, and met a woman on the plane to Luxenberg.  Due to late arrivals and a missed train connection, they ended up as traveling companions for eleven hours, sharing planes, trains, buses, meals and music (his Tom Waits, Talking Heads and U2 and her classical works.)

Over the years, Cooney had a brief stint as Communications Director of Curry College, and worked as an adjunct professor of art at both Bridgewater State University Massasoit Community College. In 2008, Cooney and his wife Christine entered a different kind of partnership when they founded Heavenly Spirits, LLC.

And through it all, Cooney has continued to paint and engage in other visual arts, including sculpture and pinhole photography.

His creative process is often in flux, conintually evolving, with regard to style, subject, content and form. The transitions are brought about by circumstance, current interests or his “actual need.”

In Cooney’s opinion, the emphasis at Swain was to remain focused and continually “refine a specific cohesive and consistent visual language…and stick to it.” Acknowledging the obvious rationale behind that approach, he feared being enslaved to it.

He prefers the advice offered by Joan Brown, one of his professors at Berkeley:

“Find a bone to chew on, then stay with it, at least until you reach the marrow. When you’ve   gotten all you can out of it, then you move on to another challenge.”

The success of Heavenly Spirits has allowed the Cooneys to purchase an old vineyard farm property in the Cognac region of France.  Under renovation, they hope to transform it into an artist retreat and study center by 2022. Beyond being a place where their American clients could mingle with the French spirit producers, they would like it to be a haven for creative folk to visit and relax and recharge.

Home Videos The WORLD of WINE – Wine News. Cheap wine, tasting notes and cooking with wine The World of Wine – May 2021 … END_OF_DOCUMENT_TOKEN_TO_BE_REPLACED

How to visit Napa Valley on a Budget. In this video Carson and I explain a few ways to enjoy Napa on the cheap. Tip and advice about how to visit Napa … END_OF_DOCUMENT_TOKEN_TO_BE_REPLACED

Home Videos Get To Know Argentina Wine | Wine Folly If you love Malbec, Argentina is your ultimate wine region. But that’s not … END_OF_DOCUMENT_TOKEN_TO_BE_REPLACED