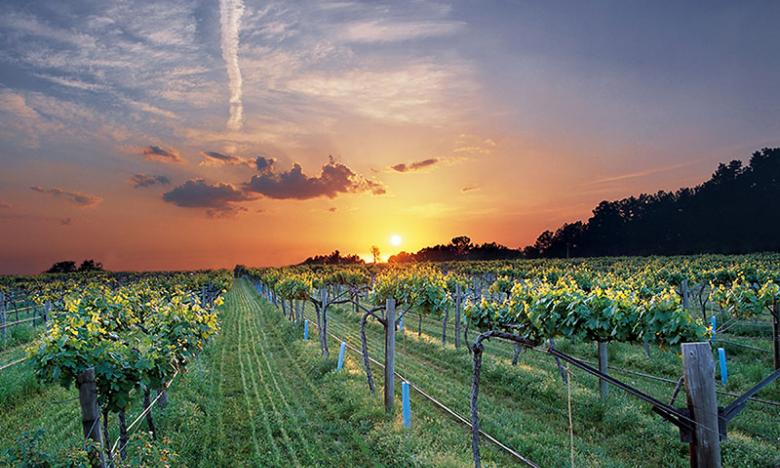 Arkansas’ wine industry has two new wine grape varieties. The University of Arkansas System Division of Agriculture is offering new commercial options that are adapted for growing in Arkansas vineyards.

Indulgence is a white wine grape that produces wines with a muscat flavor, said John Clark, Distinguished Professor of horticulture and fruit breeding for the Arkansas Agricultural Experiment Station, the research arm of the Division of Agriculture.

Dazzle is a pink grape that produces a white Gerwürztraminer-type wine, Clark said. Threlfall said it has a spicy aroma in addition to the floral, fruity and herbal aromas.

Indulgence and Dazzle expand options for commercial production in Arkansas and other areas with similar growing conditions. Threlfall said both grapes can produce single-varietal wines or can be blended with other wines to enhance their flavors or aromas. Clark said the original crosses to produce these grapes were made by the late James N. Moore, who founded the Arkansas fruit breeding program in 1964.

“Many Mid-South, Midwest, eastern U.S. and Arkansas wineries are using French-American hybrids, or wine grapes developed in New York that are not ideal for Arkansas,” Clark said. “Dr. Moore’s aim was to develop good quality grapes with substantial flavor that could grow in Arkansas’ environmental conditions.”

Moore worked with the late Justin Morris, a division food scientist who specialized in viticulture and worked on vineyard management and winemaking for Arkansas. Their partnership lasted many years and continues today in the hands of Clark and Threlfall, who began their careers in Arkansas under Moore’s and Morris’ mentorship.

“Soon, wine enthusiasts can purchase bottles of Indulgence and Dazzle wines, not only to enjoy the unique aromas and flavors, but also for the experience of drinking these wines made from grapes developed in Arkansas,” Threlfall said. “Imagine drinking a wine that was made in Arkansas, with grapes grown in Arkansas, and that the grapes for the wine were bred in Arkansas.”

The average harvesting date for Dazzle is Aug. 15, Clark said. Indulgence ripens about Aug. 14. Both grapes have endured winter temperatures down to 1 degree Fahrenheit without damage to canes or buds, he said.

Powdery mildew was seen on Indulgence in four out of 26 years of observation for disease and in two out of 22 years on Dazzle, Clark said. Downy mildew was not observed in either grape, even in heavy years for the disease. Black rot and anthracnose also were not observed. Fungicides were used in research vineyards and these varieties will need disease control similar to most bunch grapes.

Home Videos The WORLD of WINE – Wine News. Cheap wine, tasting notes and cooking with wine The World of Wine – May 2021 … END_OF_DOCUMENT_TOKEN_TO_BE_REPLACED

How to visit Napa Valley on a Budget. In this video Carson and I explain a few ways to enjoy Napa on the cheap. Tip and advice about how to visit Napa … END_OF_DOCUMENT_TOKEN_TO_BE_REPLACED

Home Videos Get To Know Argentina Wine | Wine Folly If you love Malbec, Argentina is your ultimate wine region. But that’s not … END_OF_DOCUMENT_TOKEN_TO_BE_REPLACED