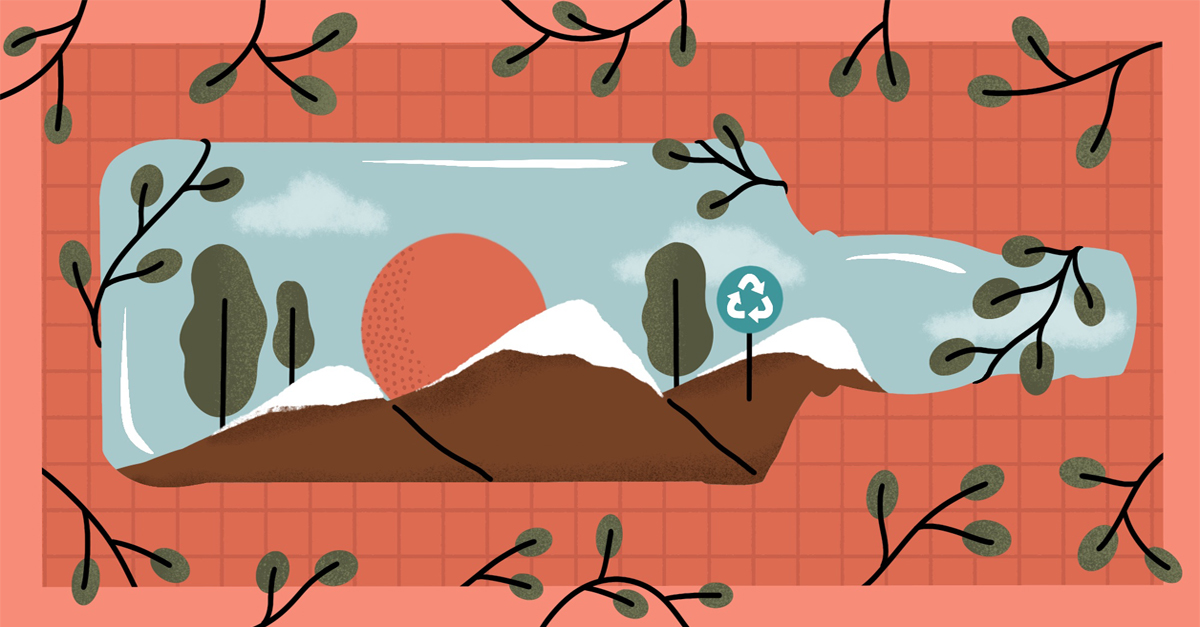 When shopping at liquor stores or touring vineyards, breweries, and distilleries, consumers are often told about the terroir of a wine or spirit. We ask questions about vineyards’ sustainability and distilleries’ and breweries’ energy-saving systems. We buy bottles knowing that it matters where the liquid inside them is from and how it is made. But how much do we know about the bottles themselves?

When it comes to the packaging of our favorite drinks, the options are extremely limited; almost all wines and spirits are sold in glass bottles while a small portion are sold in plastic packing. Beer, on the other hand, is mainly sold in aluminum cans, with 30 percent bottled in glass. But, as is the case with most industries at this somewhat critical time, the environmental impact of alcohol packaging is increasingly top of mind, and some innovators are working to change the standards of their trade — and trying to save the environment in the process.

The Problem With Glass

27.5 billion glass bottles are manufactured in the United States every year — 80 percent of which are made specifically for beverages. And while many consumers may think glass is an eco-friendlier option, especially compared to plastic, the reality is that producing, distributing, and even recycling the material is environmentally very costly. All glass is made from 100 percent silica sand, which is sourced from the bottoms of oceans and rivers and has high silicon dioxide content. Because it is difficult to source — and because it is used for everything from concrete to wine glasses — the world’s ever-growing population will experience a silica sand shortage in two to four decades, before the world is predicted to run out of fossil fuels.

Producing glass bottles not only uses finite resources, but also a massive amount of energy. Sand has to be heated to around 2,000 degrees Fahrenheit to be melted into glass. And at glassmaking plants, machines run all day, every day, making for a carbon footprint that’s likely considered unsustainable for the environment.

Wine bottles alone accounted for 8 percent of all glass packaging in 2017, and 42 percent of these bottles are exported across borders around the world. “When a bottle of glass is manufactured, it goes from the factory to the wine producer. The wine producer fills it and sends it all over the world, and then it’s bought by a user who drinks the wine. Then 70 percent of this glass is recycled. And this 70 percent has to travel back to a factory, where it will be melted again,” says James de Roany, CEO and president of Green Gen Technologies. With each wine bottle weighing between 0.77 and 2.5 pounds, this transportation process requires a significant amount of energy and produces significant carbon emissions. 12-ounce beer bottles, in comparison, weigh around 0.4 pounds, require less glass, and have a much smaller carbon footprint than that of wine and spirit bottles.

Although glass can be recycled, “you have to add another 30 percent of new sand in order to recycle it,” de Roany adds. With an already scarce material, such methods may not be possible for long. So while glass bottles have up until now been the standard for alcohol, de Roany has come up with a more sustainable plan.

Along with his team at Green Gen Technologies, de Roany has created a bottle made entirely out of flax seeds that are turned into thread, woven into fabric, and cooked down at low temperatures with bioresin. The result is an extremely light and strong material that can be transported more easily, for a lower cost, and expends fewer carbon emissions than glass.

When kept in a warm place, these bottles fully degrade into the earth in a matter of two to three years. And when broken into smaller pieces and composted, they can decompose in months. But when kept in a cool, dry place, the bottles — and the liquid inside them — can last for up to 10 years. (Modern-day glass bottles, on the other hand, take about 4,000 years to decompose.)

Creating this flax material requires 10 times less energy than glassmaking — a figure that’s impressive in and of itself. But de Roany has bigger goals: to have a carbon footprint that’s actually negative — meaning that the process used to make the material would be removing more carbon dioxide from the environment than it adds.

Bottling wine in flax comes with its own set of issues, though. First, the material is extremely expensive, costing six to eight times more than traditional glass bottles. That means Green Gen Technologies is geared only toward extremely high-end wine and spirits brands that can afford the material. Second, since the flax bottles are designed to biodegrade, they’re not suitable for wines that are meant for decades-long cellaring.

Still, de Roany says that Green Gen has recently signed a contract with one of the largest wine and spirits companies in the world (though he is not legally allowed to disclose which one) for which he will be creating bottles from his patented flax material, and more and more brands are following suit. “People are extremely open minded. We have had hundreds, if not thousands of requests. People are really committed to change things,” he says. Glass Replacements and Beyond

In fact, just this past October, Bacardi revealed its plans to release a bottle made entirely of plant materials. Hitting shelves in 2023, the bottle is made from palm, canola, and soy seeds, and Bacardi claims it can biodegrade in just 18 months. And while glass bottles will continue to be the primary packaging for the spirits conglomerate, it plans to use the plant-based material to replace all the plastic bottles across its 200 brands (including its marquee spirits like Grey Goose vodka, Patrón tequila, Bacardi rum, and Bombay Sapphire gin), a change that will save up to 2,500 tons of plastic each year.

And biodegradable packaging doesn’t stop at plant-based bottles. From edible 6-pack rings aiming to save ocean life, to a sustainable gift bag alternative made from paper pulp, brands are getting creative and demonstrating a commitment to reversing the effects of climate change — a cause that is shaping the shopping habits of an increasing number of consumers.

De Roany has even developed spirit bottle caps made from olive pits, oyster shells, and grape residue rather than plastic, as well as drinking glasses made from flax and bamboo materials.

While these small changes have the potential to significantly impact the environment, the reality is that we may not see their effects for years to come. Despite developments in finding alternatives, glass and plastic remain the industry standard, and with their lower costs and production times, it’ll likely be long before the majority of the drinks industry will get on board with going 100 percent biodegradable. And while biodegradable materials are ultimately less costly to the environment, they’ll likely put a larger dent in consumers’ wallets, as higher packaging prices will necessarily lead to increased retail prices for our favorite bottles.

Despite all this, there’s hope on the horizon, and a future with biodegradable options at every liquor store and bottle shop is not entirely out of sight. What that future means for the supply chain remains to be seen, but for environmentally conscious consumers, it’s a step in a more sustainable direction.

This story is a part of VP Pro, our free content platform and newsletter for the drinks industry, covering wine, beer, and liquor — and beyond. Sign up for VP Pro now!

Home Videos The WORLD of WINE – Wine News. Cheap wine, tasting notes and cooking with wine The World of Wine – May 2021 … END_OF_DOCUMENT_TOKEN_TO_BE_REPLACED

How to visit Napa Valley on a Budget. In this video Carson and I explain a few ways to enjoy Napa on the cheap. Tip and advice about how to visit Napa … END_OF_DOCUMENT_TOKEN_TO_BE_REPLACED

Home Videos Get To Know Argentina Wine | Wine Folly If you love Malbec, Argentina is your ultimate wine region. But that’s not … END_OF_DOCUMENT_TOKEN_TO_BE_REPLACED