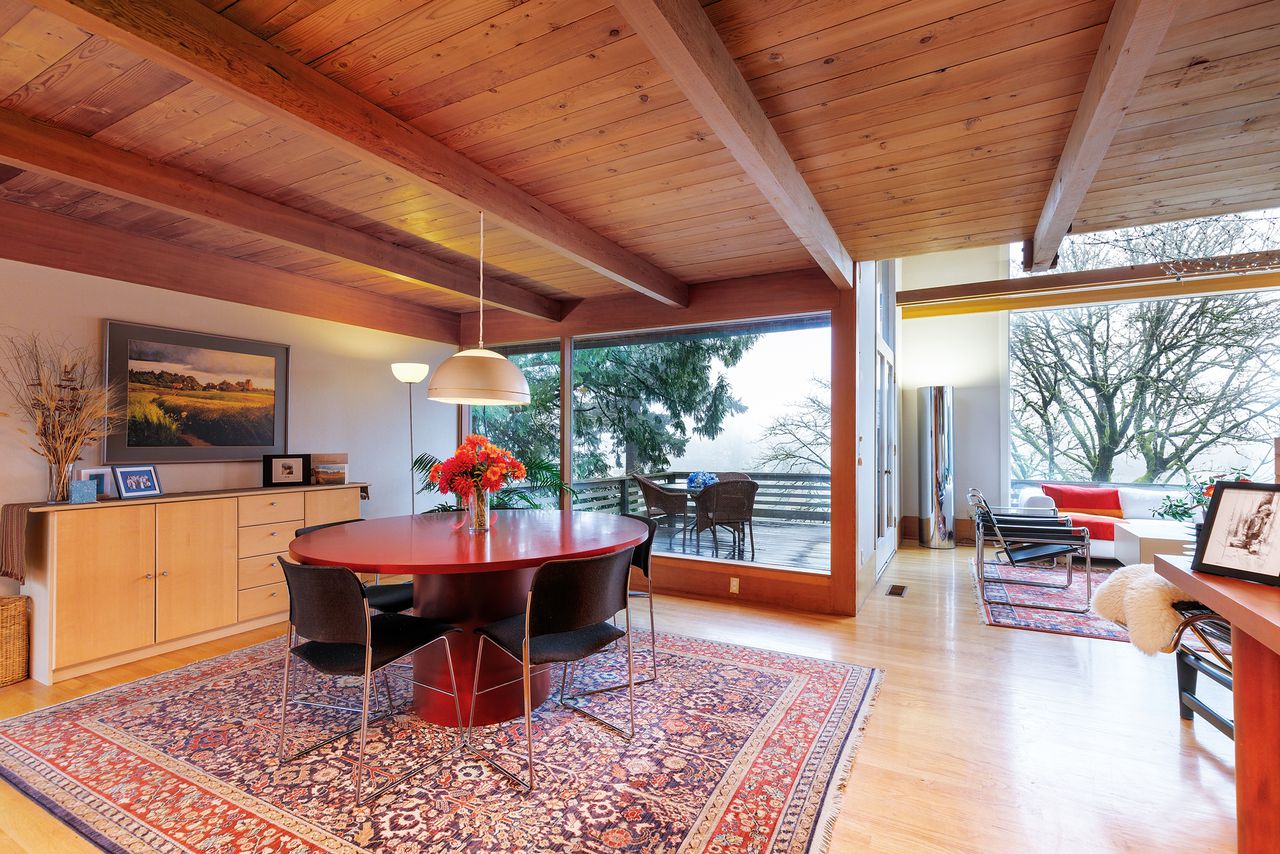 Architect John Storrs knew how to draw attention to his work. Throughout his storied career, the late designer of Salishan Lodge in Gleneden Beach and other famous properties saw his projects profiled in national publications.

He was also successful in laying out handsome midcentury modern homes using raw cedar siding, Douglas fir paneling and other unpainted and textured wood that he saw as an “understandable, romantic material.”

Today, appreciators of the Northwest modern aesthetic covet his dwellings that showcase vaulted ceilings and towering glass in the living room and cozy bedrooms.

“We had 91 realtors with clients go through the house, starting at 9 a.m. on Monday with the final appointment at 4:30 p.m. on Friday,” says listing agent Kerry Zariwny of John L. Scott Real Estate. “By Friday night, we had 16 offers.”

There are also two accessory dwelling units (ADUs): A one-bedroom unit and a studio.

Floor-to-ceiling windows in the main house were carefully placed on the sloping lot to frame views of Mount Hood, Mount Adams and Mount St. Helens and the surrounding valley.

“This home is the epitome of living in the Pacific Northwest,” says Zariwny. “Mr. Storrs situated the house so that once you step inside you seem to be surrounded by trees and nature so it almost feels as though you are living in a beautifully designed treehouse.”

In the November 1960 edition of Sunset magazine, Storrs was praised for keeping costs down on a “carpenter’s house” by employing simple detailing, natural finishing “and ideas.”

Connecticut-born Storrs earned a master’s of architecture degree at Yale University in 1949 and crossed the country five years later, inspired by revered architect Pietro Belluschi, who lectured at Yale about Portland’s take on modern design.

“Once here, John readily embraced and mastered the architectural language, such as the expansive use of wood and glass, of Pacific Northwest midcentury modernism in his projects,” says Belluschi’s son, architect Anthony Belluschi. “Storrs was responsible for numerous well-respected buildings and many wonderful homes.”

Storrs’ signature elements are evident in most of his 80 residential projects: Large living rooms and high, wood-planked ceilings open to beckoning outdoor spaces, and banks of windows frame views of trees or the horizon, not the neighbor’s house.

Despite the feeling of spaciousness inside, his homes tended to have a low profile to relate to the natural setting.

Zariwny says this is evident at the Milwaukie house, which has almost 3,000 square feet of living space.

“The current owners have really loved living in this house for the past 18 years,” says Zariwny. “He is a retired architect and was immediately drawn to the home and its architectural integrity while his wife fell in love with the views and the natural light the home offers.”

The open space has allowed the longtime owners as well as their grown eight children, spouses and grandkids to gather in the past for holidays and family dinners, says Zariwny.

Who would love the house? “Everyone who has visited the house, whether at dinner parties, family gatherings or simply a neighbor dropping by, has loved the house,” says Zariwny. “Honestly, there is a lot to love about this home.”

Home Videos The WORLD of WINE – Wine News. Cheap wine, tasting notes and cooking with wine The World of Wine – May 2021 … END_OF_DOCUMENT_TOKEN_TO_BE_REPLACED

How to visit Napa Valley on a Budget. In this video Carson and I explain a few ways to enjoy Napa on the cheap. Tip and advice about how to visit Napa … END_OF_DOCUMENT_TOKEN_TO_BE_REPLACED

Home Videos Get To Know Argentina Wine | Wine Folly If you love Malbec, Argentina is your ultimate wine region. But that’s not … END_OF_DOCUMENT_TOKEN_TO_BE_REPLACED