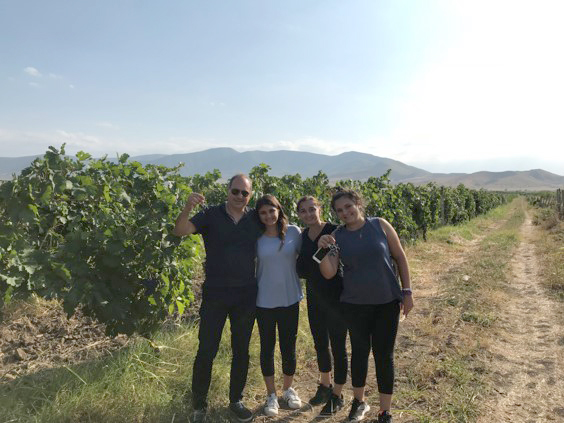 Alex and Talar Sarafian love everything about wine, from its consumption to its production, almost as much as they love Armenia and Artsakh. This passion for viticulture led to the 2005 birth of Sarafian Vineyards.

Alex Sarafian first experienced Armenia as co-director of the Armenian Youth Federation (AYF) internship program in the early years of independence from 1994 to 1996. Life was different in the young republic with economic concerns and issues with electricity, but conditions steadily changed as Sarafian resumed his visits to the homeland as a newlywed in the early 2000s.

As he and his family traveled to Armenia, Sarafian decided in 2005 that he wanted to start investing in the homeland, specifically in the liberated territories of Artsakh. The 15-acre vineyard he established in the fertile plains of the Askeran region in the village of Ughtasar became that first investment in the country…and the place where he and his wife hoped to one day build a home and retire.

Besides other investments in the country, including factories and the Shushi Grand Hotel (now surrendered to Azerbaijan), the wine industry spoke to the Sarafians’ hearts. It takes about three to four years for a vineyard to grow to the point when harvesting may begin, and in 2009 that process began. “Our ultimate goal was to start a winery,” Sarafian told the Weekly, “but the wine industry and its culture in Armenia wasn’t very sophisticated back then.” That is why they initially sold the crop to other wineries or distilleries in the area.

The situation changed dramatically in 2018 when the Sarafians were in Armenia to baptize godchildren. It was during this trip that they noticed how the wine industry had advanced rapidly since the launch of their vineyard. Now, there were about a dozen top notch, high quality wine producers in the country, both diasporan and local. These producers approached wine making as a craft rather than a bulk processing industry—a very exciting time, according to Sarafian. New wine bars, restaurants and a wine-oriented subculture had sprung up, particularly in Yerevan, all very welcoming for the vineyard owners.

The Sarafians decided it was the right time to launch their brand, Aran Wines…and their instincts were correct. Taking baby steps for the industry, Sarafian said they produced about 13-thousand bottles, and that first 2018 vintage sold out. They were the first to produce a rosé wine from the Sireni grape, which sold out in the summer; their red wine was sold out by the end of 2020. Sarafian explained that it takes about two years for a vintage to go from production to distribution. They sell 20 to 25-percent of their wine locally in Armenia with the remaining 75 to 80-percent exported to the United States. Aran Wines are produced and stored in Yerevan, and the Sarafians are looking forward to the arrival of the 2019 vintage, this time 20-thousand bottles.

Aran Wines are produced from the Sireni grape, also known as Khndoghni, indigenous to Artsakh and an excellent full-bodied red grape, “producing a wine powerful, deep and rich in complexity.” The name of the brand pays homage to the long Armenian presence on the lands and was inspired by the legend of the local chieftain (Aran) who was appointed by Armenian King Vagharsh I in the second century AD to be governor of the land between the Arax and Kur rivers. Sarafian explained that the name of these lands, Artsakh, is derived from Aran and the Armenian word for dried woods or forest, tsakh.

As the 2020 harvest was underway at the vineyard, Azerbaijan began 44 days of vicious attacks against Artsakh on September 27, 2020. The Sarafians planned to harvest 20 metric tons of grapes but were only able to reap about 25-percent of that, or five metric tons. As a result, the 2020 special edition Aran Wines vintage will be limited in quantity with an expected 2022 arrival in the US.

November 9, 2020 was the beginning of the end of the Sarafians’ dreams for their vineyard, as Prime Minister Nikol Pashinyan signed away the land. While that agreement was catastrophic, asserted Sarafian, the events that have followed have been disastrous, led by the incompetence of the current administration. “Artsakh lost 70-percent of its arable land,” said Sarafian. The effects of this loss will be devastating to the Armenian economy, since Artsakh was a net exporter of food products to Armenia. “All of the lands that we lost were the fertile areas where it was rich in agriculture,” he further elaborated, with a small percentage of the remaining land in Artsakh being agriculturally productive.

The Sarafian vineyard was in the territory handed over to Azerbaijan shortly after the agreement. “Fortunately, the war didn’t affect our wine-making capability, and we didn’t lose any of our inventory,” said Sarafian. “But what we did lose was the actual vineyard itself.” Initially its fate was undetermined, as the maps shared by Russian peacekeepers led to ambiguity. Many of the Ughtasar villagers would work in the vineyard harvesting the grapes. “These are the people who are gone now,” explained Sarafian. Moreover, they were given “less than 24-hours’ notice from the government that they had to evacuate, even though the government knew for weeks that they [the villagers] would have to go,” revealed Sarafian. “That’s the level of incompetence that we’ve seen day in and day out.”

Sadly, Sarafian told the Weekly that several other wine producers lost their vineyards, their wineries or both, including Kataro Wine in the Hadrut region, Apris Wines and Takri Winery. Kataro Wine was the epitome of winemaking in Sarafian’s opinion, and a winery he aspired to emulate. But they too lost everything with footage appearing on social media recently of Azeris smashing their wine barrels and drinking the wine.

Sarafian expressed deep concern for the future of Artsakh and Armenia, specifically the economy of Armenia and the case of missing prisoners of war, potentially including diasporan Armenians.

In spite of those concerns, Sarafian praised the spirit of Artsakh’s citizens, saying, “Thankfully, Artsakhtsis have a strong and historic tie to the land and are strong-minded people. Many have decided to stay in Artsakh despite everything that’s going on.” While the Sarafians have lost their vineyard, that is not their greatest concern. “Our greater concern is the future of the Armenian nation and the fate of the people who live there, the future of the Armenian presence in Artsakh,” he said.

They may not be able to retire in a home on their vineyard, but the Sarafians plan to continue Aran Wines for 2021 and beyond. “Aran Wines will, fortunately, continue to be made,” Sarafian assured the Weekly. After all, the entire family’s devotion, including their three teenaged children, is to the future of Armenia and Artsakh.

Pauline Getzoyan is editor of the Armenian Weekly and an active member of the Rhode Island Armenian community. A longtime member of the Providence ARF and ARS, she currently serves as chairperson of the local ARS Ani chapter. She also is a former member of the ARS Central Executive Board. A long-time advocate for genocide education through her work with the ANC of RI, Pauline is co-chair of the RI branch of The Genocide Education Project. In addition, she has been an adjunct instructor of developmental reading and writing in the English department at the Community College of Rhode Island since 2005.

Home Videos The WORLD of WINE – Wine News. Cheap wine, tasting notes and cooking with wine The World of Wine – May 2021 … END_OF_DOCUMENT_TOKEN_TO_BE_REPLACED

How to visit Napa Valley on a Budget. In this video Carson and I explain a few ways to enjoy Napa on the cheap. Tip and advice about how to visit Napa … END_OF_DOCUMENT_TOKEN_TO_BE_REPLACED

Home Videos Get To Know Argentina Wine | Wine Folly If you love Malbec, Argentina is your ultimate wine region. But that’s not … END_OF_DOCUMENT_TOKEN_TO_BE_REPLACED