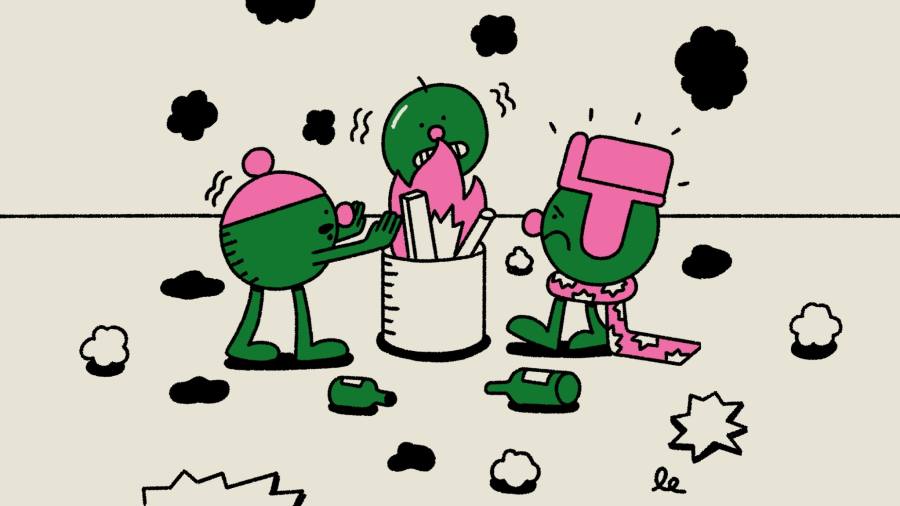 Emilie Faucheron repeatedly brushed away the tears but occasionally broke into sobs as she made a hoarse six-minute video last week reporting on the devastating effect of the spring frosts on Domaine de la Grande Canague, her 60ha wine estate west of Béziers in the Languedoc. She and her husband Benjamin, fourth-generation vignerons, were upset to have lost five hectares of production in the notorious French frosts of 2017, but this year she fears that 50ha of their vines may not make any wine to speak of.

In the video, one of a series she posts on YouTube, she treads the vines trying to process the damage — under a clear blue sky. Which, of course, is the problem: a lack of cloud cover at night invites Jack Frost to do his worst. Faucheron clearly finds it hard to believe that on the night of April 7/8, in the far south of France, temperatures fell as low as minus 6C.

Her vineyards outside the village of Montady are on a pancake-flat plain and therefore perfect targets for frost, which fatally freezes young buds. Whereas in hillside vineyards gravity can pull the dense, cold air downhill, here the coldest air settles straight down on to the vines, though this year higher sites have also been frosted.

The French wine-trade news site Vitisphere reported sub-zero temperatures in much of France for three nights in a row from April 6, with temperatures as low as minus 9C in some regions. And in northern and central Italy, vine growers have been pacing their vineyards just like Faucheron. Their green buds and leaves, which had been pushing forth as heralds of the 2021 wine harvest, are now brownish-grey, shrivelled and lifeless.

These unseasonably Arctic nights in Europe were particularly poorly timed because they followed a period of warm weather when the vines started budding two weeks earlier than the traditional norm. (I hesitate to say “usual” when the climate is increasingly unpredictable.) In some devastated regions, such as Burgundy and Champagne, the extremely cold nights are forecast to continue.

This problem of shorter and shorter winters and earlier and earlier budbreak is leaving young vines vulnerable to frost damage. Many growers are now postponing the winter pruning of the vines as long as possible into spring in order to delay the growing season — particularly for varieties such as Chardonnay that can sprout early.

Many European vignerons were already on their knees, what with drought, hail and the pandemic

It is too early to be precise about just how much of the 2021 crop is lost. Growers will have to monitor the extent to which the vines are able to shoot forth second-generation growth, but this is rarely as fruitful and will ripen later than what has been frozen. It seems clear, however, that these 2021 frosts will be at least as severe as those of 2017 and 1991 in France and 2003 in parts of Italy.

Many European vignerons were already on their knees, what with drought, hail, the pandemic and the period between October 2019 and March 2021, during which the US imposed additional 25 per cent tariffs on a range of wine imports from the EU. French producers have benefited from some state support but they are already demanding another tranche.

In Bordeaux, the best-known wine producers are just about to launch their 2020s in their annual en primeur campaign. The severe frost is not likely to encourage them to moderate their prices. Entre-deux-Mers resident and Master of Wine James Lawther emailed me on April 8 about the frost: “It hit just about everywhere last night and the night before, with temperatures down to minus 4C, buds in advance and very dry conditions. Reports are that it was particularly bad in parts of Margaux, Listrac and Moulis . . . Barsac and southern Graves and low-lying areas of St-Émilion. Vines near me took a hit and according to the viticultrice [local winegrower] had been bien cramées [really screwed up].”

In northern Italy, the vines of the Veneto were basking in temperatures of 27C just two weeks ago but suddenly saw temperatures of minus 5C on the nights of April 7 and 8. In La Morra in Piemonte, Barolo producer Alberto Cordero reported on the likely long-term damage inflicted on his vines, all too visible in images he shared. “It depends a lot on the weather over the next 20-25 days. But it’s part of our life. We have to accept it and I do,” he wrote. Yet his wines sell for many multiples of Emilie Faucheron’s.

Faucheron and other southern French vignerons were defenceless against the frost because it is — or at least has been — so rare in their part of the world. Jean-Marc Astruc in Fitou says he has lost 70 per cent of the 2021 crop from his 14ha domaine.

In Burgundy’s Côte d’Or, however, spring frosts have become common, prompting growers to light special burners and anti-frost candles — expensive and none too good for the environment. Some growers also set fire to carefully positioned bales of straw in a bid to disperse the freezing air.

Frost has been so common in Burgundy’s northern outpost of Chablis that some growers have installed spray systems to warm the soil and the vines and then protect them with a layer of ice. This would be far too expensive for vignerons such as the Faucherons.

The same is true of the wind machines that prevent cold air settling in the Napa Valley and in Marlborough, New Zealand. Helicopters have occasionally been hired to protect vines by keeping air moving, while another costly ploy is to heat the wires along which most vines are trained. Such measures are not exactly energy-efficient.

Tradition has it that it is well into May before vine growers can sleep easy without worrying about the risk of further frost damage.

Home Videos The WORLD of WINE – Wine News. Cheap wine, tasting notes and cooking with wine The World of Wine – May 2021 … END_OF_DOCUMENT_TOKEN_TO_BE_REPLACED

How to visit Napa Valley on a Budget. In this video Carson and I explain a few ways to enjoy Napa on the cheap. Tip and advice about how to visit Napa … END_OF_DOCUMENT_TOKEN_TO_BE_REPLACED

Home Videos Get To Know Argentina Wine | Wine Folly If you love Malbec, Argentina is your ultimate wine region. But that’s not … END_OF_DOCUMENT_TOKEN_TO_BE_REPLACED