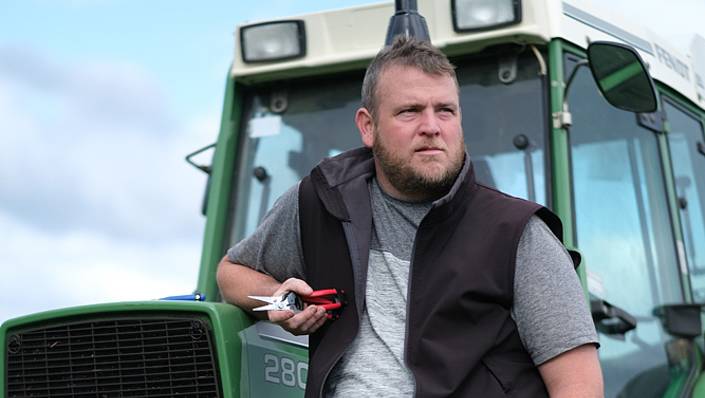 When Queensland uni student Max Marriott caught a flight out of Brisbane with a 35mm camera by his side, few of his peers could have predicted it would be a career-defining move for the talented amateur photographer.

It wasn’t something the resourceful young traveller thought likely, either.

“I’d just turned 21 and my parents gave me an airline ticket to New Zealand as a birthday present,” Marriott explains.

“I fell in love with the place – with its people, its landscapes and its wines. Months later, I went back and explored all its wine regions. That was it. I decided to drop out of my course in mechanical and aerospace engineering and move to New Zealand.”

Now resident in southern Tasmania as co-owner of Anim Wine with his wife Siobhan, Marriott says his New Zealand experiences from 2005 until 2014 were truly life changing.

“I ended up converting a passion for wine and my commitment to applied science into a degree in viticulture and oenology at Lincoln University,” he says.

Marriott recalls his first year of study in Christchurch being followed by vineyard work at Central Otago’s renowned Felton Road. An internship at Tamar Ridge for the 2006 vintage then brought Tasmania and hands-on winemaking into focus. Both roles laid foundations that have remained strong and true until the present day.

“Back then, I was a keen and curious student. My first summer in New Zealand taught me a lot about how to grow Pinot Noir; about how to be at the top of your game in terms of vineyard canopy management.

“I was also introduced to the concepts and practices of organic and biodynamic viticulture. I know it’s an old adage to say that to make great wine, you must first have great grapes, but it’s true. Gareth was able to show there is not only truth in selecting great sites and great grapes, there’s also truth in making wine from the ground up. Viticulture is about growing grapes into world class wines.”

Marriott’s vintage in the Tamar Valley was only brief but provided valuable insights into the new and evolving possibilities of cool climate wine production here. Many of the elegant Riesling, Chardonnay and Pinot Noir wines tasted in Tasmania added new dimensions to Marriott’s experience and understanding of Australian wine.

On completing his degree in 2008, Marriott headed back to the Pinot Noir-clad slopes of Central Otago. Resident not far from Alexandra, the busy viticulturist and vineyard manager soon learned this part of the world was more than just red wine country.

In 2009, Marriott and several industry partners embarked on an ambitious project to make small volumes of discretely different Riesling wines, sourced from a variety of Central Otago subregions. Those Auburn wines wowed the critics with their distinctive, clear-cut expressions of the classic aromatic variety.

In 2011, Marriott added Burgundy’s Vosne-Romanée and Germany’s Mosel Valley to his list of winemaking credits. The next year, he completed vintage in the US wine state of Oregon, before relocating there with Siobhan in 2014. As in New Zealand, critical acclaim duly followed.

“When we discovered we were expecting twins in 2016, we made a decision to repatriate ourselves back to Australia,” Marriott says.

A year later, the couple settled in southern Tasmania.

“Within a matter of months, I accepted a management role at Clarence House, secured a lease on Tinderbox Vineyard south of Hobart and began conducting audits on farms and vineyards across the state on behalf of an accredited organic certifier,” he adds.

“We went from not much happening to all guns blazing.”

With four Tasmanian vintages under his belt, Marriott has begun leasing Windrush at Kingston to facilitate a modest increase in the production of his high quality, single vineyard wines.

“Our family’s Anim project still remains true to its origins,” he says.

“It’s about growing great fruit from each of the three vineyards we lease, manage or oversee. The emphasis is on farming the land organically; on building soil condition and vitality in order to increase plant health. We’re making wines from the ground up; wines that are the product of fruit we’ve farmed ourselves and that are truly unique and expressive of their site.” Nothing much planned for Mother’s Day today? If you’re in the north of the state, make a beeline for Goaty Hill at Rowella. This a very attractive, light-bodied wine to enjoy on a site that offers great vineyard views at any time of year. It comes from the outstanding 2016 sparkling wine vintage.

A Chardonnay-dominant blend, the wine’s engaging and vibrant presence in the glass makes it a welcome aperitif to enjoy among family and friends. Citrus and dried flower aromas herald a dry, neatly constructed toasty palate that has length and texture. It’s a worthy partner for fresh local oysters, too.

Pinot Gris is the flavour of the month in the white wine stakes, but so much of it is just plain dull and boring.

The team at Bay of Fires have worked hard over the years to develop a very attractive dry style with pleasing texture and crisp acidity. After missing a vintage in 2019, the tradition continues with this middleweight from the Derwent, Tamar and Coal River Valleys.

The wine travels smoothly across the palate, with ripe pear and white nectarine fruit showing a touch of spice. It’s a satisfying drop with a very moreish disposition, so gulp with care. Recently named a Top 50 contender in the Young Gun of Wine Awards, Max Marriott is a man on a mission. Having settled in Tasmania four years ago with his wife Siobhan, the former Queenslander is keen to explore the dirt beneath his feet in each of the three vineyards he farms. This is an impressive first release from Windrush, south of Hobart, that delivers finely structured, well-sustained flavour. Indeed, it’s a delightfully aromatic and ethereal expression of Pinot. Fragrant notes of sweet red fruits, charcuterie and sassafras forest showcase a refined and delicate wine of great charm and elegance. Lovely.

Home Videos The WORLD of WINE – Wine News. Cheap wine, tasting notes and cooking with wine The World of Wine – May 2021 … END_OF_DOCUMENT_TOKEN_TO_BE_REPLACED

How to visit Napa Valley on a Budget. In this video Carson and I explain a few ways to enjoy Napa on the cheap. Tip and advice about how to visit Napa … END_OF_DOCUMENT_TOKEN_TO_BE_REPLACED

Home Videos Get To Know Argentina Wine | Wine Folly If you love Malbec, Argentina is your ultimate wine region. But that’s not … END_OF_DOCUMENT_TOKEN_TO_BE_REPLACED