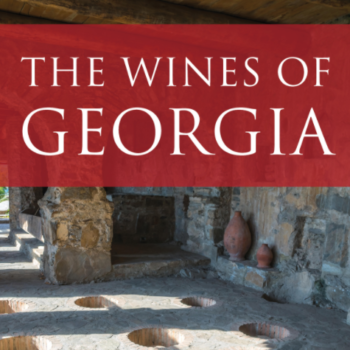 
Ahead of this year’s André Simon Food and Drink Book Awards, db is running extracts of all of the shortlisted drinks titles. First up is The Wines of Georgia by Lisa Granik MW.

Georgians have a tremendous sense of pride, not least in their wines and wine culture. They believe strongly that their land was the birthplace of wine and see wine as a metaphor for their own blood. References and allusions to wine abound in Georgian culture, song, legends, literature, religion and art. Georgians are renowned for their joi de vivre – accompanied and enriched by their association with wine.

Georgia, known to its inhabitants as Sakartvelo, the land of the Kartvelians, has seven different climate zones, forty-nine different soil types and hundreds of grape varieties, all within a country of fewer than 70,000 square kilometres (26,900 square miles), just smaller than the Republic of Ireland and a little larger than the state of West Virginia. It has 8,000 years of wine culture and winemaking history, but, at the same time, its current wine industry is remarkably young – and in a hurry.

Situated at the crossroads between Europe and Asia, with fertile lands and dramatic vistas, over the centuries Georgia has been repeatedly ravaged by invaders from every direction. But the Georgians have resisted and persisted, retaining their native languages, culture, religion and identity. Invaders left their mark, but the Georgians stayed put and rebuilt.

Today, out of the wreckage of hulking Soviet ‘wine factories’, a sophisticated variety of modern wineries has emerged, as well as many more small-scale family winemaking enterprises. A handful in 1997 grew to 400 by 2016, and then exploded to over 1,300 by 2019. Of these, 300 export their wines, with more hoping to jump on this bandwagon. Georgia now produces an array of wines for different consumer tastes.

A resurgence in Georgian traditional winemaking in the past two decades has converged with a renewed interest in things ‘artisanal’, and ‘natural’ products. This has captured the attention of many a wine lover within and outside Georgia and has contributed to the explosion in the number of people deciding to make wine ‘as our ancestors did’.

This presents a great challenge. There is the notion among many that making wine is simple: just pick the grapes, crush them, put them in the qvevri (the clay vessel in which wine is fermented), punch the grapes down a bit, close it for a few months – and abracadabra! Great traditional wine. In fact, however, it is hard. It is not just that winemaking, especially Georgian traditional winemaking, involves hard physical labour. It is hard because it is complicated, involving both science and craft. Many Georgians attempting to make wine in the simplest way have no foundation in wine science. They thus have set themselves up to make wine in the most difficult of circumstances, as often they are not in a position to recognize or understand when something is awry until it is too late. Their final product may be wine, but it is home-made wine, a style of wine that was never intended to be marketed, to withstand the variable conditions of shipping, of competing in an international marketplace.

I have enjoyed many of these home-made wines. Some of them may be natural wines, others not. They may be a bit wild, and are perhaps not the most finessed; they may not be perfectly clear, but can be a tasty, pleasurable drink. Being home-made, however, does not excuse flawed wines, especially when those flaws obscure the expression of variety and terroir. The problem is not traditional wines per se. It is inexperienced or hobby winemaking posing as professional. Ideology is not a proxy for quality.

In many ways, then, these home-made wines cannot be compared to wines made by professional winemakers. Many are unstable and unlikely to look or taste the same after being subjected to temperature changes and sub-optimal transit and storage conditions once the wine producer has seen them off. I would wish, for the reputation of Georgia’s promising winemaking industry, that the producers respect their vineyards and their wines enough to ensure that the wines they sell are the finest they can produce and that they reach the consumer in top condition. Then the consumer can replicate the delicious Georgian experience at home.

I firmly believe that the Georgian wine story deserves to be told. It is not enough (though perhaps it could be) that Georgia is the first documented place for wine production. Nor is it enough that they have hundreds of indigenous grape varieties: if these varieties didn’t make distinctive, delicious wines of place, they wouldn’t matter. But these claims, of which Georgians are deservedly proud, are secondary to their distinctive winemaking culture and traditions that produce wines of a thoroughly different and unique category. These wines deserve to be tasted, understood and enjoyed. They need to be considered on their own terms but held to similar quality standards as other fine wines of the world.

Political changes in the past thirty years and a revolution in communications have brought Georgia out of relative isolation. Georgians have always interacted with foreigners and been influenced by them but, in the end, they have pursued their unique path. This is how they have survived for millennia. And so it will be with their wines in the future. The best of Georgian wine is yet to come. I trust that, over time, with more experience and a deeper understanding of all that makes these wines unique, we will be blessed with an even greater array of fine wines that express the heart, soul and vibrant personality of this very special country.

Reprinted with permission from The Wines of Georgia by Lisa Granik MW. Published by published by Infinite Ideas on 2 December 2019.

All these books have been shortlisted in the drinks category for the André Simon Food & Drink Book Awards 2020. Founded in 1978, the André Simon Food & Drink Book Awards are the only awards in the UK to exclusively recognise the achievements of food and drink writers and are the longest continuous running awards of their kind. The first two awards were given to Elizabeth David and Rosemary Hume for their outstanding contribution in the fields of food and cooking. Other winners include Michel Roux, Hugh Fearnley-Whittingstall, Nigel Slater and Rick Stein. www.andresimon.co.uk

Home Videos The WORLD of WINE – Wine News. Cheap wine, tasting notes and cooking with wine The World of Wine – May 2021 … END_OF_DOCUMENT_TOKEN_TO_BE_REPLACED

How to visit Napa Valley on a Budget. In this video Carson and I explain a few ways to enjoy Napa on the cheap. Tip and advice about how to visit Napa … END_OF_DOCUMENT_TOKEN_TO_BE_REPLACED

Home Videos Get To Know Argentina Wine | Wine Folly If you love Malbec, Argentina is your ultimate wine region. But that’s not … END_OF_DOCUMENT_TOKEN_TO_BE_REPLACED