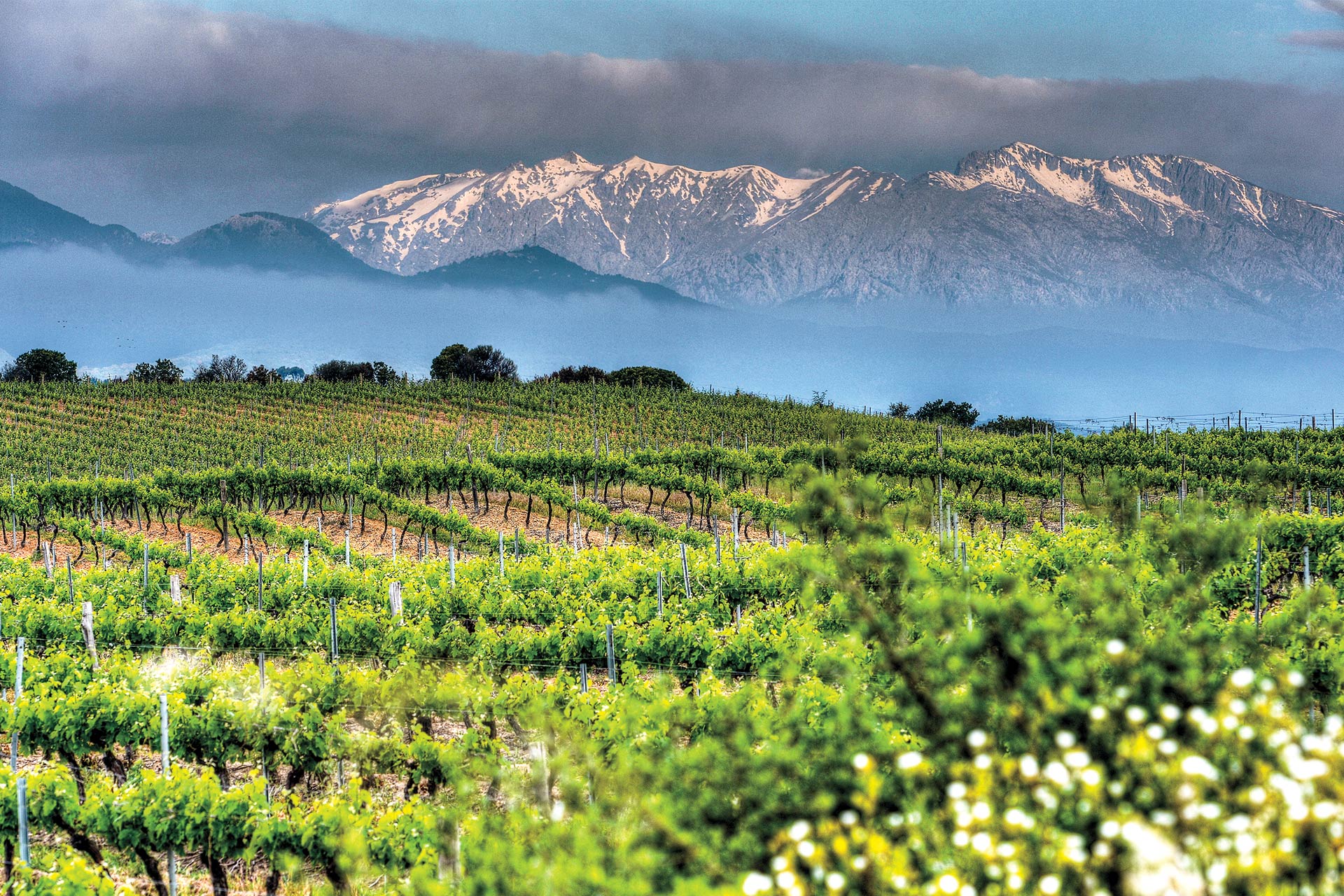 The French call Corsica “Ile de Beauté,” the beautiful island. And indeed, the rugged, mountainous landscape of this Mediterranean isle is spectacular, with mountains in the center, a narrow coastal strip and historic cities. The French territory also holds millennia worth of history, of grapes, invasions and fierce independence.

It breeds wines with connections to both Italy and mainland France, yet they express their individuality and are totally different.

This is an island that’s resurrecting its roots through culture, food and wine. The Mediterranean’s most mountainous isle, Corsica is situated 110 miles southeast of the French Provençal coast, 50 miles west of Italy’s Tuscan coast and just north of Sardinia. Because of its stellar, sometimes scary terrain, it has been left more natural than most islands here, with plenty of native grapes, other flora and fauna.

Corsica is enigmatic, with vineyards and grapes that go back thousands of years and deliver wines that are open, rich and structured. Acres of vines grow grapes for simple rosés , while just a few miles away, impressive red and white wines are made from varieties with names that only a Corsican can really pronounce.

Go in quest of a single Corsican wine identity, and it’s elusive.

“There are many truths about Corsican wine,” says Manu Venturi, owner of Domaine Vico and Clos Venturi, whose organic and biodynamic vineyards are situated in the mountains near the center of the island. But one quality that he and others do identify is the amazing aromatic quality, the sense of wild smells from the maquis, the heathland of herbs and plants that surrounds many vineyards.

Then there is the minerality. Granite rock dominates the landscape and lifts the wines, especially the reds. This stunning landscape has created a cradle for unique wines that need to be explored.

The insularity, the island-ness, is important, says Sandrine Leccia. She and Yves Leccia focus on heirloom vines, some revived from their own organic vineyards in Patrimonio in the north of the island.

“Although we are Mediterranean, we have a freshness and balance to our wines because we are cooler than the continent,” she says.

The reality is that much of Corsica’s wine is cheap and cheerful, made from international French varieties and sold, like rosés for early drinking. Some of these make it to America. This is not the heart of Corsican wine.

Traditional Corsican wine comes from Niellucciu and Sciacarellu grapes for reds, and from Vermentinu and Biancu Gentile for whites. The names are unfamiliar, and even if the origin of some is known (Niellucciu from Tuscan Sangiovese, for example), their transformation into totally Corsican wine is complete.

And that’s just the beginning. There are still many more Corsican grapes to be explored and blended into the great wines of the future.

A history told through grapes

Marc Imbert, second-generation owner of organic Domaine de Torraccia in the east of the island, calls Corsica a “Jurassic Park” of grapes. Varieties survived, clung on and are now coming back to life.

Because of its isolation, Corsica did not suffer as much as mainland Europe did from the phylloxera disease. That helped some of the 40 or so of the ancient varieties, now being trialed, to survive.

The Phoenicians, Greeks and Romans introduced viticulture to the island. The wine business thrived, more or less, depending on the politics of the moment. For years, control shifted between the Italian city states of Pisa and Genoa.

Genoa lacked space and needed Corsica to grow food and wine. The island remained Genoese until the 18th century, when it became part of France. That occurred just in time for Napoleon Bonaparte to be born on the island as a French citizen.

A solid foundation was laid in the 1960s and has truly solidified since the 1990s, as producers return to roots, to origins. There’s experimentation in the vineyards and in winemaking, allied to a belief in a strong Corsican identity.

“Yes, we are French, but the Italian influence is so important.” —Manu Venturi

That’s the future for what has been described by the French appellation overseer INAO, the Institut National d’Origine et de la Qualité, as “the land of legends and magic.” The legends are there, the magic is happening now.

While this grape is genetically identical to Sangiovese, it’s been in Corsica long enough, certainly since medieval times, to acquire a native identity. Dark in color, the wines have a rough, rustic edge when young, but can age exceptionally with bold tannins that give structure and density, maturing into spicy, gamy flavors.

Niellucciu is often blended with Sciacarellu, which has connections to another Tuscan grape, Mammolo. But even more than Niellucciu, Sciacarellu has become acclimatized to its island home. It produces wines that, while pale in color, can have high alcohol and red fruit flavors. Sciacarellu is also in many rosés.

The most widely planted native white variety on the island, it arrived from Greece during ancient times. Known as Rolle in other parts of France, it’s aromatic and fruity, able to make wines for aging as well as early enjoyment. It can even work with wood aging.

One of the many grapes rescued from near oblivion, this is native to Corsica and has been revived since the 1990s. It’s almost exclusively used in blends, where it helps present powerful wines, rich in aromas and tropical fruit flavors.

Originating in the South of France, it’s in the appellation of Muscat de Cap Corse. It makes the aromatic, fruity and sweet wine for which this appellation is famous.

Here is where things get even more interesting. There are so many more varieties out there, many almost lost or forgotten. Some are now in the wines, some still in test vineyards. None will appear on the label. It’s best to ask your retailer.

Carcaghjullu (more simply spelled Carcajolo) Nero, Aleatico, Minustello and Barbarossa are among the reds. Codivarta, Biancone and Genovese for the whites. Corsica recognizes the importance to preserve these varieties and others. Two nurseries, one run by the vignerons and the other privately owned by Antoine Abbatucci of Domaine Comte Abbatucci, are growing them as experiments.

Believed to be the birthplace of Sciacarellu (and 250 years ago, the birthplace of Napoleon Bonaparte), this 600-acre appellation is inland from Corsica’s capital, Ajaccio. It makes light red, black-currant flavored wines and textured, flinty whites as well as fresh, fruity rosés.

There are two types of Corse appellations. One, which stretches down the island’s east coast, is Corse, pure and simple. Its 3,200 acres are planted on the only flat land on the island. You can find reds, white and rosés, of which the reds are by far the most exciting. Many are imported. The other appellations with Corse in their names, dotted around the island, have local places attached: Corse Calvi, Corse Sartène, Corse Porto-Vecchio, Corse Figari, Corse Coteaux du Cap Corse and the famed sweet Corse Muscat du Cap Corse.

This is the wonderfully named Protected Geographical Indication (PGI) for Corsica, which accounts for two-thirds of the island’s production. It’s suited to the single-variety wines that use familiar French grapes: Chardonnay, Sauvignon Blanc, Cabernet Sauvignon and Merlot. Most of these wines are undistinguished. Occasionally, an unusual blend of local varieties will come under this category. Some are imported.

Dense reds, aromatic white and rich rosés. Niellucciu-based reds and rosés and Vermentinu-based whites come from 1,200 acres, almost all organic, on the northern tip of the island.

Find labels from local producers that say Vin de France. These are wines made outside the appellation rules. This category is where some of the most exciting new and indigenous wines fit, the equivalent of Super Tuscans, with bottlings to watch.

Home Videos The WORLD of WINE – Wine News. Cheap wine, tasting notes and cooking with wine The World of Wine – May 2021 … END_OF_DOCUMENT_TOKEN_TO_BE_REPLACED

How to visit Napa Valley on a Budget. In this video Carson and I explain a few ways to enjoy Napa on the cheap. Tip and advice about how to visit Napa … END_OF_DOCUMENT_TOKEN_TO_BE_REPLACED

Home Videos Get To Know Argentina Wine | Wine Folly If you love Malbec, Argentina is your ultimate wine region. But that’s not … END_OF_DOCUMENT_TOKEN_TO_BE_REPLACED