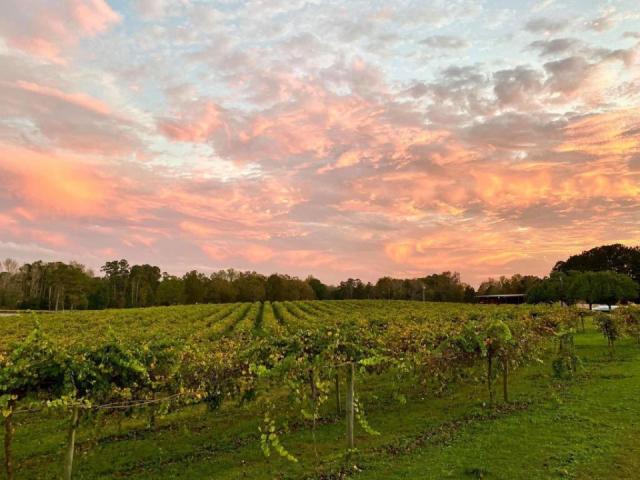 Smithfield, N.C. — Throughout Johnston County is a trail designed for those looking to support local business, and try a tasty drink!

The trail first started as the Muscadine Heritage Trail, before beginning to incorporate local breweries starting around 2014.

“Whether you were making wine, beer, moonshine, rum, whatever, you were going to be looped into that [trail,]” explained Ashby Brame, the marketing and public relations manager for Johnston County Visitors Bureau.

Those who decide to venture on the trail can even win prizes for completing stops at each location. When you stop at a location on the trail, be sure to collect a stamp from the business. If you collect four stamps, you will receive a prize from the Johnston County Visitors Bureau. If you collect a stamp from all seven locations, you can pick out a prize from one of the businesses such as a hat or T-shirt.

“That encourages people along the trail to do more,” added Brame.

Brame said that while it is possible to do the trail in one day, she also recommends picking an area or a product.

“If you want to do it, beer’s your thing, you can visit all three breweries in a day,” she said. “If you want to experience a little bit of everything, then pick the Benson area and do Broadslab Distillery, Fainting Goat Brewery and Gregory Vineyards.”

For those looking to experience rural and city, Johnston County’s location helps offer both, according to Brame.

She added that while people might not be necessarily traveling to Johnston County, people are often still searching for hidden gems to visit while traveling through the county.

“You’re out in the country, and you’re taking these gorgeous two-lane back country roads through what’s essentially farm land. Johnston County is historically, and still is, super agrarian which I think really benefits us. You feel like you’re still discovering something. You’re out of the city, you’re off the highway and I think people still really crave that,” said Brame.

She added that if you are traveling through the county, stopping at a location on the trail won’t take up too much time on your trip.

“We tried to make something like the Beer, Wine and Shine Trail easily accessible … something that adds to your vacation,” said Brame. “There are things that you can discover on your way.”

Learn more about the locations on the Beer, Wine and Shine Trail:

The brewery located at 700 W. Main St. in Clayton is known as “Johnston County’s First Legal Brewery,” according to its website. Deep River Brewing opened in 2013, with its first batch of legal beer produced in the same year.

If you’re hoping to have a snack while sipping on a Abby’s Amber Ale or Touche IPA, you’re in luck. The brewery often has food trucks visit its location.

Fainting Goat Brewery was opened by family friends MaryAnn Duborrow and Tim Reichert in 2015. The brewery has a location in Fuquay-Varina and another location along the trail at 102 W. Parrish Drive in Benson. The brewery also features events throughout the year, including open mic nights, music bingo and food trucks. The brewery features seven core beers such as a Pomegranate Witbier or a BrewQuay Double Buck DIPA or seasonal and rotating beers like a Pecan Maple Porter and the No Kidding Belgian Wit.

The next stop on the trail is for wine lovers. Not only does Gregory Vineyards feature lakefront vineyards, a winery, distillery and tasting room — there’s also a restaurant: Lane’s Seafood and Steak House. The vineyard, which is located at 275 Bowling Spring Drive in Angier, has white, blush, blend, red and fortified whines featuring a North Carolina staple — muscadine grapes. For those wanting to stop at Lane’s Seafood and Steak House, the restaurant has grilled and fried seafood along with ribeye and sirloin steak.

The vineyard, located at 826 Pine Level Micro Road in Pine Level, was started in 1971 by four siblings. Hinnant Family Vineyard’s website says it’s “the oldest and largest commercial Muscadine vineyard in the state of North Carolina.”

The vineyard offers daily tastings, which includes a souvenir glass to take home and — before the coronavirus pandemic — tours of the family-owned vineyard. Another option for visitors is to pick their own Muscadine grapes during the harvest season. Visitors can pick up a bucket and head to the vineyard or purchase a pre-picked bucket.

The next stop on the trail heads over to the land of liquor. Broadslab Distillery is located at 4834 N.C. Highway 50 South in Benson, and makes moonshine, rum and whiskey. According to the distillery’s website, the Broadslab Legacy Shine is “distilled in small batches in a uniquely designed, handcrafted, solid copper pot” while the whiskey is “hand-bottled.” Visitors who sign up for a tour of the distillery also get a free shot glass and tasting of the products.

The distilling company, which offers guided tours, tasting and in-house cocktails. You can visit InStill Distilling Co. at 710 W. Main St. in Clayton.

The Beer, Wine and Shine Trail isn’t doing expanding yet, either.

Brame said additional locations are about to open and would be soon added to the trail.

“We’re probably going to add eight or nine in the next year or two,” estimated Brame.

Home Videos The WORLD of WINE – Wine News. Cheap wine, tasting notes and cooking with wine The World of Wine – May 2021 … END_OF_DOCUMENT_TOKEN_TO_BE_REPLACED

How to visit Napa Valley on a Budget. In this video Carson and I explain a few ways to enjoy Napa on the cheap. Tip and advice about how to visit Napa … END_OF_DOCUMENT_TOKEN_TO_BE_REPLACED

Home Videos Get To Know Argentina Wine | Wine Folly If you love Malbec, Argentina is your ultimate wine region. But that’s not … END_OF_DOCUMENT_TOKEN_TO_BE_REPLACED