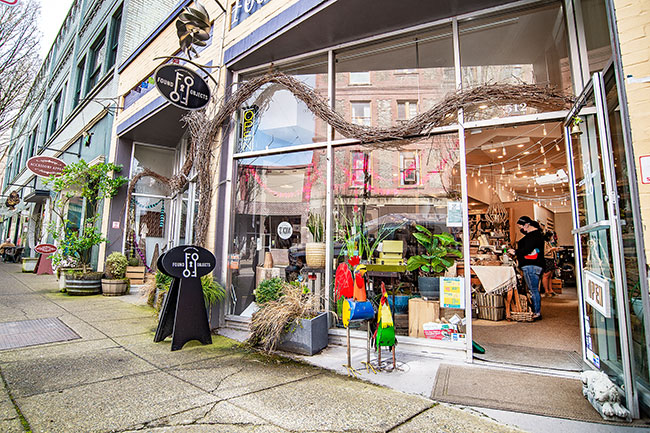 Marcus Larson/News-Register ## Downtown shopper Gwen Hullinger browses a selection of items for sale at Found Objects. With her lease ending, owner Hollyann Finch plans to temporarily move items into her other store, Accessory Appeal, while looking for another location.

McMinnville gift shop Found Objects will soon be moving out of its location at 512 N.E. Third St., next to the Mack Theater.

Owner Hollyann Finch said the store will be open daily until mid-March from 11 a.m. to 5 p.m. with merchandise marked down at least 20 percent.

Afterward, Finch plans to temporarily move remaining merchandise into her other store, Accessory Appeal, located next door. She hopes to find another downtown space for Found Objects.

The building in which Found Objects now is located was purchased last August by Bronze Medal Ventures, which is owned by Third Street Books owner Sylla McClellan and her husband, Corey Guinnee.

They bought the building with the expectation of moving Yamhill Valley Dry Goods, a clothing, shoes and home goods store, from its current home, 416 N.E. Third St. McClellan said they are working on those plans and will announce their next step later this month.

Finch said she is sad to lose the retail space, but plans to encourage and support whatever moves in.

Finch has operated Accessory Appeal for 20 years. She said she always “pined after Found Objects,” and was delighted to have a chance to purchase it from John and Nancy Bahr when they retired in mid-2017.

Finch has run Found Objects with friend Stephanie Johnson, who serves as store manager. “I couldn’t have run both shops without Stephanie,” she said.

During the pandemic, she said, they followed state guidelines and had to close or limit the number of customers at times. But she and Johnson were at Found Objects daily, photographing merchandise, posting pictures on social media, delivering purchases or arranging for customers to pick them up.

Over the summer, when McMinnville’s Dine Out(side) was taking place, the store hosted a tiki bar in front with Lynette Shaw of Bit By a Fox Traveling Speakeasy. The Friday and Saturday night tiki bar not only was fun, but “it pulled us through,” she said.

Kathleen’s Hallmark will remain in its longtime location at 1321 N.E. Highway 99W, McMinnville, in the Town Center shopping plaza.

David Toth and Les Toth, owners of the card, collectible and gift shop, negotiated a new lease with their landlord that will enable the store to stay put.

The Toths have owned the Hallmark store for 11 of the 35 years it has been in operation, all in Town Center.

In late 2020, they announced Kathleen’s Hallmark had lost its lease and would have to move. Customers and other supporters quickly rallied and sent 300 letters to the landlord, asking her to reconsider.

Store employees announced the news of its new lease on its Facebook page this week. They thanked community members for their efforts, saying their support helped persuade the landlord to let the gift shop stay.

In gratitude for the support, the store is giving away 300 thank you gifts today, Friday, March 5.

In Amity, a store will go up at 102 S. Trade St. City officials said the site is being prepared, and construction on the 7,500-square-foot building should start by mid-March. Opening is targeted for September.

The project is estimated to cost about $942,000, according to the construction permit issued by the city. The owner is Hix Snedecker Development LLC and the contractor is Fulcrum Construction Group LLC of Daphne, Alabama.

Another Dollar General store will be built on the east edge of Lafayette at 1260 Third Street (Highway 99W).

An advertisement for the Lafayette store manager’s job was posted on Monster.com in late February.

Yamhill County already has two Dollar General stores, one in Dayton and the other in Willamina. The company has about 17,000 stores in 46 states.

McMinnville Downtown Association is seeking donations to repair and replace lights on Third Street trees that were damaged in the Valentine’s Weekend ice storm.

“They add to the magic of Third Street,” he said, so the MDA hopes to replace them.

Donations can be made through the MDAwebsite,www.macdowntown.com. For more information, call 503-472-3605.

Knudsen Vineyards will celebrate its 50th anniversary by launching an interview series with wine luminaries interwoven in the story of Knudsen’s own history.

“The Outlook from Knudsen Vineyards: Reflecting on the past, present and future of Oregon’s Dundee Hills” will include segments featuring Brian Croser, owner of Tapanappa in Australia’s Adelaide Hills; Véronique Drouhin, winemaker at Maison Joseph Drouhin in Burgundy and Domaine Drouhin Oregon; Rollin Soles, winemaker at ROCO Winery in the Willamette Valley; and others.

An interview with Oregon wine pioneer Dick Erath will open the series on March 9.

Cowles said the series also will “focus on the evolution of the Willamette Valley as a world-class winemaking region, chronicling the early days of a burgeoning wine industry” and speak to the future, as well.

The free, virtual series will run on the second Tuesday of each month, March through August.

Participants can register for one or all of the episodes. For registration and more information, go to /knudsenvineyards.com/virtual-series.

The Yamhill County Association of Realtors is taking applications for its Charitable Foundation 2021 scholarship.

Students who will graduate from Yamhill County high schools this spring are eligible for two $1,000 scholarships.

The application form asks about community involvement and extracurricular activities, as well as school work and future plans.

The deadline is April 21. For more information, go to the website yamhillcountyrealtors.com or send email to ycar@onlinemac.com.

Upcoming Greeters programs will include Ignite Marketing on March 19, and Sears Hometown Store on March 26.

Each Friday, Greeters will run from 8 to 9 a.m. via Zoom. For a link, go to the Chamber website, mcminnville.org.

The Chehalem Valley Chamber of Commerce’s Greeters program also will run from 8 to 9 a.m. Friday, March 12. It will feature the Yamhill County Cultural Coalition.

Links are available at business.chehalemvalley.org.

Home Videos The WORLD of WINE – Wine News. Cheap wine, tasting notes and cooking with wine The World of Wine – May 2021 … END_OF_DOCUMENT_TOKEN_TO_BE_REPLACED

How to visit Napa Valley on a Budget. In this video Carson and I explain a few ways to enjoy Napa on the cheap. Tip and advice about how to visit Napa … END_OF_DOCUMENT_TOKEN_TO_BE_REPLACED

Home Videos Get To Know Argentina Wine | Wine Folly If you love Malbec, Argentina is your ultimate wine region. But that’s not … END_OF_DOCUMENT_TOKEN_TO_BE_REPLACED