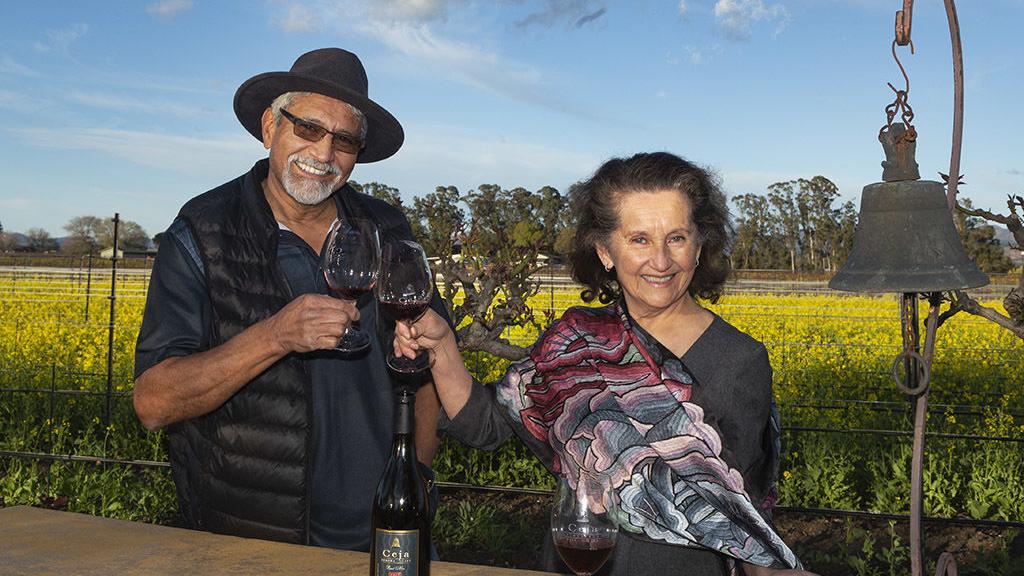 Napa Valley owes much of its heritage and tradition to immigrant families that came in search of a better life and in many cases to pursue their own legacy of growing and producing wine. Since the mid-1800s, the valley’s history is punctuated by multi-national and multi-cultural influences that have flourished through the decades.

A few familiar names are: Charles Krug who emigrated from Prussia and founded his eponymous winery (Napa’s first) in 1861, and Jacob Schram from Germany who followed soon after and became the original founder of Schramsberg in 1862.

As the 20th century approached, Georges de Latour hailed from France to establish Beaulieu Vineyard in 1900. Cesare Mondavi arrived in the valley from Italy through Minnesota and Lodi and began producing Napa wines just after Prohibition in 1933. Louis M. Martini came from Italy to begin making sacramental wines in 1922 and established his St. Helena winery in 1933.

This trend continued through the 1900s and into the new century with other devoted emigres such as Mike Grgich (Grgich Hills), Jan Shrem (Clos Pegase), Piero Antinori (Antica) and others anxious to share their traditions and become part of Napa’s welcoming culture.

But sometimes overlooked is the tremendous contribution of the Hispanic community and their rich history in Napa Valley. Their hard work and hunger to learn new skills enabled many to move from field workers to vineyard management, winemaking and entrepreneurship benefitting Napa’s legacy as well as themselves, their families and ultimately the generations to come.

Amelia and Pedro Ceja, along with Pedro’s brother Armando and his wife Martha, founded the Carneros-based Ceja Vineyards in 1998. Today, the next generation is actively involved in continuing the family’s tradition with a broad range of wines and more than 100 acres of sustainably farmed vineyards in both Napa and Sonoma counties.

As Pedro says, “While we came as immigrants, we now feel a part of the valley’s fabric. We all may have different backgrounds, but our collective experience and heritage contribute to the valley as a whole.”

Amelia, who is the first Mexican-American woman to serve as president of a U.S. winery, is the recipient of countless awards and recognitions by various organizations and publications. She was also recognized by the California legislature in 2005 as Woman of the Year for, “breaking the glass ceiling in a very competitive business.”

The Cejas met in 1967 when Amelia was 12. It was her first day in the vineyard where she was helping her father and, coincidentally, Pedro was assisting his father in the same vineyard.

From that day, Amelia said, “Someday I will own my own vineyard.” Her promise became reality in 1983 when Amelia and Pedro purchased their first land (9 acres) in Carneros. They planted in 1986, and their first harvest in 1988 yielded just enough fruit to make one barrel of wine for the family.

Ceja Vineyards was established in 1998 and under Armando’s winemaking skill, they produced 750 cases that has since grown to 4,000 cases. They use about 20 percent of their vineyards’ production and sell the balance to prestigious wineries in Napa, Sonoma and beyond.

For Amelia, “Hispanic culture has always evolved around the kitchen and multi-generational households so food paired with wine was a treasured tradition.” With this in mind, Amelia has developed a broad following in the community and press that appreciate her search to create appropriate Mexican-based menus showcasing Ceja wines.

Pedro is proud to note that, “In the last 20 years, more Hispanics have begun to initiate their own businesses to realize the American dream through hard work, commitment and perseverance. ”

And to further this quest, the Cejas, along with a few other vintners, founded the Mexican American Vintners Association (MAVA) in 2009 now expanded to 20 members with further growth on the horizon.

Davie Piña is president and general manager of Piña Vineyard Management in Rutherford as well as a partner in Piña Cellars with his brothers Larry and Ranndy and sister-in-law Rickie. The Piña family emigrated from Spain through Hawaii and the Bay Area to Napa in 1912 because, “Land was cheap and there was fruit to pick.”

Davie’s father, John Piña Jr., started the vineyard management company in 1960 with one pick-up truck and greatly benefitted from the Valley’s expansion. They now farm more than 1,000 acres of prime vineyard land for 64 clients and serve another 60 or so with vineyard development and re-development projects. Davie happily states, “We’re proud to carry on the tradition as our business has grown considerably and customer needs have increased dramatically.”

His maternal side, with German ancestry, dates back to 1847 when his mother’s great-grandfather, Bluford Stice, arrived from Missouri bringing his family to Rutherford in 1860. Davie’s mother, Arline Glos was the daughter of Charles Glos who planted one of the Howell Mountain’s early vineyards in 1880. Davie proudly notes, “While we’re a fourth-generation born in the Valley, we’re actually the sixth generation of Napa Valley farmers.”

Davie credits his father’s success partly to his being fluent in Spanish and better communicating with many of the vineyard workers, and attributes his own success to staying ahead of the curve in technology and modern equipment. In 2007 Davie was named “Grapegrower of the Year” by the Napa Valley Grapegrowers and also served as president of the Winegrowers of Napa County. And in his “spare time,” he’s fire chief for the Rutherford Volunteer Fire Department.

Rolando Herrera arrived in Napa with his father as an 8-year-old in 1975 only to return to Mexico in 1980. But, the lure of Napa drew Rolando back in 1982 for he saw life here as an opportunity to grow that did not exist at home. He lived with his older brother, attended Napa High and washed dishes at Auberge du Soleil.

A few years later he was hired by Stag’s Leap Cellars to work on their rock wall. Warren Winiarski recognized Rolando’s intense work ethic and offered him a harvest job, which grew into a 10-year stint that ultimately launched his vineyard and winemaking career. After a few more years with other wineries, Rolando began his consulting business working with Paul Hobbs and other prestigious vintners while also developing his own Mi Sueño (My Dream) brand with his wife Lorena.

Rolando’s intense drive has led him to develop four distinct, but interrelated, wine businesses that he continues to manage with passion and direction. Mi Sueño is his “dream job” and the centerpiece of Rolando’s organization giving him the freedom to make wines of his choosing and style.

Rolando Herrera Consulting works with vintner clients as their consulting winemaker. Herrera Vineyard Management develops and oversees the management of several vineyards and Enterprise Wine Company in Napa is home to a custom crush business now geared specifically to fill the needs of Rolando’s consulting clients.

He is delighted to see the Hispanic community giving back to those in the Valley who kindly offered a helping hand and opportunities to young people in their quest to seek productive lives and growth in the wine industry. For Rolando, “My experience is joy, happiness and the appreciation of the changing culture that I would not trade for anything else.”

Mario Bazán came to Napa in 1973 with the hope of earning $2,000 so he could return to Mexico and open a grocery store that he dreamt would expand to a small chain. To his dismay, he did not earn the money at harvest, so he found other winter jobs in the vineyards.

Mario’s success in establishing both Bazán Vineyard Management and Bazán Cellars with his wife Gloria is the result of his tenacious desire to make life better for himself and his family. He knew satisfying his ever-growing ambition would only come from his ability to constantly learn additional skills enabling him to accept jobs that others could not or would not attempt.

His Napa journey began at Souverain under the wing of Alex Vyborny where he became a truck driver and mechanic. These skills eventually landed him at Mondavi in 1979 where, over the next 15-years, his work ethic and desire to learn led to various vineyard jobs and eventually to becoming a foreman for Opus One and To Kalon.

Mario’s next big move was to Stag’s Leap Cellars where Warren Winiarski encouraged his development as he recognized Mario’s willingness to constantly learn new skills to advance. Mario observed the success of others in the Valley and wanted a path forward for himself. In 1997 he established Bazán Vineyard Management and in 2005, harvested the inaugural release of Mario Bazán Cabernet.

Mario is hopeful about the next generation as more Hispanic youth are now attending college and forming solid foundations for their future. He says with emotion, “I never imagined the life I have today. It’s far more than I ever dreamed of.”

These stories represent a small sampling, and are just a representative cross-section, of the Hispanic contribution to Napa Valley’s thriving wine industry. In addition to a strong work ethic, the three words offered repeatedly from the contributors to this column are: opportunity, education and community.

CHECK OUT THE MOST READ WINE STORIES OF 2019

Share your experiences with other readers by commenting on this article with an e-mail to me at allenbalik@savorlifethroughwine.com.

Allen Balik, a Napa resident, has been a wine collector, consultant, author, fundraiser and enthusiast for more than 35 years.

Home Videos The WORLD of WINE – Wine News. Cheap wine, tasting notes and cooking with wine The World of Wine – May 2021 … END_OF_DOCUMENT_TOKEN_TO_BE_REPLACED

How to visit Napa Valley on a Budget. In this video Carson and I explain a few ways to enjoy Napa on the cheap. Tip and advice about how to visit Napa … END_OF_DOCUMENT_TOKEN_TO_BE_REPLACED

Home Videos Get To Know Argentina Wine | Wine Folly If you love Malbec, Argentina is your ultimate wine region. But that’s not … END_OF_DOCUMENT_TOKEN_TO_BE_REPLACED