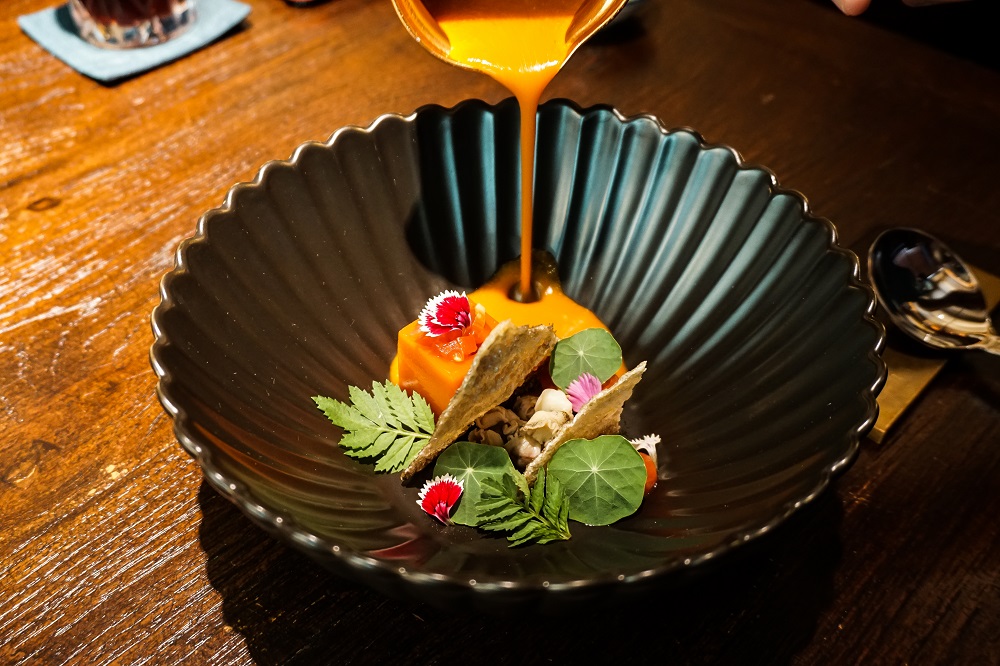 After it was forced closed by the pandemic, a Soi Sukhumvit 11 restaurant went into a cocoon and has now reemerged a little different to survive not just the second wave, but being choked off from the soi’s supply of foreign visitors.

Known for fronting a rail vibe and lesser-known eastern Thai cuisine with inventive twists, Burapa has survived the fate of nearby joints that called it quits after sustaining big losses – it had to close eight months in total since last year – and embracing a new format.

“During the pandemic, I had a lot of time to sit still and think about things I haven’t done before. Now is the perfect time for me to do them, and the tasting menu is one thing on that list,” said chef-owner Wongwich Sripinyo, who was born and raised in Trat, Thailand’s easternmost province and source of the restaurant’s flavors.

“It’s great that people know about us for our train-themed setting, but we also want to tell a story better through our dishes, a story that’s Wongwich’s DNA after all,” said  Nontawan Chitwattanagorn, the other half of Burapa and Wongwich’s life.

Since it reopened earlier this month, Burapa has added a tasting menu to its a la carte menu. Imagine the rail journey to Trat the restaurant took diners on switching tracks and heading into the north with 10 new courses that share the characteristics of both regions.

The first recipe lands in a tray bearing three bite-size pieces. Wongwich suggested diners start from the right with crab salad on a squid ink-soaked sago cracker (“Its mild tanginess will turn on your palate.”). In the middle, a tart of smoked catfish, chili paste and herbal relish. The starter plate finishes with an oregano-like aroma and flavor thanks to the Indian borage leaf wrapping filled with shrimp curry relish, toasted wild almonds, coconut shreds, shallots and lemongrass.

The culinary travelogue carries on with a rarely heard northern dish called Kaeng Kradang, or jellied pork curry, given a colorful, eastern adaptation with a thickened, bright orange-hued tomato consomme that’s poured onto jellies made from sake-infused tomatoes and curry paste. The deep-fried fish skins are sandwiched over boiled whelk, a type of sea snail found off Thailand’s coasts.

Many who’ve been to the north can attest to its iconic dishes: kaeng hung-lay (red curry stew with pork belly) and khao soi (coconut curry noodle soup). Both see some artistic  license taken to become Grilled squid filled inside with minced pork and red curry paste, inspired by sai-ua northern sausages, served alongside spicy dipping sauce for the even more burning sensation and Curry Noodle with Beef Tongue that brings to the fore rich, creamy curry and round egg noodle matched with tender beef tongue dices and a satisfyingly crispy stripe of deep-fried climbing wattle.

What looks like green caviar in the next dish is actually duckweed, an aquatic flowering plant that grows in the north. Together with toasted rice powder, it adds a nutty flavor to the Horm Khai Pham, an onion soup ringing a sous vide egg yolk. The sweetness comes from wild honey and mulberry jam hidden at the bowl’s bottom.

The last course comes in a heavy pair: a rice dish and a tea cup. Wongwich has revamped Khao Gan Jin, a northern recipe of rice mixed with pork and pork blood steamed in banana leaf, into stir-fried rice with pork blood, shrimp paste, herbs and medium-rare picanha cuts. Served together with the dish is a tea cup containing sea snails simmered in herbs and Mekhong rum.

Save room for dessert, if you still can. The journey ends on an exceptionally sweet note of fragrant pumpkin ice-cream smoked with a scented candle. Served in an open coconut shell, the scoops are spiced with ginger crumbs, sesame crackers and caramelized wild almonds.

Burapa is currently open only on Friday, Saturday and Sunday. Tasting menu sessions require reservations in advance. The venue is located on Soi Sukhumvit 11, a short ride from BTS Nana.

If you’re gonna share your opinions for free on the Internet, why not do it for a chance to win some exciting prizes? Take our 2021 Coconuts Reader Survey now!

Home Videos The WORLD of WINE – Wine News. Cheap wine, tasting notes and cooking with wine The World of Wine – May 2021 … END_OF_DOCUMENT_TOKEN_TO_BE_REPLACED

How to visit Napa Valley on a Budget. In this video Carson and I explain a few ways to enjoy Napa on the cheap. Tip and advice about how to visit Napa … END_OF_DOCUMENT_TOKEN_TO_BE_REPLACED

Home Videos Get To Know Argentina Wine | Wine Folly If you love Malbec, Argentina is your ultimate wine region. But that’s not … END_OF_DOCUMENT_TOKEN_TO_BE_REPLACED